Iowa and Iowa State football players will wear uniforms Saturday that are part of Nike deals totaling $2.9 million this year. 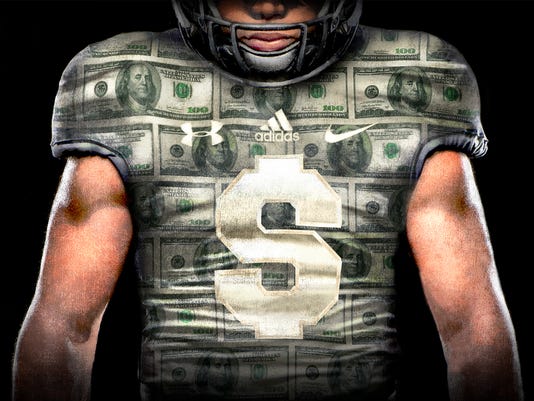 Iowa and Iowa State football players will wear uniforms Saturday that are part of deals totaling $2.9 million this year between Nike and the state's two largest universities.

That’s a lot of loot and apparel for the schools, and tons of branding for Nike's worldwide apparel empire.

“Our Nike partnership is a critical part of our athletics program,” Iowa State athletic director Jamie Pollard wrote in an email to the Register. “It helps contain costs (all of the shoes and equipment we receive), helps recruiting (Nike is clearly the No. 1 shoe and apparel company in the world), and is great for our image as our coaches and staff appreciate being associated with the No. 1 brand in the world.”

It's also just a fraction of what the schools will make on their next apparel deals.

“As long as you’re in a Power Five Conference (as both are), the odds are good that your next contract will be pretty high," said Kristi Dosh, founder of BusinessofCollegeSports.com. 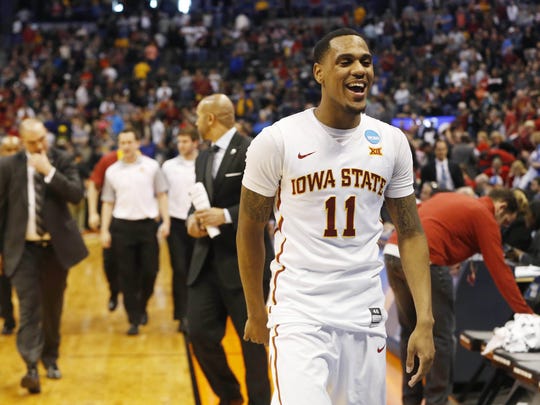 Iowa State guard Monte Morris (11) celebrates as he comes off the court Saturday, March 19, 2016, during the second round of the NCAA men's basketball tournament at the Pepsi Center in Denver. (Photo: Michael Zamora/The Register)

The majority of the payout comes in the form of apparel for each athletic department's use.

In reality, those dollars are peanuts compared to what's offered in the new contracts for powerhouse colleges. Last October, Texas and Nike agreed to a $250 million deal for the next 15 years. In April, Michigan signed with Nike for what could amount to $173 million over the next 15 years.

“The ceiling always seems to remain just out of reach, because of new product categories, ongoing creativity, and broadened reach beyond hard-core fans,” said David Carter, executive director of the USC Marshall Sports Business Institute. “Add to this the competition among apparel manufacturers, and the rates continue to escalate."

Neither expert offered a guess on the potential size of new contracts for Iowa and Iowa State, but said the market value would relate to their place among major college athletics. In January, Illinois and Nike reached a deal worth $44.5 million over 10 years, for example.

“Every deal is different, but typically, you see growth in new contracts,” Dosh said. “How much growth depends on many factors, including the popularity of the schools, and how visible they are in major media markets.”

Michigan's visibility increased significantly, for instance, when Jim Harbaugh took over as its football coach. He has a household name due to his success and mercurial nature.

"Coaches can be a huge part of apparel deals, both in terms of appeal of the program and sometimes by actually participating in the negotiations," Dosh said. "Harbaugh obviously brings a lot of national attention to the program with his comments and actions, and that’s important to anyone who wants to partner with Michigan."

Dosh said appearance in major events — like a Rose Bowl in football or an NCAA Tournament Elite Eight in men's basketball — can be valuable during an apparel contract renegotiation.

"Those types of appearances can be huge if the TV ratings are good, and especially if the team wins," Dosh said. "The school can use that to make the case that the current brand is strong and has national appeal. They can also use it to show the type of exposure the apparel brand can expect."

Nike outfits 70 percent of the Power Five Conference schools, according to published reports. The other competitors in college football’s apparel and equipment world are Under Armour and Adidas.

Nike is worn by 14 of the 24 athletic teams in the Big 12 and the Big Ten. Four have Adidas contracts, and six are with Under Armour. One of the Big Ten schools wearing Under Armour, Maryland, is the alma mater of the company's CEO, Kevin Plank.

The competition is a good thing for schools like Iowa State and Iowa.

“Adidas isn’t fighting real hard,” Dosh said. “Under Armour wants to grow its space in college athletics. Under Armour presents a threat for Nike, and an opportunity for schools.

“Their existence and their being so hungry and so interested in college athletics could force Nike to add bigger deals when schools sign their next contracts.”

The combined $24 million in cash plus apparel that Nike pays Iowa State and Iowa over the duration of their contracts goes into the schools' athletic department budgets.

“We do not earmark revenues,” Pollard said. “It is just another source to help us fund our $75 million annual budget.”

State Board of Regents policy requires Iowa State and Iowa athletic departments to operate independently of the university’s general budget.

“We don’t assign revenue that comes to the department from Nike to specific expenses in athletics,” Iowa athletics director Gary Barta said. “We take in all revenue sources, and balance them against all expenses.”

Apparel contracts are one of the most fertile revenue streams available to universities. What do Iowa and Iowa State have to do in return? Put the swoosh almost everywhere.

That's what apparel giants get from these deals — exposure, and lots of it. 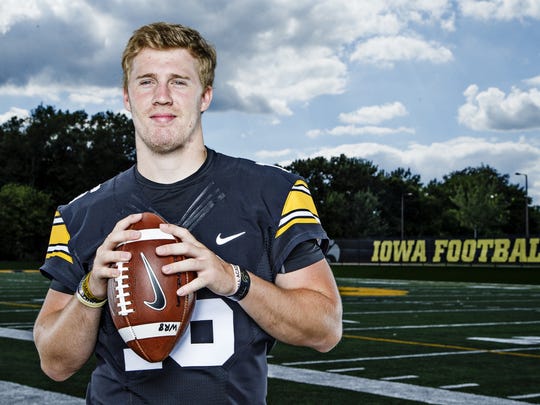 Iowa senior C.J. Beathard is on the "watch list" for the Manning Award given to the best quarterback in college football. (Photo: Brian Powers/The Register)

Just about everything noticeable that athletes and coaches wear during practices and games sport the Nike logo. So does athletic equipment — ranging from the footballs quarterbacks Joel Lanning and C.J. Beathard throw in Saturday’s game, to the shoes Cole Netten and Keith Duncan wear while kicking extra points.

“Beyond (media) exposure, the authenticity associated with aligning with these programs is immense, as is the apparel manufacturer’s on-campus and online presence — both of which reinforce the association and serve as important sales channels,” Carter wrote in an email to the Register.

“Moreover, certain star athletes may develop a strong brand affinity, one that will result in their loyalty to the company once turning pro.”

“Apparel contracts with schools are cheaper advertising for the companies,” Dosh said. “In comparison, it’s cheaper than running commercials on television.

What can Iowa State and Iowa do to break into the big-money apparel contract elite?

“Win consistently in a variety of high-profile sports, while simultaneously running a clean program,” Carter said. “Even as this occurs, though, their small market sizes hinder a truly meaningful upside.”

Both athletics directors clearly stated — and restated — their satisfaction with Nike.

“We have been partners for years and look forward to continuing our partnership for years to come,” Pollard said. 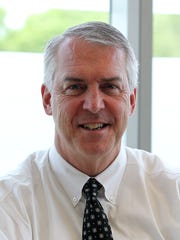 Iowa athletic director Gary Barta poses for a photo in his office at Carver-Hawkeye Arena on Friday, May 27, 2016.  (Photo: David Scrivner/Iowa City Press-Citizen)

His school’s Nike deal doesn’t expire until the next decade. At Iowa, it’s a different story — and potentially a different financial story.

“I’m not even focused on leverage,” Barta said. “We have, and we’ve had, a great, longstanding relationship with Nike that’s not up until 2018.

“We’ll have great conversations with our current partner. The market will be discussed.

“As of now, we love the relationship we have with Nike.”

Randy Peterson, senior sports reporter, has been with the Register for parts of five decades. Randy writes opinion and analysis of Iowa State football and basketball. You can reach Randy at rpeterson@dmreg.com or on Twitter at @RandyPete.

“First and foremost, we want to make sure our student-athletes have the best apparel possible to compete in, and to train in,” Iowa athletics director Gary Barta said. “They’re wearing something that gives a great look for our brand.”

The performance bonus from Nike to the school includes $25,000 for a men’s basketball appearance in the Final Four, and $50,000 for an NCAA Tournament championship.

Nike also pays Iowa from $5,000 to $20,000 if the football team finishes second through fifth in a season’s final poll.

All footwear and equipment, according to the contract, is purchased at 10 percent below wholesale pricing.

Uniforms are purchased at wholesale.

The contract escalates to a total of $1.5 million in apparel and cash in the 2018-19 school year and to $1.76 million during the contract’s final three years.

The performance bonuses for the football team are $2,500 for participating in the Big 12 Conference championship game and $5,000 for winning that game, and $10,000 for playing in a BCS bowl and $30,000 for winning the national title.

Women’s basketball incentives are the same, except that it’s $25,000 for winning the national title. 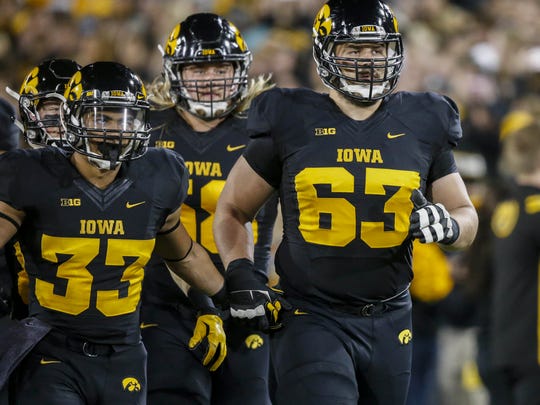 Iowa wore alternate "Blackout" uniforms Nov. 14, 2015 for its home game against Minnesota. The Nike Pro Combat uniforms included black jerseys and black pants, a departure from the traditional combination with gold pants, and "IOWA" across the chest, which was also a change. (Photo: Bryon Houlgrave/Register file photo)

“It’s another (replica) jersey that fans can buy,” said Kristi Dosh, founder of BusinessofCollegeSports.com. “It’s another jersey with Nike on the front of it.”

Iowa State and Iowa officials won’t disclose if their football teams will wear alternative uniforms this season, although Cyclones coach Matt Campbell has already said his team occasionally will wear a nontraditional white helmet. There might be nontraditional uniforms, too.

“We might mix it up,” he said during a May interview with the Register. “It’s what today’s players like.”

Iowa officials aren’t telling, either, while making the point that they lean toward routine.

“In the big picture, Kirk (Ferentz) and I both love the traditional football uniforms,” Iowa athletics director Gary Barta said. “On occasion, we’ve tried something unique, but as for this season — we’ll have to wait and see, but generally, I think our uniform does a great job withstanding the test of time.”