The high-profile Hawkeye coaches testify for the defense in Jane Meyer's discrimination lawsuit against the University of Iowa. Both were upset about Meyer's performance during building projects for their teams.

Jane Meyer, who spent 13 years as the highest-ranking woman in UI's athletic department, is suing over the loss of her job, claiming discrimination based on her gender and sexual orientation, and retaliation after she complained about the situation.

Football coach Kirk Ferentz was guarded in his language, saying, “it seemed like there was a lot of turbulence at times” when he and his staff dealt with Meyer, who was the second-ranking administrator in the department.

Wrestling coach Tom Brands was blunt, describing communication with Meyer as “a one-way street. It was zero follow-up.”

Meyer is suing the university over the loss of her job, claiming she was the victim of discrimination and retaliation. Her trial at the Polk County Courthouse will enter its third week Monday.

The defense began presenting its case Friday, first with Brian Ferentz, Kirk’s son and the Hawkeyes offensive coordinator. Brian Ferentz’s testimony was brief, as he admitted he has never worked directly with Meyer.

Kirk Ferentz took the stand next and highlighted his disharmony with Meyer, particularly surrounding the building of the Hawkeyes’ new football practice facility. Meyer was in charge of athletic construction projects for much of her 13 years of work in the department.

Ferentz described an instance during fundraising efforts for the $55 million complex that opened two years ago, when he asked Meyer for a drawing of what he was envisioning to show potential donors. He wanted something akin to the Oklahoma facility he had toured, which touted the Sooners’ football accomplishments with banners on the walls.

What he received was so unsatisfactory to Ferentz that he felt he couldn’t even use it.

“It was a memorable moment. I think we missed the mark on this whole thing,” Ferentz said of the architectural rendering. “It’s very generic on the walls and not really what we were trying to get. … It wouldn’t resonate (with donors)."

Ferentz said his disenchantment increased during construction as he was told they couldn’t add a nutrition station to the weight room, and issues arose with the sauna and the landscaping. He said he was told Meyer was the roadblock.

Ferentz said he was ultimately happy with the way the building turned out and that he never spoke with Meyer directly about his concerns. 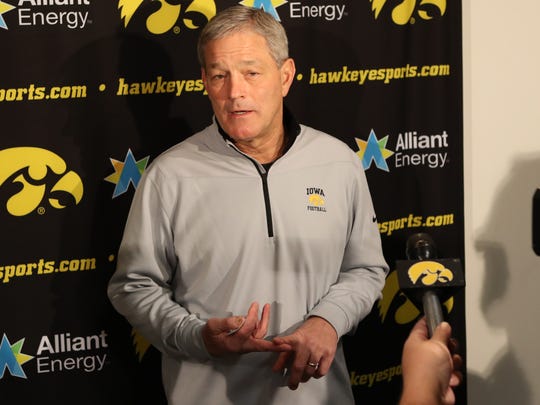 Brands also butted heads with Meyer over a construction project, this one the 2010-11 renovation of Carver-Hawkeye Arena.

“It was a mess because Jane Meyer inserted herself as an expert,” Brands said of that yearlong process. “We live and train in the facility. We knew the direction we wanted to go.”

Brands said he felt shut out of the decision-making, with Meyer telling him at one point that he could no longer tour the wrestling complex during the reconstruction phase for safety reasons. He said he was on the periphery while plans were changing, walls were going up and he could tell the space was not adequate for what he wanted. He said Meyer would seem to be responsive to his complaints, but then it was “like the conversation never happened.”

Brands said he was unhappy with the locker room, the size of his facility and “the flow of it.” He said the drainage in the showers became a lingering issue because Meyer was “adamant” about a trench drainage system and rejected his idea of drilling two holes in the floor and relying on gravity to provide an outlet for the water.

He said it got “to the point where it was funny to me, but not funny.”

Eventually, Brands said, the showers leaked onto the desk of the office one floor below the wrestling room.

“The cleanliness, the hygiene was a disaster,” he said.

When Brands wanted to get things done, “My first trip was not to Jane Meyer’s office,” he said. “Wrestling was an afterthought.” 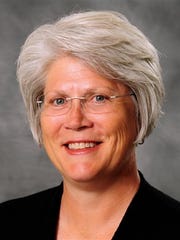 Jane Meyer won $1.43 million in a lawsuit against the University of Iowa. (Photo: Press-Citizen file photo)

“Thanks for all you do on our behalf,” read Ferentz’s note, which was undated.
Brands wrote Meyer in December 2007: “I want to thank you for the time you give me whenever I call …”

Newkirk also pressed Friday’s witnesses on whether problems related to construction projects were the sole fault of Meyer, or whether athletic director Gary Barta should have received some of the blame.

The final witness Friday was former Iowa associate athletic director Mark Jennings, whose office was next to Meyer’s. He testified in a video deposition shown to the eight jurors that Aug. 4 and 5, 2014, were the two “most uncomfortable” days in his 37-year career at Iowa.

Aug. 4 was the day Barta fired field hockey coach Tracey Griesbaum, who is Meyer’s partner and is also suing the university for discrimination.

Jennings said on both those days Barta entered Meyer’s office for a closed-door conversation. He said he could hear Meyer through his wall and even in the hallway.

“Jane was screaming at Gary like I couldn’t believe,” Jennings said. “I felt bad for Gary. I would never even think of such a thing. And if I did I would expect to be gone the next day.”

Jennings later said that the outbursts were out of character for Meyer, and that the two worked well together before Griesbaum's termination.