The 3-point arc is this Hawkeye's new home. 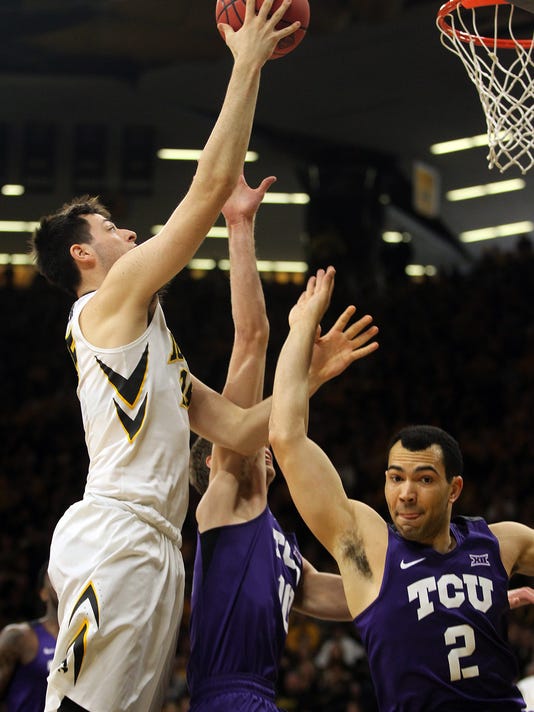 Iowa basketball fans have seen forward Ryan Kriener do this -- soar above defenders for a close-range shot. But this year they may see him taking more 3-pointers, a facet he's working to add to his game.(Photo: David Scrivner/Iowa City Press-Citizen)Buy Photo

WATERLOO, Ia. — Jordan Bohannon and Ryan Kriener are reversing roles this summer as teammates in the Prime Time League.

Right down to the beard. This year, it’s Bohannon, Iowa’s baby-faced point guard, who is showing off the whiskers. Last winter, Kriener, a 6-foot-9 power forward and Bohannon’s roommate, did so.

The Hawkeye sophomores showed some new wrinkles to their game Thursday at the Sportsplex. Bohannon is trying to score more from closer range and he spent as much time driving to the hoop as he did spotting up from the arc while playing all 40 minutes in his team’s victory. Bohannon scored 29 points, making 5 of 11 from 3-point range and matching that with 5 of 11 shooting inside the arc.

Driving to the basket and improving his defense are his main objectives this summer, the 6-foot Bohannon said. He figures that will open up his outside shooting even more, forcing defenders to play him more honestly, while also opening opportunities for assists to taller teammates like Kriener.

Kriener, meanwhile, is stretching himself by adding range to his shot. On Thursday, his first two attempts were 3-pointers. He made the second, and later showed off a hook shot he is working on.

“I’m trying to really work on what I had in the mid-range and pull it out to the 3-point (line) this year,” Kriener explained. “It’s something that (coach Fran McCaffery and he) talked about in the postseason meeting. He said that he thinks I can take a really big step in my game because it spaces the court more from 3, than mid-range.”

Assistant coach Kirk Speraw is working with Kriener on his hook shot. Kriener said it’s one way to take advantage of his high-jumping skills.

“I was a high jumper in high school so we can really utilize that and elevate over” defenders, said Kriener, who participated in both sports at Spirit Lake High School.

Kriener said he once cleared 6 feet, 6 inches in a high school practice, and if he hadn’t chosen to play basketball in college, he would have competed in track.

Those days are behind him now. Kriener has added 15 pounds this offseason — he's up to 252 — knowing he needs more upper-body mass to compete with post players in the Big Ten Conference. He averaged 3.1 points as a freshman, playing much of the time on the low block. This year, Kriener said he expects to become a prototypical “Stretch 4,” and that he’ll probably scale down to 245 pounds by the time the season begins so he can do a little more running.

Kriener, like all Hawkeye post players, is being pushed for playing time by incoming freshmen Luka Garza and Jack Nunge. He knows he’ll need to earn his minutes in a crowded frontcourt.

“You’ve definitely got to go out and fight every day,” Kriener said of summer practice sessions. “Coach was saying all the versatility you can show, if you play different spots, it’s going to help you the most. That's why I’m trying to stretch my game out to the 3-point line.”

Bohannon approves of that message. He said he is constantly urging Kriener to shoot more, not that Kriener needs the prodding.

“We do a lot of pick-and-roll. That’s going to help us in-season as well,” Bohannon said of Kriener. “I want him to shoot the ball more because he has such a really good shot. When he hits the 3, the big guys come out on my ball screens, so I’ll be able to look for even better reads.”

Bohannon has compared Kriener to former Wisconsin star Frank Kaminsky. He said there’s more to his friend’s game than Iowa fans have gotten to witness.

“As the season went on (last winter), he was just dominating our scout team. We couldn’t stop him,” Bohannon said. “He’s just a really skilled guy. He’s going to be really special these upcoming years.”