Uh, oh, Hawkeye fans — a star cornerback is suspended for the season opener against one of the nation's best quarterbacks...

Iowa's defensive coordinator says he's pleased with his cornerback's response, though the Hawkeyes will be without one of their top defenders against elite quarterback Josh Allen.

Manny Rugamba (5) celebrates an Iowa safety against Michigan last season, when the true freshman had a breakout game. Now a sophomore expected to start, Rugamba has been suspended for the Hawkeyes season-opener against Wyoming for a violation of team policy.(Photo: David Scrivner / Iowa City Press-Citizen)Buy Photo

IOWA CITY, Ia. — The Iowa football team suffered another crippling loss in its secondary Tuesday when coach Kirk Ferentz announced that sophomore cornerback Manny Rugamba will be suspended for the Sept. 2 season opener against Wyoming for “a violation of team policy.”

That means the Hawkeyes will be without their top three cornerbacks from a season ago — Desmond King and Greg Mabin graduated — when they take on one of the nation’s best quarterbacks in Cowboys junior Josh Allen.

In addition, Iowa is breaking in a new free safety in junior Jake Gervase after Brandon Snyder suffered a torn ACL during spring practices.

Sophomore Michael Ojemudia will make his first career start against Wyoming, subbing for Rugamba. Opposite him will be junior Joshua Jackson, whose starting debut came in January’s Outback Bowl loss after Rugamba suffered a shoulder injury.

“Manny’s done a great job. He’s owned up to what’s going on. I think he’s going to look forward to this as a learning process,” Iowa defensive coordinator Phil Parker said of Rugamba’s transgression, which occurred during the offseason. “I think he’s taken it as a challenge to himself, as being a leader, being on our scout team and helping our offense out for the first game.” 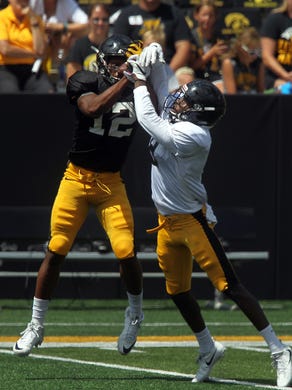 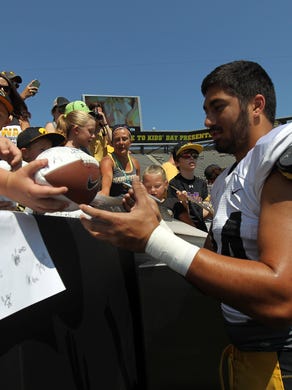 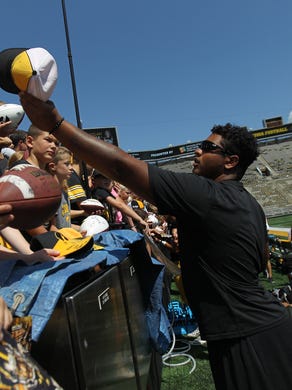 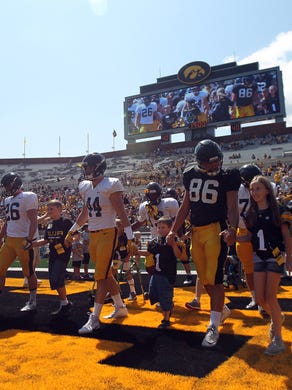 Rugamba intercepted two passes last season as King’s understudy, making a big impact as a true freshman and establishing himself as a star in the making. Rugamba said on Iowa’s Aug. 5 media day, when he was already aware of the looming suspension, that he is concentrating on staying humble.

True freshman Matt Hankins is poised to serve as Iowa’s third cornerback against Wyoming. The Texas native has been one of the surprises of the team’s summer camp. Redshirt freshman Cedric Boswell also may get some spot duty.

Allen passed for 3,203 yards and 28 touchdowns last season, and has been mentioned as a potential No. 1 overall pick in next spring’s NFL draft. He averaged 15.3 yards per completion to rank sixth in the nation and helped the Cowboys convert on 90.6 percent of their red-zone chances, which was second nationally.

He will be a stout test for the Iowa defense — even more so with Rugamba only able to watch.

“We’ve had three guys playing well in camp, so the challenge is, really, to find a fourth guy, and fifth,” Ferentz said of his cornerbacks. “We’ve got time to make those decisions, too. We’ve known about this, so we’ve been working with that in mind. We’ll be ready.”

“Everybody has issues sometimes and they’ve just got to learn how to deal with it,” Parker said of Rugamba’s situation. “The reason why I became a coach is to help these guys out. It’s our job to do that. Sometimes you’ve got to set examples and sometimes that helps other guys along the way.”

USA TODAY Sports' George Schroeder breaks down all the action from the Big Ten's Media Days in Chicago.