A 47 percent 3-point shooter a year ago, Ellingson knows 'I have to be more aggressive.' 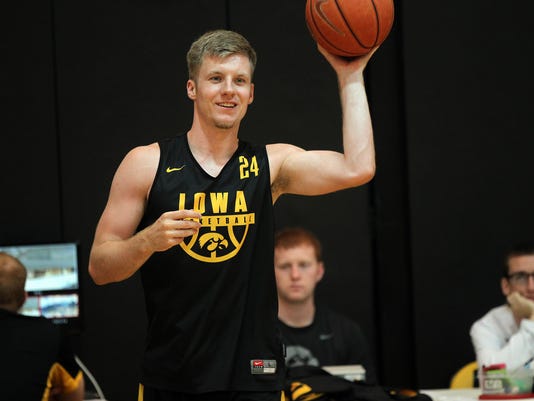 Brady Ellingson was a proficient shooter as a Hawkeye sophomore but averaged only 4.4 points per game. With shooting guard Peter Jok gone this year, he knows he must at least double his output.(Photo: David Scrivner/Iowa City Press-Citizen)Buy Photo

IOWA CITY, Ia. — There was no such thing as an “average” game for Iowa shooting guard Brady Ellingson last year.

He averaged 4.4 points per game but was scoreless in 11 of them, reaching double figures in six others.

“I know that I have to be more aggressive than last year,” said Ellingson, a junior who is one of the most experienced Hawkeyes entering the 2017-18 season, which begins with a 7 p.m. exhibition game Friday against Division II William Jewell. “I definitely have to hunt my shot more and make more plays. In high school, I did it. So I know I have it in me.”

Ellingson, who played at Hamilton High School in Sussex, Wisconsin, is a key figure for the Hawkeyes, coming off a 19-15 season. Shooting guard Peter Jok has graduated, taking 19.9 points per game with him. Sophomore Isaiah Moss figures to get the first crack at trying to fill that production. But, for as deep as Iowa is in the front court, there’s not as many bodies vying for time in the backcourt.

Ellingson, a 47 percent 3-point shooter a year ago, knows that expectations are higher for him. He’s the Hawkeye player most adept at stretching the floor.

When he’s willing to shoot.

Ellingson attempted just 68 3-pointers last year, an average of two per game. He was a perfect 18-for-18 from the free-throw line, but didn’t take a single one in Iowa’s final 15 games of the season. He is selective about when to shoot and when to drive, sometimes to a fault.

The positive aspect of his cautious play is that he committed only 14 turnovers; the negative was those 11 scoreless outings, including the final three of the year.

“I know that my reputation is being a shooter and I value that and work at it hard,” said Ellingson, noting that coaches are constantly telling him to be more selfish on the court.

“It’s a good thing that they have faith in me and they want me to shoot.” 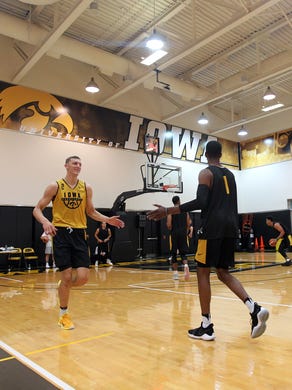 More: Why pipsqueak PG Bohannon is the most indispensable Hawkeye

Ellingson averaged 14.2 minutes per game last year, with one impressive four-game stretch in Big Ten Conference play in which he scored 39 points while playing 100 minutes. The Hawkeyes won three of the four games. It was the high-water mark for Ellingson on the year, but he said it showed him what he’s capable of doing.

Now he wants to build on that. He would like to be a starter this winter; if not, he certainly wants to average more than 20 minutes per game. He attempted 111 shots a year ago, but sees no reason why he can’t double that output this season.

Ellingson is also prepared to take a backseat to younger players if that’s what the coaches determine is best.

“I’ve never been on a team with this much depth. In practice, it’s fun. It’s really intense and we’re getting after each other,” he said. “You’ve got to earn your minutes. There’s no other way to say it.”

How much time Ellingson earns will be one of the most intriguing story lines of the Hawkeyes’ season. The team was picked to finish eighth in the Big Ten in a preseason media poll. Ellingson, one of only three fourth-year players in the program, said the players are quietly aiming much higher.

“We want to win the Big Ten championship, regular season and tournament. I think we can do it,” Ellingson said.

“We don’t want to make any headlines or boast about it. We keep it in the locker room and have great confidence in one another.”