'They were kind of timid in the backcourt,' one Hawkeye says of a Bulldogs team that committed 19 turnovers. 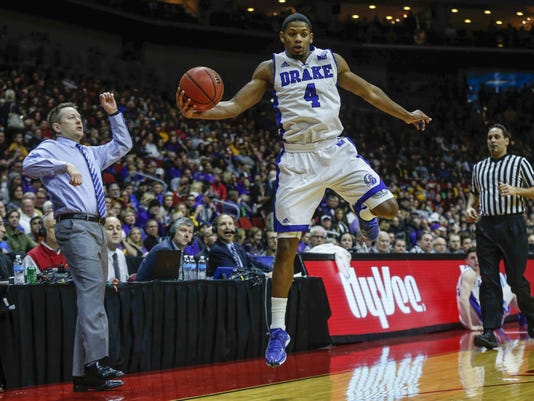 Drake senior guard De'Antae McMurray saves the ball from soaring out of bounds against Iowa as his coach Niko Medved reacts at Wells Fargo Arena on Saturday. The Hawkeyes flustered the Bulldogs all afternoon in a 90-64 win.(Photo: Bryon Houlgrave/The Register)Buy Photo

So why were the Hawkeyes pressing the Bulldogs so relentlessly Saturday? And why did it turn the tide in a 90-64 blowout win in the opening game of the Hy-Vee Classic at Wells Fargo Arena?

“We watched enough film on them to know that they don’t like pressure, and they were kind of timid in the backcourt,” sophomore forward Cordell Pemsl said after his Hawkeyes played their best defensive game of the season.

“They didn’t want to advance the ball at all, because they knew a trap was coming. I think we did a great job of keeping them in that and then throwing them out of rhythm on offense.”

The Hawkeyes (6-6) beat the Bulldogs (5-6) for a sixth consecutive time. This one looked as easy as any of the wins, thanks to 10 Iowa steals and 19 turnovers in all by a veteran Drake team.

The Hawkeyes scored 25 points off of turnovers and reeled off a 13-0 run late in the first half to turn the game in their favor.

It was a reversal of the script that often beset Iowa early in the season, when its turnovers fueled lengthy scoring runs by opponents.

Much of the credit goes to Iowa junior forward Nicholas Baer, who was hyperactive at the top of the press and ended up with five steals. Once the Bulldogs did get past Iowa’s initial defender, they were quickly trapped along the sideline, where the Hawkeyes’ significant height advantage swallowed them up.

“We got them playing a little east-west. This is a team that has really good quickness. They’ve got multiple guys that can put it on the floor and multiple guys that can make 3s.," Iowa coach Fran McCaffery said. "So if you give them the opportunity to have the space that allows them to do that, then they’re going to make 12-15 3s on you.

“We gave up a couple of buckets, but I thought it took their aggressiveness away a little bit, and it enabled us to get our defense back.”

What was so impressive about the Iowa defense was the way it flustered the Bulldogs. Drake was playing a major-conference team for the fourth time this season. The first three resulted in a victory over Wake Forest and losses to Colorado and Minnesota by a combined six points.

The poise the Bulldogs showed in those games was nowhere to be found Saturday.

Graham Woodward is a fifth-year senior starter for Drake. The Hawkeyes hounded him into seven turnovers in only 15 minutes of playing time.

Reed Timmer, Drake’s leading scorer at 20.7 points per game, ended up with 13 against Iowa, but he needed 14 shots to do so.

“Even if he doesn’t have the ball, just stay locked in and stay in my stance,” Iowa guard Isaiah Moss said of his plan against Timmer.

“I think we had a great energy level throughout the whole game.”

Indeed, Iowa did. It was the best overall performance of the season for the Hawkeyes, who were plagued by turnovers during a four-game losing streak. They have now won two in a row. 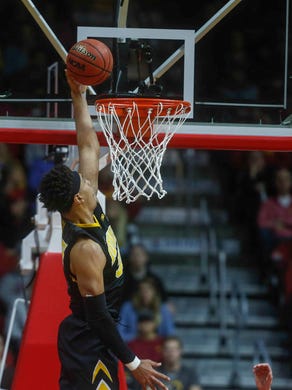 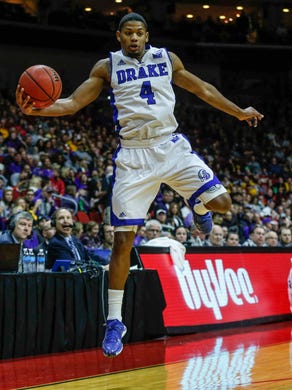 McCaffery said he was surprised by how much he was able to keep the Hawkeyes in a zone defense against a team that often shreds such efforts. The Bulldogs made only nine of 26 3-pointers and were a woeful 3-for-14 after intermission as a seven-point Iowa lead kept ballooning.

“We were going back (from the press) zone and to keep their 3-point shooters in front of us. At least we knew where they were and could contest,” McCaffery said. “And when they did drive it, I thought we moved our feet fairly well. We didn’t foul a ton (14 total). Because that’s what happens to you a lot of times. You start fouling them. And they’re a really good foul-shooting team.”

Drake went only 7-for-9 from the line and didn’t have a significant advantage in any statistical category.

It was an encouraging sign for an Iowa team that had to fight just to get back to .500 on the season.

“I think this game definitely shows us that we have it in us, that we’re are able to not only know what the game plan is but also execute it,” Pemsl said.