The turnovers were terrible, but not fatal. That's a big step forward. 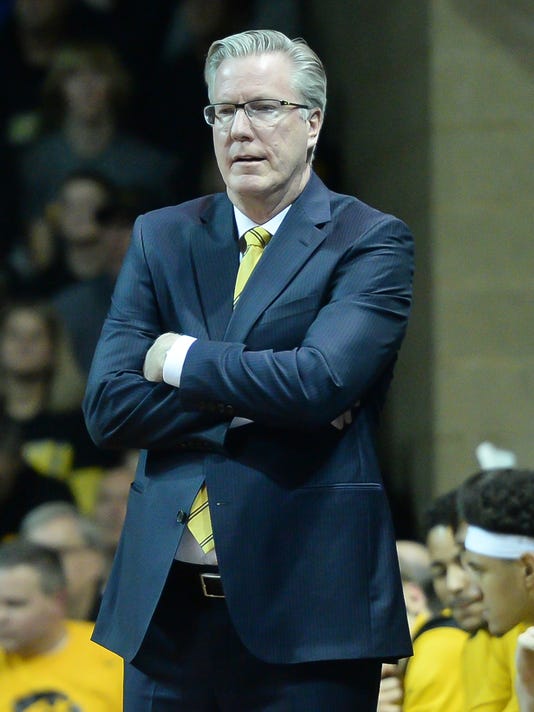 SIOUX FALLS, S.D. — This was the kind of game the Iowa men’s basketball team would have lost two weeks ago.

The Hawkeyes were doing so many things well against Colorado on Friday at the Sanford Pentagon. They were dominant on the glass. The defense was active. The shooting was passable.

Then came a 17-minute stretch that included 14 turnovers. The Buffaloes turned a 10-point deficit into a five-point lead.

At Iowa State on Dec. 7, the Hawkeyes couldn’t overcome their own carelessness. On Friday, they regrouped behind sophomore guard Maishe Dailey and finished off Colorado 80-73.

Iowa coach Fran McCaffery called it an indication his team was growing up. And it’s hard to argue. The 19 turnovers were a stain on Iowa’s effort Friday. But the effort was what ultimately mattered.

“The key to the game was not panicking,” McCaffery said of a moment when the Hawkeyes trailed 51-48 with 11:41 remaining and a pro-Iowa crowd of 3,250 growing restless.

“I said, ‘We can’t play any worse and we’re down (three).’ We’ve got plenty of time. As long as we move the ball, as long as we keep defending and we take care of the ball from that point forward …”

Iowa committed only two turnovers in the final 12 minutes. Dailey hit a jumper, then a 3-pointer to push his team ahead. Tyler Cook scored on back-to-back post moves. Cordell Pemsl showed some inspired play late. Jordan Bohannon was terrific in the second half.

It was a fourth consecutive win for the Hawkeyes (8-6), and the most important of the bunch since it came against a Big Ten Conference-level opponent. The fact that it happened at all should provide a needed jolt to a team that looked fantastic for 23 minutes and foolish for 17.

“We needed that,” Pemsl said after contributing 10 points and a team-high eight rebounds. “We obviously didn’t play our best game but we were able to stay composed late in the game and have that chemistry on the court, and get the bench involved, get the crowd involved and execute down the stretch.” 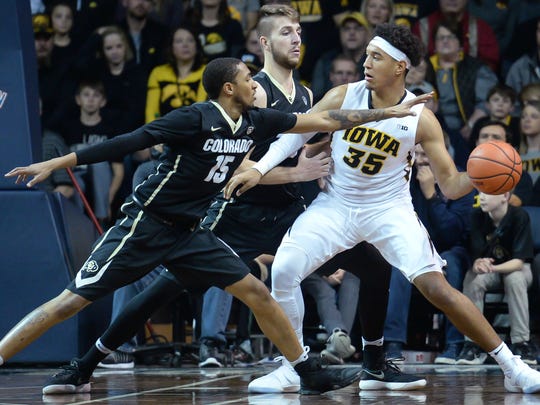 Pemsl feeds off the crowd

The game at the Pentagon sold out in 13 minutes, and it was obviously Hawkeye fans who snapped up the tickets. They probably constituted 95 percent of the crowd in the five-year-old venue.

There were chants of “Let’s Go Hawks” and “I-O-W-A” throughout the game. At one key juncture, the fans even shouted in unison as Hawkeye point guard Jordan Bohannon dribbled up court oblivious to a Colorado defender lurking behind him ready to steal the ball. Alerted to the danger, Bohannon switched hands in time to avert a turnover.

Pemsl, as is usually the case, played to the crowd the best. He admitted that he’s at his most effective when arenas get the loudest.

“I just love getting the crowd into it and I love the crowd knowing than when I’m on the floor I’m going to be giving 100 percent,” Pemsl said. “Whether it’s a big rebound or a big bucket, a block, whatever is going on.”

Pemsl’s biggest moment came midway through the second half with Iowa leading 59-53. He muscled in a layup on one end of the court, and hustled back to outmaneuver a couple of Buffaloes for a rebound at the other. His play was punctuated with some gestures to the appreciative fans.

“I wanted to let them know that we needed them to win this game,” Pemsl said.

Bohannon a force ... on boards?

Bohannon, a 6-foot point guard, had 27 rebounds in Iowa’s first 13 games. But he came into Friday’s contest knowing that he needed to keep Colorado freshman McKinley Wright IV off the glass.

Bohannon responded with a career-high six rebounds, all defensive, and scored 11 of his 14 points in the second half. Wright had 21 points but only two rebounds.

“We knew there was going to be a lot of running rebounders this game, and that was really a key mindset for me was try to get as much boards as possible and box out McKinley Wright. Just eliminating second-chance points as much as possible,” Bohannon said.

Colorado got only seven second-chance points. Iowa built a 43-31 advantage on the glass.

“I led the team in rebounding all three years in high school (at Linn-Mar), so don’t judge me,” he said with a laugh. “If I’m going to start averaging nine, 10 rebounds to win the game, why not?”

The last word, fittingly, is about Dailey. The sophomore had career-highs with 27 minutes and 16 points at precisely the moment the Hawkeyes needed them.

Junior guard Brady Ellingson was hobbled by an ankle injury, playing just 1 minute in the first half and promptly turning the ball over.

Bohannon was called for two fouls in the first 2:16 of the game – “probably the quickest fouls I ever got in my life,” he said – and sat for 11 minutes.

Connor McCaffery replaced Bohannon for much of the first half, but the freshman got winded in doing so and was able to contribute only 2 minutes in the second half.

Iowa had to find a guard who could provide crucial minutes, and Dailey did that and more. He made 5-of-7 shots. He grabbed five rebounds. He manned the top of the press. He committed no turnovers, one of only two Hawkeyes who could say that (Jack Nunge was the other).

Dailey also showed a poised leadership, gathering his teammates together in dead-ball situations for words of instruction as if he were a veteran.

For a player who scored only 27 points all of last year, it’s been a staggering turnaround.

“It’s kind of like Nicholas Baer,” he said, referencing Iowa’s junior forward. “When you see it, it feeds off on you.”

Dailey’s play was infectious Friday. It was just what the Hawkeyes needed.