Down 20 points? No problem for the Hawkeyes, who got a big game from freshman Luka Garza and dug out a gritty road win

The Iowa men's basketball team, which trailed by 20 points after a horrid stretch of play early, regrouped and went on the attack to stun Illinois 104-97 in overtime Thursday at the State Farm Center.

The Hawkeyes did it by reversing everything that had gone wrong early. They started defending the 3-point arc. They stopped committing careless turnovers. They made winning plays down the stretch and dominated the extra session to walk out of a Big Ten Conference arena victorious for the first time this season.

It was only the third time the Hawkeyes had ever rallied from a 20-point deficit to win a game, and the second at Illinois. Iowa trailed Gardner-Webb by 23 points at home in 2012 and 22 here in 1987 before climbing back to steal victories.

But this one may have been the most needed. The Hawkeyes entered play 0-5 in the Big Ten and in danger of falling below .500 overall.

And their smiles reflected pride in a hard-earned victory over an equally desperate foe. Illinois also hadn't won a league game, dropping three of them in overtime.

Iowa coach Fran McCaffery was asked what he told his team at halftime, when it trailed 54-41.

"Nothing that smart, I can tell you that," he quipped. "Just stay the course."

"It was a manageable number at halftime. I think that's important," McCaffery said. "We were down 20 in the first half but we weren't down 20 at half." 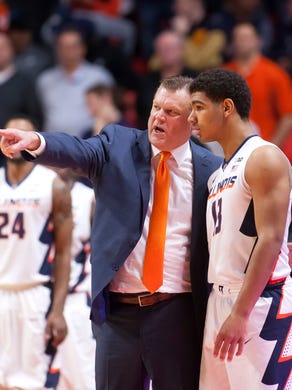 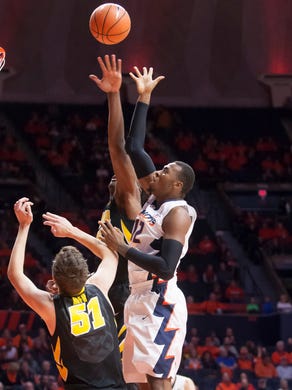 Freshman Luka Garza was the literal and inspirational center for the Hawkeyes, scoring eight consecutive points late in the game to provide the visitors with their first lead since the opening minutes of play.

"We weren't going to lose," Garza said. "We came out right from the jump in the second half. We had more intensity than them. They had been kind of kicking our butt the whole game in terms of that, outhustling us. We weren't going to let it happen any more and it was great to see that out of our team."

Iowa took the lead 83-82 with 3:01 left when Tyler Cook stole a crosscourt pass and fed Jordan Bohannon, who found Garza under the basket. Garza added two free throws and then drove for a short jumper to provide his team with a five-point cushion.

But Illinois battled back to tie the score 90-90 at the regulation buzzer on a Trent Frazier 3-pointer. McCaffery later indicated that he wanted his team to foul on that sequence to make Frazier attempt two free throws instead.

It ended up not mattering. Illinois, which had three players foul out in regulation and another in overtime, wilted under Iowa's pressure in the extra time.

Garza finished with 19 points and 11 rebounds. Bohannon led the Hawkeyes with 29 points including a 3-pointer that gave them a 99-90 lead and essentially sealed the outcome. Cook added 21 points and 13 rebounds.

"We knew that this was a team that we could beat, that we were coming in to a tough environment," Cook said. "I'm just proud of our guys. We gutted it out."

It was a stark turnaround for a team that looked lost in the first half. And it was just in time.

The culprits were familiar. Iowa’s press had no discernible effect on slowing the Illinois three-guard lineup. The Hawkeyes forced only four first-half turnovers while Illinois shot 9 of 15 from the 3-point arc.

Iowa was disjointed in its attack, turning the ball over 11 times while managing a mere four assists in the first half. Illinois turned those turnovers into 16 points.

And then everything that went wrong suddenly went right. Iowa committed only six turnovers in the final 25 minutes. Illinois made just 5 of 15 3-pointers.

The Hawkeyes opened the second half with a 10-0 run and it became a tight affair from then on out.

But, this time, Iowa had the answers it needed late.

Iowa next plays at Rutgers at 6 p.m. Wednesday.