Sophomore may be playing out of position, may not have an NBA future, but “trying to be the best I can be now is most important for my guys."

Iowa’s forward also talks about his aggressive mindset against the Badgers.

Iowa forward Tyler Cook (right) celebrates a basket during the team's 85-67 win over Wisconsin on Tuesday. It was just the Hawkeyes' second Big Ten Conference victory of the season, but Cook has been trying to remain upbeat. The sophomore leads the team in points and rebounds in league play.(Photo: David Scrivner/Iowa City Press-Citizen)Buy Photo

The sophomore forward spent the summer talking about the need to be the player other Hawkeyes rallied around during a season in which they were expecting to be near the top of the league.

He wasn’t expecting the burden to be this heavy or the losses this numerous.

Iowa reached the halfway mark of Big Ten play with a 2-7 record, ahead of only Illinois, heading into Saturday’s 7 p.m. game at surging Nebraska (15-8, 6-4). That game will be televised on BTN.

The Hawkeyes have been outscored by 67 points in Big Ten games, are just 11-11 overall, and are a longshot for any postseason play.

Leistikow: What is Gary Barta risking with the Fran McCaffery extension? His own job — and much more

Iowa's Riley Till celebrates a 3-pointer during the Hawkeyes' game against Wisconsin at Carver-Hawkeye Arena on Tuesday, Jan. 23, 2018. David Scrivner/Iowa City Press-Citizen
Fullscreen

Iowa's Luka Garza fights his way to the basket during the Hawkeyes' game against Wisconsin at Carver-Hawkeye Arena on Tuesday, Jan. 23, 2018. David Scrivner/Iowa City Press-Citizen
Fullscreen

Iowa's Isaiah Moss saves the ball from going out of bounds during the Hawkeyes' game against Wisconsin at Carver-Hawkeye Arena on Tuesday, Jan. 23, 2018. David Scrivner/Iowa City Press-Citizen
Fullscreen 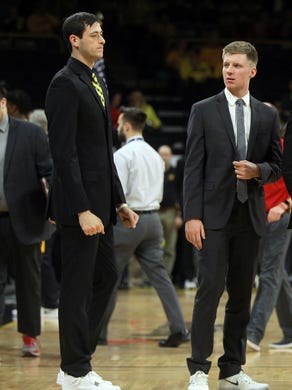 “It’s helped me grow as a man more than a basketball player,” Cook said after an 85-67 victory over Wisconsin on Tuesday.

Cook was brilliant in that one, with 17 points and five rebounds before departing midway through the second half with a mild ankle sprain, (He is expected to play Saturday.) The victory gave the amiable 6-foot-9, 255-pound St. Louis native reason to smile. But he also acknowledged the unexpected strain of a season that has included six blowout losses.

“I never questioned myself or the rest of the guys,” Cook said.

Cook is averaging 16.1 points and 7.2 rebounds in Big Ten play. He is shooting 52 percent from the field. It’s been a strong followup campaign for a player who made the conference’s all-freshman team a year ago.

And it hasn’t been enough to make the Hawkeyes competitive. Cook feels the weight of that.

“Staying consistent within my work, with the way I play the game, the way I think the game, has been the biggest jump I’ve made.”

Iowa coach says the game plan at outset of second half was to feed his sophomore forward.

Iowa coach Fran McCaffery has been impressed with the “professional” attitude Cook brings to his sport.

There has been no shortage of big performances from Cook this year — a career-high 29 points vs. Alabama-Birmingham, 13 rebounds at Illinois, five assists at Iowa State. But he’s had to cede the center spot to star freshman Luka Garza, giving the Hawkeyes their best combination, but not necessarily accentuating Cook’s skill set.

There’s the unselfishness McCaffery spoke about.

“There’s no doubt that he is a very useful college basketball player. I think that in a lot of ways Iowa’s roster is probably not conducive to him reaching his ceiling. You could play him at center full-time. I think he’d be really good going up against some of the bigger, lumbering dudes that populate the Big Ten,” said Sam Vecenie, a national basketball writer for The Athletic website. “He’s mostly a ‘4’ for them, and I think it doesn’t do him any favors as a player.”

Cook has NBA aspirations, but Vecenie doesn’t have him ranked among his top 150 prospects. He said Cook needs to develop a 3-point shot (he’s 3-for-14 in his career) and prove that he can be an elite defensive rebounder first. Cook projects as a center at the pro level, but is caught in a tough era where the supply of players his size far exceeds the demand.

“It would help him I think to be able to move his feet a little better in space. He’s a good athlete, certainly. He’s explosive. He’s a good finisher around the basket, for sure,” Vecenie said of Cook, who has 40 dunks this season. “There are a lot of players Tyler Cook’s size who can do those things who can also bring more to the table. Especially in an NBA where guys who are 6-foot-9, 6-foot-10, 250 pounds, they’re becoming marginalized in a lot of ways.”

Cook is focused on reviving the season at hand.

“Trying to be the best I can be now is most important for my guys,” he said.

But he also feels the lessons he’s learned in what has been a humbling season will pay off whenever he departs Iowa for a pro career.

“I obviously have a lot more work to do, but I think I’ll be ready to make that step whenever the time comes.”

His team may have taken a step backward this season. Cook has not.