Amani Hooker came up big on big stages last year; could he be Iowa's next star in the secondary?

'It's just a play. It's not that big of a deal,' Hawkeye safety Amani Hooker says of his pick-six against Ohio State. Really?

Amani Hooker came up big on big stages last year; could he be Iowa's next star in the secondary? 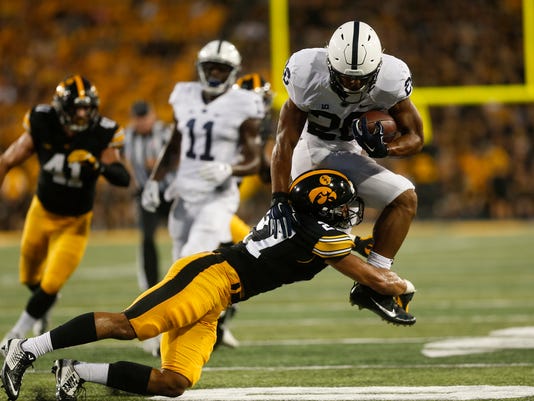 IOWA CITY, Ia. — Amani Hooker’s first start as Iowa’s free safety came against Penn State. He had 13 tackles, including one in which he brought down star tailback Saquon Barkley in space.

Hooker’s final start of his sophomore season came in the Pinstripe Bowl against Boston College. He had 12 tackles, including two in which he chased down receivers from behind to help prevent touchdowns.

Hooker’s finest moment of 2017 came on the very first play of a Nov. 4 home game vs. Ohio State, when he jumped in front of a receiver to surprise quarterback J.T. Barrett, returning his interception 30 yards for a touchdown to kickstart a Hawkeye upset for the ages.

“It’s just a play. It’s not that big of a deal,” Hooker said this week when asked about his Buckeye burst, conceding that he has watched the replay a time or two (or a hundred).

“It’s obviously fun for me. Ohio State was always my big-time school growing up and to get that pick-six was pretty cool.”

Hooker didn’t start Iowa’s first three games last fall. He missed the final three of the regular season with a bruised knee. But what he did in just a half-season as a starter was nothing short of stunning. He had 56 tackles, two interceptions (the other came in the end zone to stifle an Illinois scoring drive), even an 18-yard run on a fake punt.

If you’re looking for star power in Iowa’s secondary in the post-Josh Jackson era, start with Hooker, who is the team’s starting strong safety during spring practices and shows no signs of giving up that spot.

“I’ve got a more wide view of how the program is going into my third year, kind of taking on a leadership role,” said Hooker, a 6-foot, 208-pound native of Minneapolis.

“I’ve seen guys come in and work hard and get to the league like Desmond King and Josh Jackson. … So I know what it takes and I’m just trying to do that same thing.”

That’s a scary thought for opposing offenses. King and Jackson were star cornerbacks at Iowa, but teams could game plan around them by throwing to the other side of the field if they wished (although they were slow to do so last year against Jackson, to their ultimate peril).

But a playmaking strong safety? That’s a different challenge altogether.

Take that interception against Ohio State, for example. Hooker was unaccounted for on that play.

“The guy I was covering disappeared, so I become a free player, and then from then on just read the quarterback,” Hooker said.

“Coming up to the game, my nerves were kind of running. But then once I did that it kind of calmed the whole game down for me.”

Hooker was a special-teams ace as a freshman, recording four tackles. That figured to be his role again last season, until starting free safety Brandon Snyder suffered a knee injury that kept him out of all but one game. Jake Gervase was the early choice to replace Snyder, but midway through the third game defensive coordinator Phil Parker was ready for a switch.

Enter Hooker. He seized his chance. Eventually, Gervase returned to the lineup, and Hooker moved over to strong safety in place of Miles Taylor.

Now, he’s lining up alongside Gervase as the starting safety duo. Snyder is back with the team helping out his onetime understudies, but is rehabbing a second knee surgery. He is expected to return to practicing this summer.

That has set up an interesting dilemma for Parker and the defensive coaching staff, who are trying to groom three new starting linebackers. Can one of their experienced safeties be moved to the outside linebacker spot, where elite pass-coverage skills are required?

“I don’t really mind that. If they do, they do it. I’m just going to play my role and play the best I can,” Hooker said of the possibility.

“I could play the run good and I can cover in space. It’s whatever the coaches think.”

Hooker is already the backup outside linebacker in nickel packages. He would need to put on a little weight in order to make a full-time transition.

He also hasn’t given up his special-teams duties, a role he enjoys. He’s on the punt team again.

Hooker’s goal is to make himself as valuable as possible. That will translate to playing time. And then, perhaps, the NFL. It’s what he learned from watching King and Jackson the past two years.

“As long as you practice hard, it transitions to the game,” Hooker said.

“I’ve always been thinking about playing time since I first got here. That’s the whole goal for a lot of guys is come in and play. Last spring, I was just trying to get better and learn the playbook more. And now it’s still improving the playbook and improving my fundamentals.”

The aim is “just playing faster mentally and physically, seeing stuff before it happens,” Hooker said.

That’s what he did against Ohio State.

He’s still seeing that play. It runs on a loop in the Iowa football facility.