Levi and Landan Paulsen are 'mirror image' twins from Moville who have followed the same path as Hawkeyes; could that include starting as seniors?

Iowa guard Landan Paulsen is competing against twin brother Levi, among others, for starting spots. But he doesn't really view it as competition. Hawk Central

Levi and Landan Paulsen are “mirror image” twins who have been inseparable since their birth 22 years ago in Moville.

They came to Iowa to play football together. They grew their hair long, sported bushy beards, majored in enterprise leadership, spent their off hours in the outdoors and became legends of a sort despite rarely seeing the field. It was impossible not to notice the free-spirited Paulsens.

They are fifth-year seniors now. The long hair is gone. The drive to compete is not.

One characteristic of mirror image twins is that Levi favors his right hand and Landan his left. And that means they’re not necessarily facing off for the same guard spot on the Hawkeye roster. Levi is only comfortable on the right side of the line and is listed as the starting guard on that side of the ball; Landan started at left guard in Iowa’s final spring practice.

Mirror image starting guards for the Hawkeyes this fall? It is possible, although Cole Banwart will certainly have a say in how things shake out.

“I’m pushing myself every day to be the best Iowa offensive lineman I can be,” Landan Paulsen said Saturday after helping lead a skills clinic for children in Johnston. “Hopefully, I’m really close (to being a starter). If I keep grinding and I keep developing my leadership role, maybe I’ll start a few games this year, but we’ll see.” 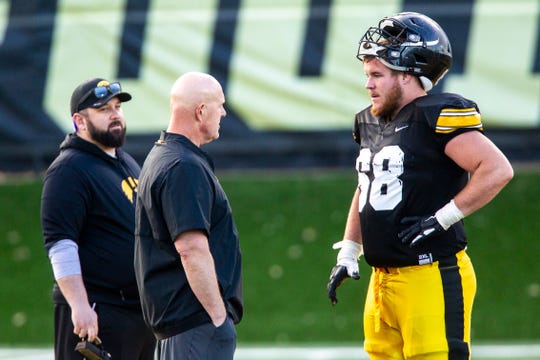 Landan has yet to start a game at Iowa. Levi has started three. There aren’t many differences between the two, but that’s one.

The Iowa roster lists both Paulsens at 6-foot-5, 305 pounds. But Landan confided that he’s actually five pounds heavier than Levi, while Levi is a half-inch taller.

Levi has more of a “country” side to him, enjoying rodeos. Landan likes to pick up a guitar now and then, the only thing he does right-handed.

The Paulsens and their unruly hair quickly became part of the Iowa football lore. By last fall, though, they were ready to cut it — for the right price. The University of Iowa Dance Marathon, a fundraiser for cancer research, offered that chance. The Paulsens went under the scissors up on the stage at that event, raising nearly $17,000 for the cause. They won’t be growing it back out anytime soon, Landan said.

“Now our mom misses it and … it doesn’t bother us,” he said.

Both Paulsens are thrilled that they’ve enjoyed essentially the same path at Iowa. They consider themselves best friends, and have been working together since starting a snow-blowing business in the fourth grade back in Moville. They were up to 14 customers by the time they graduated, getting up at 4 a.m. to scoop out local driveways before heading to school.

They later worked on a 300-head cattle ranch. They started a custom baling business that saw them produce 2,000-3,000 on a good weekend.

Landan Paulsen, who is the better student of the two (Levi is smart but struggles in the test-taking department), thinks they’ll start another business together after this final year of college.

It will probably have something to do with the outdoors. That’s another shared passion for the Paulsen twins. They’re planning a walleye fishing excursion to Trout River after school lets out. Defensive lineman Levi Duwa will join them for the 13-hour drive.

“He’s my best friend and I’m his best friend,” Landan said of his twin. “It’s fun to play football alongside your brother and do the same things and hang out with the same guys as him.

“We get sick of each other sometimes. But we can’t hold a grudge.”