The power forward left after leading the Hawkeyes in scoring and rebounding as a junior; he will embark on a pro career as a free agent

The Iowa forward talks about dunks.

Tyler Cook's professional basketball career will begin with him as a free agent.

The power forward, who left Iowa after his junior season, was not selected in Thursday's NBA Draft.

That will extend the Hawkeyes' draft drought to five years, since Aaron White went in 2015.

Cook averaged 14.5 points and 7.6 rebounds last year, leading the Hawkeyes in both categories. He had flirted with the NBA Draft process after his sophomore season before making a late decision to remain a Hawkeye. Iowa reached the second round of the NCAA Tournament this spring. 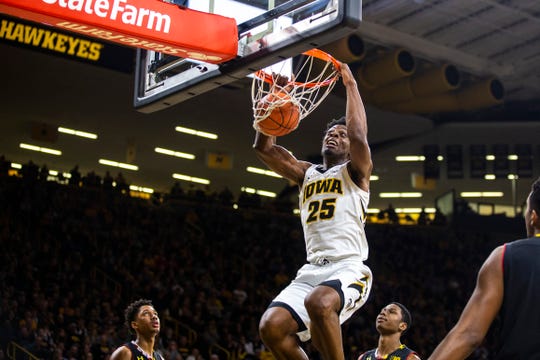 Cook is a native of St. Louis who became an instant starter after arriving at Iowa in 2016, flashing a wide smile that endeared him with fans and an occasional piercing glare aimed at opponents that endeared him even more. The prodigious dunker averaged 12.3 points as a freshman and 15.3 as a sophomore. He was difficult for opponents to handle in the low post, shooting 54.2 percent from the field for his career.

But Cook never showed the ability to shoot from the outside and struggled at the free-throw line, making only 63.9 percent of his 507 career attempts. He also saw his turnover numbers increase each year, including 92 of them as a junior.

He will likely find a home with an NBA team in the summer league, giving him a chance to make an impression. After that, he could sign with a team in the NBA G League or go overseas to play. It's the same path that recent Hawkeye stars Jarrod Uthoff and Peter Jok have made.