Geno Stone, Matt Hankins ready to take on Iowa's opponents and naysayers, too

Both are juniors who have proven they can play. But both are also fueled by those who doubt them.

Geno Stone, Matt Hankins ready to take on Iowa's opponents and naysayers, too

Iowa safety Geno Stone doesn't care if you call him an athlete. He just wants to be seen as a football player. Hear him explain: Hawk Central

IOWA CITY, Ia. — Geno Stone and Matt Hankins are roommates and leaders of the Iowa secondary this summer.

They are junior starters who were both forced into games two seasons ago and discovered that they could indeed make plays against Big Ten Conference competition.

They have something else in common, too: an internal drive to prove their detractors wrong.

For Stone, it’s the comments he finds on social media suggesting he isn’t big enough or fast enough to be an elite safety.

“I’m still trying to prove myself every day,” said Stone, who stands 5-foot-10, 210 pounds and was good enough last season to be an honorable mention all-Big Ten pick.

He told reporters Tuesday that he scrolls through his Twitter feed and finds the negative comments. 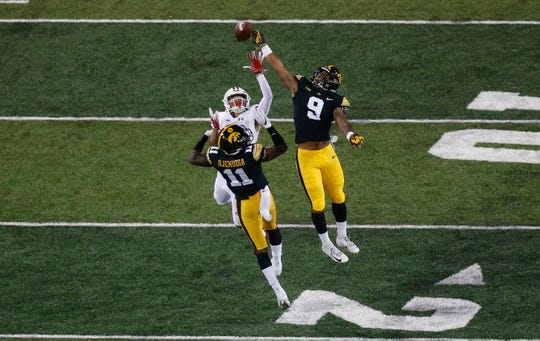 Iowa safety Geno Stone (9) knocked this pass away from a Wisconsin receiver last season. Stone took over a starting spot after that game and is now preparing to be a leader in the secondary as a Hawkeye junior. (Photo: Bryon Houlgrave/The Register)

“I don’t really try to pay attention to them, but all these things about me not being athletic, as big as other people, or me not having height or body size or whatever it is... I guess I’ve got to prove to these doubters every day. It’s nothing new. I’ve been doing it my whole life,” Stone said.

For Hankins, it’s the ribbing he still endures for not yet recording an interception at the collegiate level. To be fair, the cornerback mainly hears this from his teammates. But still…

Hankins, Stone and senior cornerback Michael Ojemudia are leading the film sessions that take place Mondays through Thursdays in the defensive backs' room. That is the trust defensive coordinator Phil Parker has placed in them.

They also are sharing a house with junior wide receivers Brandon Smith and Ihmir Smith-Marsette, an interesting dynamic in which every meal can turn into a competition or an argument. For example, Hankins said Stone and Smith-Marsette recently had a lengthy debate about whether Buffalo Wild Wings should be classified as a fast-food restaurant. Smith-Marsette, who is a bit of an expert on speediness, argued it should. Stone dissented. The back-and-forth went on for 90 minutes and included phone calls to two of the chain's restaurants. The managers of those stores claimed the fast-food label.

Hankins still is not convinced. He sided with Stone. The defensive guys stick together.

“Every day, it will get scrappy,” Hankins said of competing in drills against his wide receiver roommates. “But we know that’s the game. That’s on the field. Once the practice is over with, we come back to the locker room and everyone’s cool.”

Stone, a lightly recruited but hard-hitting athlete out of Pennsylvania, had 39 tackles last year, taking over a starting safety spot after four games when his mentor Amani Hooker was moved to a hybrid linebacker position. Hooker has since moved on to the NFL. Stone knows he'll need to thrive in Hooker’s wake.

Stone intercepted four passes last year. His goal this year is to get at least six.

Hankins, still looking for his first, envies the way Stone is always around the football. He wants to be that way, as well. But he also spent time learning the safety and “cash” positions in Iowa’s defense this spring. He feels like he can handle any of them. That added versatility will serve him well. 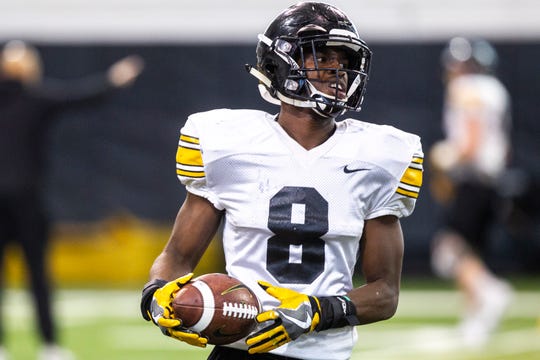 And the 6-foot, 185-pound Texas native also feels better-equipped to handle the punishing style of play of the Big Ten. He didn’t arrive at Iowa with a reputation for being a physical tackler, Hankins admitted.

He’s had to learn that, sometimes painfully. He broke a wrist while breaking up a pass against Wisconsin last season. That cost him five games. Hankins returned, reclaimed his starting cornerback spot and finished with a remarkable 48 tackles, second on the team on a per-game basis.

“They don’t expect corners to be that aggressive, especially on run schemes. So if I get a chance to come in, I’m going to come in.”

And if he gets a chance to pick off a pass or two, you can bet Hankins will be ready for that, too.