They shared a kicking coach in Dan Orner. They also shared a goal to be a Purdue Boilermaker.

Dellinger got that chance. Duncan, after years of attending Purdue camps, got a late walk-on offer from Iowa instead and jumped at it.

So it was understandable that Duncan flashed a sly smile Saturday afternoon in Kinnick Stadium, where he made all six of his kicks and was a chief reason the No. 22 Hawkeyes snapped a two-game losing streak.

Iowa emerged a 26-20 winner over the Boilermakers (2-5, 1-3 Big Ten Conference). Fourteen of the points came from Duncan, who leads the nation with 17 field goals. 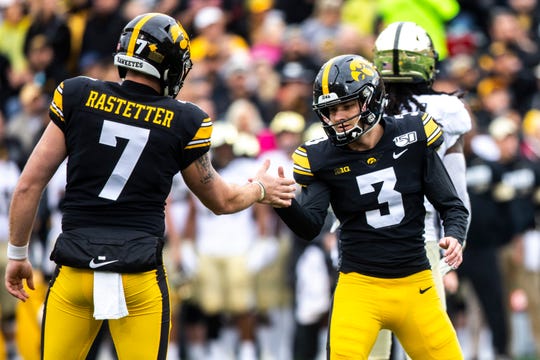 “Every win is special to me,” Duncan said. “But, yeah, it is awesome to go out there and compete against them, especially against J.D.”

Duncan was good from 30, 38, 42 and 44 yards Saturday. He has missed only two field-goal attempts all season.

He is still not on scholarship. He is still committed to being a Hawkeye for life.

“Iowa feels like home. I don’t picture myself anywhere else. I plan on staying here. I love this place. The people are great,” Duncan said. “What I think is awesome is everyone sees (the) Iowa Hawkeyes as their professional team. I could never imagine that (growing up).”

Iowa (5-2, 2-2) may be viewed by some as a professional outfit, but its offense had been displaying little sign of earning that designation recently. Duncan’s field goal was all the scoring the Hawkeyes mustered in a 10-3 loss at Michigan two weeks ago. He booted two more last week, then saw the offense get one fourth-quarter touchdown, in a 17-12 home loss to Penn State.

So it was understandable that Duncan was the last person the sellout crowd of 69,250 wanted to see Saturday.

But there he was, three times in the first half, trotting onto the field to provide some points after the offense stalled out again. Iowa led 9-7 at halftime and left the field to a chorus of boos. 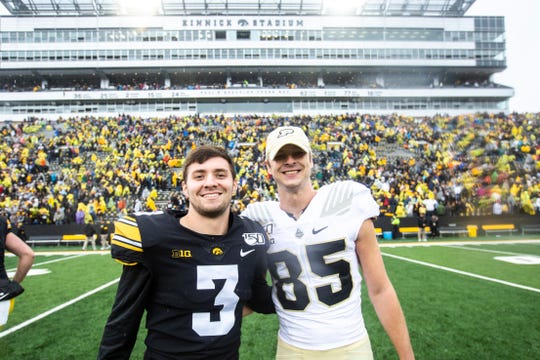 “Of course, we’d rather kick extra points,” he said. “But it’s fun to go get some field goals out there. It’s a great job by our offense getting us in that position.”

At halftime, Iowa adjusted its blocking schemes and also decided not to be so reliant on trying to run the football.

On the first drive of the second half, quarterback Nate Stanley passed six consecutive times to drive his Hawkeyes 71 yards to Purdue’s 1-yard line. Finally, freshman running back Tyler Goodson high-jumped into the end zone.

The Hawkeyes had their coveted touchdown.

Duncan was called on for one more field goal. Mekhi Sargent ran one in from 14 yards out to finish the scoring.

Iowa offensive tackle Tristan Wirfs didn't know there is a meme of him awkwardly hugging Keith Duncan after a kick Saturday. Hear his reaction: Hawk Central

“Getting back in the end zone, celebrating with your teammates, kind of like brings everybody up, lifts spirits,” Wirfs said. “I think guys crave that feeling.”

But when Iowa can’t get there, it’s comforting to know that the fun-loving Duncan has been seriously on-target all season. Duncan and holder Colten Rastetter play a game of “rock, paper, scissors” after each kick, moments that have gone viral. They ended up tied in their six chances Saturday, Duncan was dismayed to report.

There was another scene caught on camera that quickly swept the Internet on Saturday. The 5-foot-10, 180-pound Duncan gave a quick, awkward hug to Wirfs (6-5, 322) after one successful kick.

Wirfs was told after the game that he was part of a meme.

Duncan was Iowa’s starting kicker in 2016, but lost that job to Miguel Recinos the next two seasons. He had every reason to walk off of the Hawkeye roster at that point, but did not.

“He almost kind of surrendered a couple years ago, and not in a negative way, but he was kind of like, you know, when he wasn't playing he kind of leveled off there for a little bit,” Ferentz said. “But the credit goes to him.”

Michael Ojemudia, a senior cornerback, said players treat Duncan as one of their own, even though kickers sometimes are thought to reside in their own little corner of the football facility, kept separate from the “real” athletes.

“Kickers are kind of like defensive backs or quarterbacks, where everybody is looking at you,” Ojemudia said.

“We bring them in. Maybe other teams don’t. But they do the same workouts, the same summer conditioning as us. So they earn the same right to be on the field as us.”

Duncan noted with pride that he once hit a game-winning kick when his Weddington (N.C.) High School was playing Dellinger’s Charlotte County Day. He finds a way to bring that up whenever the two friends speak.

But he said he didn’t know he was the nation’s most prolific college kicker this season until a reporter pointed it out to him.

“I just go out there and try to execute very single rep that I’m getting,” Duncan said. “My job isn’t really kind of to keep stats. I’m just focused on making the kick and have a one-rep mindset.”

Duncan got six reps Saturday. He split the uprights. He got bragging rights.

It was a kicker’s dream day.

Iowa plays at Northwestern next Saturday.