What channel is Iowa football vs. Minnesota? How to watch, stream and listen to the Floyd of Rosedale game 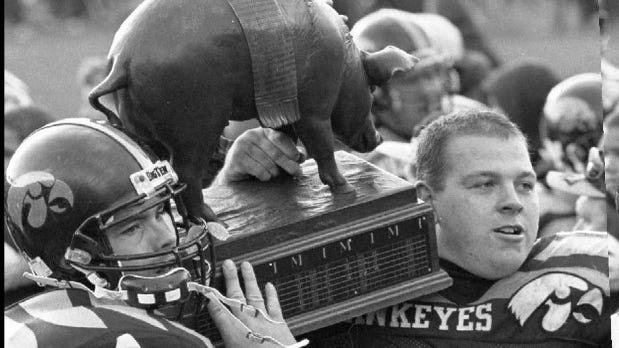 Time to battle for a pig.

Iowa and Minnesota meet for the 105th time on Saturday, Nov. 13, for a chance to hoist the Floyd of Rosedale trophy. The game will be televised on the Big Ten Network and fans can also stream the action on the FOX Sports app.

The Hawkeyes (7-2, 4-2 in the Big Ten) survived a late comeback from Northwestern to bounce back after a rough two-game losing streak. Iowa quarterback Alex Padilla is slated to make the first start in his career on Saturday.

Meanwhile, the Gophers (6-3, 4-2 in the Big Ten) saw their four-game winning streak fall on Saturday, as Minnesota lost 14-6 at home to Illinois. Gopher quarterback Tanner Morgan threw for 180 yards, no touchdowns and a pair of interceptions. Ky Thomas led the ground game with 60 yards.

More:Yes, Iowa football and Minnesota play for a pig. Here's what to know about Floyd of Rosedale history

Here is everything Hawkeye fans need to know about watching, streaming and listening to Iowa football's game against Minnesota.

How to watch and stream Iowa football vs. Minnesota

Where: Kinnick Stadium in Iowa City

Iowa football is a 5.5-point favorite over Minnesota, according to Tipico Sportsbook. The over/under for the game is 37.5 points.

When the Hawkeyes and Gophers square off Saturday, Iowa will trot out a new starting quarterback.

Alex Padilla will make his first career start just one week removed from filling in for starter Spencer Petras against Northwestern. Padilla seemed to spark the Iowa offense in a defensive slugfest, completing 18 of his 28 passes for 172 yards. He did not commit a turnover.

Iowa's depth chart listed redshirt freshman Deuce Hogan was listed as the No. 2 quarterback for the Minnesota game. Petras was not included.

A brief history on Iowa-Minnesota

What was once a lopsided rivalry in the early 1900s, the battle for the Floyd of Rosedale has favored Iowa as of late. The Hawkeyes have won the last six meetings, including a 35-7 victory in 2020.

Minnesota holds a 62-50-2 all-time series lead over Iowa, though. After losing their first two games to the Gophers after Kirk Ferentz took over as head coach, the Hawkeyes have won 16 of the past 20 meetings.

Adam Hensley is a digital producer with the USA Today Network. You can follow him on Twitter @A_Hens83 or reach him at ahensley@gannett.com.