Dau Jok is proud of his younger brother's growth as a player, as a person.

Iowa's Peter Jok was making his PTL debut this summer on Thursday night after missing Week 1 with a foot injury. He scored 16 points, 14 coming in the second half, on 5-of-12 shooting.(Photo: David Scrivner, Iowa City Press-Citizen)Buy Photo

NORTH LIBERTY, Ia. — There was a going-away party for Dau Jok in Des Moines on Thursday, the eve of his departure for 20 weeks of Army training.

Instead, he was in the North Liberty Community Center playing a seemingly meaningless summer-league game. It was no disrespect to Dau. Rather, it was a sign of how seriously he takes his responsibility as the only true senior on the Hawkeyes' basketball roster.

“I’m a leader now. They’re going to follow whatever I do,” Peter says of the younger Hawkeyes — 10 freshmen and sophomores — who are now watching his every move. “I had to be here.”

“He knows I love him,” Peter says. “He knows I wish I could be there.”

Dau, who couldn’t be a more impressive resource for his younger brother, understands.

“This thing called leadership,” Dau says, “it’s all about caring for the next guy more than yourself.” 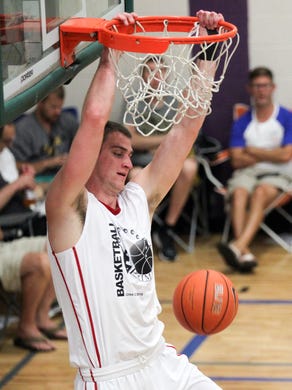 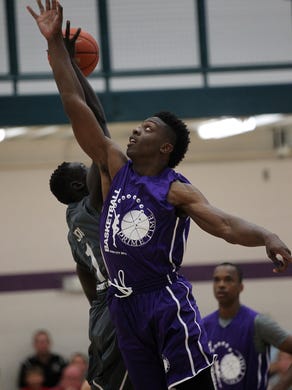 Dau knows all about selflessness. He essentially has been more of a father figure than brother to Peter since their childhood, when their father Dut, a military commander in war-torn Sudan, was murdered.

The brothers, as you probably know by now, fled to Des Moines, where they’ve embraced the opportunity America offers. Dau went on to play Division I basketball, get an Ivy-League degree and become an activist for the Sudanese people with the Dut Jok Youth Foundation.

Now he’s off to sacrifice for something greater than himself, a characteristic he sees growing within Peter.

While stationed in Fort Benning, Ga., in January, Dau stayed up to catch Iowa’s ESPN-televised, 76-59 victory at then-No. 4 Michigan State, even though he had to be up at 3:30 the next morning. Peter scored 23 points in that game, 19 coming in Iowa's dominant first half.

But what Dau was most proud about that night was what Peter said in a TV interview, as he deflected credit to his teammates.

Peter has watched Dau exhibit leadership his entire life. But being in command hasn't been Peter's role, until now. Even as a senior at Valley High School in West Des Moines, he acknowledges, he led other seniors on the team take the lead.

But after a rocky first few years at Iowa — an OWI arrest, limited playing time, battles with conditioning and asthma as he continued to get right after high-school knee surgery — he’s changed.

Dau sees it. Others do, too.

Rick Brown, my former Register colleague, stood with me at the Prime Time League on Thursday night as Peter scored 16 points and grabbed nine rebounds.

He observed how much he’s seen Peter grow from a sheepish high school player to the confident person he is now in front of a microphone.

Peter has improved his work ethic, his diet. He's taken leadership cues from former Iowa guard Anthony Clemmons — and Dau, of course. Now comes the real test: being a role model and leader for a dozen other impressionable Hawkeyes who now look up to him.

What's he telling them?

“Know your role. Try to perfect your role,” Peter says. “I don’t want to go through the first month not knowing what kind of team we are. Just work on what you do best.”

Peter has been working out so hard — three times a day — in advance of his final college season that he realized he might have been overdoing it. He's had nagging injuries to his thumb, foot and shoulder. He recently took five days off from basketball to recharge.

He’s learning how to do things right, day by day.

Peter doesn’t know when he’ll see his brother again. Maybe at the Big Four Classic in Des Moines in December.

In the meantime, he’s leading through dedication and hard work with hopes of leading Iowa to a fourth consecutive NCAA Tournament and himself to a first-round NBA draft board.

“You’ve got to show by example,” Peter says. “Playing hard, in practice, PTL, wherever I’m at.”

He no longer needs the reminders.

Like the interview after Michigan State showed Dau, he’s got this.

“I tell him, 'With all the stuff you’ve been through in your life, just play free, man,'” Dau says. “So this is nothing new. He’s been under pressure his whole life. (In Sudan), we didn't know if we'd be alive tomorrow.

No doubt, Peter’s going to be the man for Iowa basketball this season.

In the process, he’s become one.