Six times in the FBS last week, a double-digit favorite lost outright. Iowa has its own history in this department. 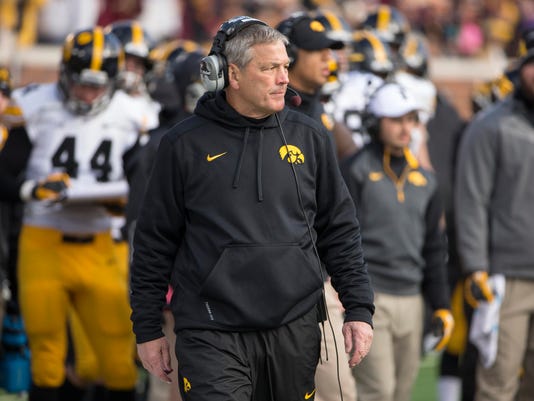 Kirk Ferentz's Hawkeyes have a history of losing about once per year (on average) as a double-digit favorite. However, under C.J. Beathard, the Hawkeyes haven't lost in the regular season, period. Beathard is 15-0 as a starter in regular-season games.(Photo: USA TODAY Sports file photo)

Why so much positive press about Iowa’s Saturday opponent, North Dakota State?

After all, they say, even though this is the nation’s premier FCS program … it’s still an FCS program.

They also say that while the five-game Bison winning streak over FBS foes is impressive, they’ve never faced a team as good as 11th-ranked Iowa before.

Lastly, they mention that 2-0 Iowa’s a big favorite — the spread was 16.5 points as of Thursday — against 2-0 North Dakota State.

To dismiss the possibility of the five-time defending national champions beating the Hawkeyes in Saturday's 11 a.m. game at Kinnick Stadium (ESPN2) would be to turn a blind eye to history.

On average, it happens once per season to Iowa.

Losing as a double-digit favorite happened six times just last week in the FBS, including to Northwestern, Oklahoma State and TCU.

Throw in that ESPN's FPI analytics say that this North Dakota State team would be favored on a neutral site against 46 FBS opponents, and add the fact that the Hawkeyes are coming down off a rivalry win with the Big Ten Conference opener next Saturday, and it's a tricky spot.

So, how to avoid a double-digit-curse disaster Saturday?

Here are some common themes in Iowa's aforementioned 10 losses:

Too many turnovers. An obvious one. But carelessness is the easiest way to lose one you shouldn’t.

That was the big factor in losing at home to Northwestern in 2006 as a 20.5-point favorite; and in the forgettable season-ender in 2007 against Western Michigan as a 14-point favorite.

Poor special-teams play. Mike Meyer missed two first-half field goals in a 22-21 loss at Minnesota in 2011, when Iowa entered as a 14.5-point favorite. In 2012, a botched onside-kick recovery was the last Iowa mistake that helped 14.5-point underdog Central Michigan pull a 32-31 stunner.

A lack of fire. After losing as a 19-point favorite at Indiana in 2006 despite gaining 467 yards and winning the turnover battle, Ferentz said, “You can never take the field not prepared to give your best.”

And after a lethargic 2010 loss at Minnesota after entering as a 14.5-point favorite, then-quarterback Ricky Stanzi confessed, “We're not all working together as a team.”

Key injuries. You don’t want to think about this one, but it’s part of football.

(OK, before we move on, please forgive me for digging up old Hawkeye wounds.)

The Hawkeyes will face the North Dakota State Bison on Saturday. Here are three things to watch during the game.

This year’s team has yet to commit a turnover — a credit to quarterback C.J. Beathard.

Ferentz has seemingly become more aggressive — helping avoid the playing-not-to-lose pratfall — since the lessons of 2014.

And most importantly, the culture has improved — a comfort that the message of North Dakota State’s prowess has been successfully delivered from coaches to players.

Added defensive tackle Nathan Bazata: “They kind of remind you of Wisconsin or Michigan State.”

But I don’t think it’ll be easy. Neither does middle linebacker Josey Jewell.

“They’re a good team. They’re all smart,” Jewell said. “It’ll be a tough one this week.”