Maybe Iowa's coaches don't have a read on this team, either. 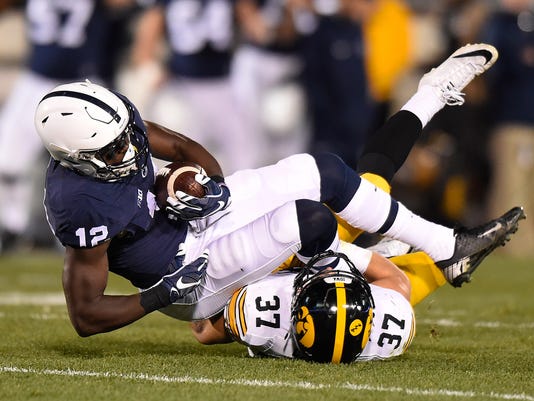 UNIVERSITY PARK, Pa. — It’s been difficult for those of us on the outside of the Iowa football program to get a read on this team.

After watching a lopsided 41-14 loss to No. 23 Penn State before 106,194 fans at Beaver Stadium, it’s clear the Hawkeye coaching staff doesn’t have one, either.

“It’s very disappointing. Not what we expected,” a humbled coach Kirk Ferentz said afterward. “We all came in and thought this would be a tough, competitive ballgame.”

Iowa was beaten by a more talented team Saturday night, for sure, and that’s what made the approach to this game so confounding.

The Hawkeyes needed to be bold in this one.

Instead, they were predictable and conservative. (Stop me if you’ve heard that before.)

Penn State's Saquon Barkley (26) does a flip at the end of a run after being hit by Iowa during the first half of an NCAA college football game in State College, Pa., Saturday, Nov. 5, 2016. (AP Photo/Chris Knight) Chris Knight, AP
Fullscreen 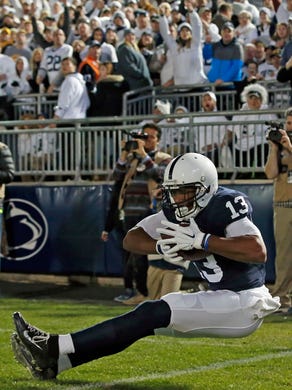 Penn State's Saeed Blacknall (13) makes a catch in the end zone for a touchdown against Iowa during the first half of an NCAA college football game in State College, Pa., Saturday, Nov. 5, 2016. (AP Photo/Chris Knight) Chris Knight, AP
Fullscreen 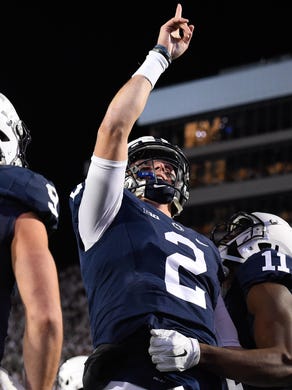 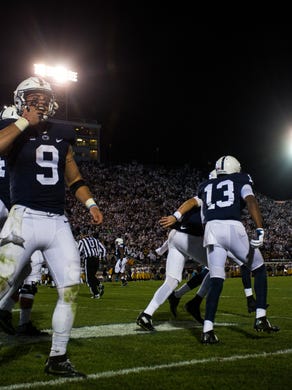 How many times have you seen Iowa players scurry to the line of scrimmage on fourth-and-1 and try to rush a quarterback sneak? Well, if you’ve seen it and know it’s coming, you can bet Penn State knows it, too.

And the Nittany Lions did. They stuffed C.J. Beathard’s sneak attempt on Iowa’s first drive of the game for a 1-yard loss to force a turnover on downs.

“They knew it was coming,” Beathard said later.

The spark in the offense you were hoping for after a bye week?

There were a couple of very small adjustments. Akrum Wadley running a jet sweep out of the slot, Adrian Falconer getting more playing time at receiver.

But it was the same old, bland Hawkeye offense that had registered just 153 yards midway through the fourth quarter and ended up with 234 for the game. That’s the fourth time Iowa’s been held under 300 yards, each resulting in a loss.

Still, Iowa had a chance to make a statement early in this game. It chose not to.

Hawkeyes get thumped in the night at Penn State

Down 7-0, the Hawkeyes were in advantageous third-and-short situations on the two drives following Beathard’s failed sneak.

Third-and-1? LeShun Daniels, slammed down for nothing.

On both runs, Penn State seemed to know exactly what was coming. You probably did, too.

Iowa coaches are either too stubborn to try something else, or they don’t realize this offensive line hasn’t been able to push any credible defense around in the trenches all season.

And in both cases, Ferentz followed by making the conservative, play-not-to-lose decision (punting) instead of trying for a fourth-and-1 conversion.

Granted, one was from the 50-yard line and the other was from Iowa’s 38; probably not green-light situations during Thursday’s analytics meeting. But to pull an upset on the road as a touchdown underdog with the season going in reverse, you’ve got to be willing to take chances.

Instead, Penn State jumped ahead 21-0 after just a quarter and a half.

Play-not-to-lose Iowa was already getting routed.

The disparity and first-half helplessness reminded me of the 2015 TaxSlayer Bowl against Tennessee. The Nittany Lions racked up 348 yards in the first two quarters and led 24-7 at the break, but it could’ve been much worse.

It was obvious Saturday that Iowa doesn’t have the horses to hang with the Big Ten’s better teams.

And that’s bad news entering next Saturday’s 7 p.m. home game against No. 2 Michigan, which crushed this Penn State team 49-10.

The Hawkeyes, now 5-4 overall and tied with Northwestern for fourth in the Big Ten West at 3-3, don’t have much of a chance against the Wolverines, especially if they take the same approach as they did here.

Not once in the first three quarters Saturday did Beathard attempt a deep pass.

There was plenty wrong with Iowa’s defense, too. And that’s another issue. A different column for another time.

But this was a Penn State team that came into Saturday’s game ranked 10th in the Big Ten in scoring defense. There were yards to be gained and chances to be taken.

And Iowa chose to play conservatively.

On second thought, maybe it’s not so hard to get a handle on this team, after all.