The new Hawkeye offensive coordinator started with one word. "Opportunity." 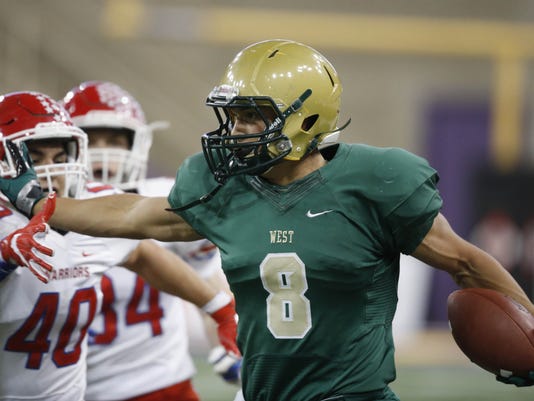 It was a fitting charge after a newsy Monday.

Whether or not you believe the naming of Brian Ferentz as offensive coordinator will upgrade the Hawkeyes’ passing game, there’s no denying they’ve got something new to sell.

At 33, Ferentz is closer in years to potential recruits than he is his father and Iowa’s 18th-year head coach, 61. With a few Big Ten hires pending, he becomes the conference’s second-youngest offensive coordinator after succeeding Greg Davis, 65, who retired last week.

The majority of Hawkeye faithful seem excited about Ferentz. Though his last name is familiar, they view him as a fresh face for an offense that needs freshening.

The next three weeks, leading up to National Signing Day, provide a major opportunity for Iowa football to cash in on that excitement.

Leistikow: Hawkeyes' offense has a chance at change under Brian Ferentz Brian Ferentz, 33, was named to succeed Greg Davis as offensive coordinator for the Iowa Hawkeyes football team on Monday.

As of Tuesday morning, Iowa had 14 verbal commitments in its Class of 2017; 15 if you count grayshirt defensive back Noah Clayberg of Pella (which you should).

That leaves roughly five to seven scholarships to fill by Feb. 1. And at the top of the to-do list is attracting playmakers at wide receiver, particularly with two Class of 2017 de-commitments from Texas at that position.

That’s why my first question Monday for the new offensive coordinator was this: How do you get prospects excited about this passing offense going forward?

“I'd say they have a tremendous opportunity,” Ferentz deadpanned. “I'd start there.”

It’s no secret Iowa couldn’t get pass-catchers open in 2016, particularly after the injuries to top receiver Matt VandeBerg and top tight end George Kittle. Its passing average per game was the program’s lowest in 35 seasons.

Brian Ferentz’s new role — and the common knowledge that the state’s top Class of 2017 prospect in Oliver Martin (Iowa City West) is not only a wide receiver but undecided on his college — provides a chance to revisit the classic chicken-egg argument.

Is it a lack of playmakers that limits Iowa’s passing game?

Or is it the lack of a passing game that limits Iowa’s ability to attract playmakers?

The Register's Chad Leistikow and Mark Emmert give their thoughts after Brian Ferentz was promoted to offensive coordinator for the Hawkeyes.

Brian Ferentz is smart enough to know he’s been put in a position to address both sides of the argument.

He’s already got the offensive line (five starters from the Joe Moore Award-winning unit return) and running game (with Akrum Wadley’s return) in a good place.

And, by all indications, the program’s new No. 1 quarterback should be a good one in Nathan Stanley.

Just think where Ferentz could drive the offense with his newly acquired keys if Iowa could pull in a Martin-type prospect every year.

He talked Monday about striking a run-pass balance — much like the Hawkeyes found in the 2015 season despite an injured quarterback — to avoid predictability.

Here was how he continued his answer about selling Iowa to receiver prospects.

“But as far as getting guys excited to play, I think you sell them on opportunity and what we intend to do moving forward.”

So, if you’re into the silly season of college football, buckle up.

The next three weeks, in particular, could be filled with new stories — and more coaching vacancies. Iowa still has an opening, just in a different seat, with Davis' departure. And it wouldn’t be a shock if one or two more assistants are gone soon.

Add the probable NCAA approval of a 10th full-time coaching position for football, and it is possible Kirk Ferentz will soon be tasked at making as many as four new hires.

“I've been considering everything, and I'll continue to do so,” the head coach said Monday in a non-answer to a question about whether there would be more staff changes coming, and added: “My responsibility is to make sure that we get everybody in the right seats.”

The Iowa coach named his son offensive coordinator on Monday.

Wednesday, the prolonged “dead period” for recruiting ends. Thursday, coaches hit the trail for the final push to fill the Class of 2017.

For the past month, Kirk Ferentz has been subtly optimistic about his program scoring recruiting successes down the stretch. He reiterated that Monday.

“What happens in January really helps shape and mold the recruiting class,” Kirk Ferentz said, “and I think we are off to a good start.”

And with a forward-thinking tone established with Brian Ferentz’s promotion, I like Iowa’s chances at a good finish.

*Neither Minnesota nor Purdue, who recently hired head coaches, have named an offensive coordinator.