Bohannon nailed eight 3-pointers and Cook had a double-double in the road win for the Hawkeyes.

COLLEGE PARK, Md. — Jordan Bohannon collected a loose ball, took one dribble and stepped into a 3-pointer from the top of the key.

The freshman turned around and gave a subtle fist pump, having silenced the Xfinity Center crowd yet again with his sixth 3 of the game and pushing Iowa to a nine-point lead.

It was indicative of the confidence and fearlessness he and the young Hawkeyes showed in an impressive, much-needed 83-69 victory against No. 24 Maryland on Saturday night.

Senior Peter Jok warned his freshmen teammates that the Terps' home court can get rowdy and loud, as it was when the Terrapins took down Iowa here last year. Maryland has one of the best home environments in the Big Ten Conference with an active, close-to-the-floor student section.

But, as Jok said, "We didn’t give the crowd a chance to get into it."

Iowa's lone senior had 11 points while Jordan Bohannon and Tyler Cook combined for 45.

Iowa had been searching for a signature road win all season. The Hawkeyes fell short in double-overtime losses at Nebraska and Minnesota, the latter being especially frustrating as it came with officiating controversy at the end of regulation.

But they left no doubt in this one, with a precision 3-point performance from start to finish. They nailed a remarkable 16 3-pointers on 26 attempts for 61.5 percent.

Those numbers are amazing for two reasons.

One, Iowa entered Saturday having shot an abysmal 24 percent — 16 of 66 — in its last three games.

Two, the Hawkeyes struggled here last year with a 5-for-24 performance from long range, which led to Iowa players commenting on the uncomfortable feel of Maryland’s Under Armour-brand basketballs.

The Iowa freshman was superb in an 83-69 road win at Maryland.

Jok said Under Armour's ball had a different (better) feel than last year. But there was a better explanation for Iowa's sizzling shooting Saturday.

This team, despite taking some tough losses along the way, is brimming with it right now.

“We were confident throughout the game. We just kept playing hard," sophomore forward Ahmad Wagner said. "At no point did we say this game’s over.”

I've said for a while now to anyone that will listen: I thought this Iowa team would steal one on the road one of these nights.

Time was running out on that prediction, but Saturday's win certainly was timely for the Hawkeyes.

Frankly, it was their most complete performance of the season. 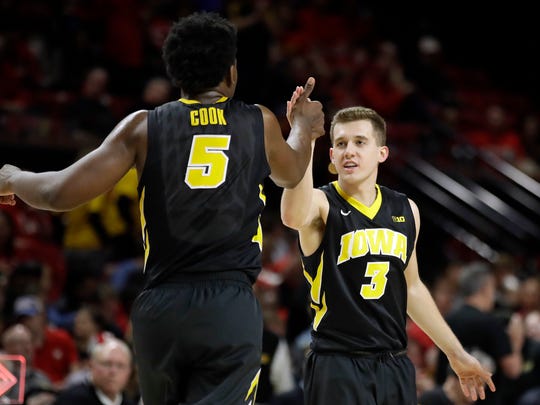 “For sure," Jok said. "As a team, we were as connected on defense and offense as we have been all year.”

It showed maturity, following the game plan of not letting Maryland's guards, especially Melo Trimble, crack Iowa's zone defense. Trimble had 20 points in Maryland's 84-76 win in Iowa City on Jan. 19, but was held to 10 on 4-for-13 shooting Saturday.

And Iowa showed relentlessness, even after building a 47-40 halftime lead. Forward Nicholas Baer punctuated that after missing a 3-pointer from the right corner with just over 5 minutes left. He hustled to follow his shot, grabbed the rebound and beat Maryland defenders to the basket for a 77-56 Iowa lead.

Bohannon dropped in eight 3-pointers — four in each half and one shy of Chris Kingsbury’s school-record nine — to end up with a career-high 24 points and five assists.

Either he or Cook could be getting a notification Monday that he’s been named Big Ten Freshman of the Week. Cook, the 6-foot-9 forward, was on his game Saturday. He recorded his first career double-double: 21 points, 10 rebounds.

“I felt like I was all over the place today," said Cook, who had 14 points and five rebounds in Tuesday's overtime win against Indiana. "I felt great. My energy was good. I was running, rebounding and stuff.”

With the win, Iowa moved to 16-13 overall and 8-8 in Big Ten Conference play with two regular-season games to go — Thursday at Wisconsin, Sunday at home against Penn State. The Hawkeyes, alone in eighth place, should be safe from a first-day game at the Big Ten Tournament when they come back to the D.C. area in a few weeks.

One young team that played here is fading down the stretch; the Terrapins (22-7, 10-6), who like Iowa start three freshmen, have lost five of their last seven.

The other young team here showed it might be surging.

Even if Iowa runs out of time to make the NCAA Tournament field, a win like this is a big boost toward its chances of making the NIT.

And right now, it seems like the more games these freshmen and sophomores play, the better they get.

"We haven’t given up on this season at all," Wagner said. "We know what we’re capable of.”