Iowa City West manhandled Muscatine, but it seemed clear to me that Joe Wieskamp has all the tools to be a college star. 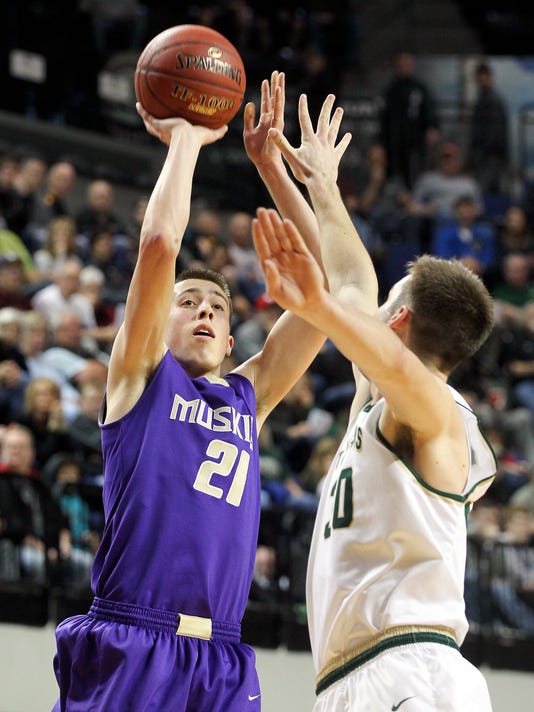 Muscatine's Joe Wieskamp shoots over West High's Connor McCaffery during their game at the U.S. Cellular Center in Cedar Rapids on Tuesday. Both are committed to play at Iowa in college.(Photo: David Scrivner, Iowa City Press-Citizen)Buy Photo

CEDAR RAPIDS, Ia. — If you follow Iowa basketball closely (like I do) and were inside the U.S. Cellular Center on Tuesday night to see future Hawkeyes Connor McCaffery, Patrick McCaffery and Joe Wieskamp play for the first time in person (like I was), here are some things you might have concluded.

No. 1, you would say that the Iowa City West team that features Connor (a 6-foot-5 senior who is committed to play for his father and next year’s Hawkeyes) and Patrick (a 6-7 sophomore unofficially committed) is really, really good. The Trojans throttled Wieskamp-led Muscatine, 83-44, in a Class 4A substate final to head to their seventh straight state tournament.

And No. 3, you would say that the future of Iowa basketball is trending up. Maybe way up.

That’s something that all three players discuss when they frequently attend Iowa games at Carver-Hawkeye Arena.

“It’s exciting to think how good we’re going to be,” Patrick says, “once we get there.”

My biggest takeaway from Tuesday night and background interviews: Wieskamp is going to be really special as a Hawkeye.

I know. That’s a bold statement about somebody who has another year of high school left and whose team just lost a game by 39 points.

But he passed the eye test, and then some. Though Wieskamp said that Iowa coach Fran McCaffery has told him to watch current Hawkeye star Peter Jok, the Big Ten’s leading scorer, my thoughts sprung to Jarrod Uthoff.

The Muscatine junior scored 28 points in a loss to Iowa City West.

Remember when Uthoff was in his most dominant form a year ago as a Hawkeye senior and was in the conversation for national player of the year? That’s what Wieskamp looked like at the high school level Tuesday.

He was posting up in traffic and scoring against double teams. He dunked within the half-court offense. He coolly swished 3-pointers. He blocked shots. He glided up and down the court and tried to get teammates involved.

“He’s so long,” Connor McCaffery says. “You think you’re there, and you’re not. He’s pretty quick, too. ... When he gets in the lane, it’s hard to stop him, because he’ll just shoot over you.”

Wieskamp scored 28 points Tuesday on 12-for-22 shooting. He can see himself someday being like Jok, currently the Big Ten’s leading scorer.

“Just the way he’s able to knock down shots,” says Wieskamp, who hit 42 percent of his 3-point attempts this season while averaging an astonishing 30.5 points and 10.4 rebounds a game as a point guard. “I think I can take it to the rim a little harder than he has this season. I’m not saying I’m a better player than him, by any means.”

Iowa sees Wieskamp as a 2 or 3 guard in college.

Wieskamp also is a high-character individual, just like Uthoff was here.

“Can’t be any better,” Muscatine coach Gary Belger says. “He’s what you look for in a kid. He’s the real deal. … Politeness, disposition, how he carries himself on and off the floor.”

Wieskamp is rated the No. 43 overall prospect in the Class of 2018 by Rivals.com and No. 45 ESPN.com. If those numbers hold, he would be the highest-rated recruit in the Fran McCaffery era.

But there was more than Wieskamp to like Tuesday. 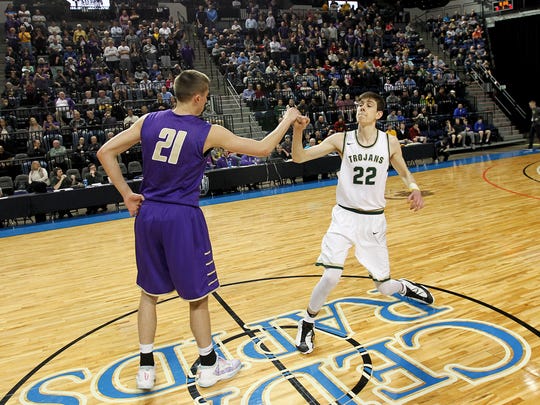 Muscatine's Joe Wieskamp, left, and West High's Patrick McCaffery, both Iowa commits, wish each other luck prior to their game at the U.S. Cellular Center in Cedar Rapids on Tuesday. (Photo: David Scrivner, iowa City Press-Citizen)

Though both younger McCafferys are also highly rated by recruiting services — Connor is No. 90 on the ESPN 100 in the Class of 2017 and Patrick is Rivals.com’s No. 60 overall player in the Class of 2019 — it’s easy to take them for granted. If their dad wasn’t Iowa’s coach, they’d be getting a full-court, national recruiting press.

But these guys are Hawkeyes through and through. And they have different kinds of game.

When Connor was a freshman, his numbers weren’t great. But Bergman couldn’t keep him off the floor. And that team won a state championship.

In Tuesday’s rout, Connor produced a quiet 19 points, right at his season average, and created open shots for his teammates (including Devontae Lane, who had 21 points) while also impressively scoring through contact in the lane and hitting eight of nine free throws. He also defended Wieskamp in the first half and held him to 4-for-10 shooting, which I’d count as a success.

“He’s a coach on the floor,” Bergman says. “He knows what the other team is going to do. He watches film constantly. He understands the game really, really well and always has. I’ll always ask him what he thinks when I’m looking at a decision maybe between doing this and this. ... Luckily, we agree most of the time.”

As for Patrick, there’s meteoric upside. He’s skinny and needs to get stronger; but don’t forget, his body was battling (and overcoming) cancer just a few years ago.

On Tuesday, even though he finished with nine points (below his season average of 14.6), his potential was apparent. He dunked, made a 3-pointer, ran the floor, dished for open layups, rebounded.

“He’s doing a lot of things from the perimeter; getting to the lane and scoring, a lot of pull-up jump shots,” Bergman says. “I think with strength, he’ll be able to go post somebody up like Connor is now — and he’s going to be 6-8 or 6-9 doing it. As he improves, he’s going to be a tough matchup for people.”

Patrick seems like the exact type of player his father recruits — long, athletic and with the ability to score inside and out.

These three guys are going to come one by one, one year at a time. All are rated with four stars by Rivals — no small achievement. Tyler Cook was Iowa’s lone four-star guy in last year’s five-player freshman class. Big man Luka Garza, in the Class of 2017, is also an ESPN 100 guy with a four-star rating.

Wieskamp says he’s “extremely solid” with his commitment to the Hawkeyes and wants fans to know he's "going to be a hard worker, and give it everything I have" at Iowa.

Combine that influx with the optimism coming from a strong freshman class (including Cook and Jordan Bohannon) on the current 16-13 Hawkeyes, and it's pretty safe to say that the coming years of Iowa basketball are justifiably brimming with anticipation.