Leistikow: Stage is set for Thomas Gilman to back up NCAA title talk

The 125-pounder is looking to dominate his bracket and become the Hawkeyes' first unbeaten national champ in 7 years.

Leistikow: Stage is set for Thomas Gilman to back up NCAA title talk

Over the next three days, the stage is set for him to walk the walk ... to the top of the 125-pound podium.

Here at the NCAA Wrestling Championships, the unbeaten Hawkeye's stated goal is to record five pins in five matches.

“Is that realistic?” he says, asking a question to himself because he knows that sounds rather bold to someone listening to it – then goes ahead and answers it. “Of course it is.”

With Iowa’s chances at a team championship at the Scottrade Center viewed as a long shot, Gilman could be left carrying the Hawkeyes' banner as he seeks to become the program’s first individual champion in three years.

And if Gilman has his way, his five-match title run won’t look anything like the last one from an Iowa podium-topper, Tony Ramos in 2014.

Ramos sweated out five decisions in a tough 133-pound bracket in Oklahoma City, two coming in extra time, by scores of 3-1, 6-4, 3-1, 5-1 and 3-1 to be immortalized in the Dan Gable Wrestling Room as a national champion.

“That was good for him, and he was happy, and everyone was happy for him. But I’m not sure how happy he should have been with the way he won his national title,” Gilman says, as only he can. “A lot of close matches that whole year from him. And not taking anything away from Tony Ramos, but I want to go out there and win a national title, and I want to do it in dominant fashion.”

The Iowa 125-pounder is trying to become the program's first unbeaten national champion since 2010.

Maybe that’s Gilman taking a dig at Ramos (who left the Hawkeye Wrestling Club last spring after he felt “stabbed in the back” by Iowa’s coaches). Maybe that’s just him being honest.

Perhaps a little of both.

“You guys ask the questions,” Gilman says. “I just answer them.”

The combination of Gilman’s aggression in interviews and in forcing on-mat action have made him a fan favorite.

But now he knows he must finish the deal to officially become a Hawkeye legend.

Here in 2015 as a sixth-seeded redshirt sophomore in his first NCAAs, Gilman roared into the semifinals after an upset, sudden-victory win over Virginia Tech’s Joey Dance (who is back as this year’s No. 2 seed). But then on the Friday-night stage, he got pinned in a 52-second flurry by unseeded Zeke Moisey of West Virginia.

“To this day, I don’t really know what happened,” Gilman says. “It was kind of a freak thing.”

In 2016, he pinned top-seeded Nathan Tomasello of Ohio State on the way to the finals, where he lost, 6-3, to Penn State’s Nico Megaludis, without getting a takedown.

“Last year in the finals, I wrestled hard. I wrestled really hard,” Gilman says. “But he was the better man that day.”

Is the third time a charm?

Gilman’s got everything going for him on the mat this year.

He’s 27-0, with 23 of his wins coming by major decision or better, and arrives in St. Louis as the unquestioned man to beat at 125 pounds. 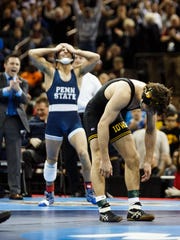 His closest bout of the year was a 3-2 win over Penn State’s third-seeded Nick Suriano, who on Wednesday was ruled out of the tournament because of an injury.

The title seems to be there for the taking for Gilman.

“I always want the best to compete against me,” Gilman said during Wednesday’s pre-tournament press conference upon learning the Suriano news. “The way the bracket laid out … he would have had to make it to the finals. No disrespect to him or anyone else, I just wrestle whoever they put out there.”

If Gilman wins five matches without a loss, he’ll become Iowa’s first undefeated national champion since Jay Borschel in 2010 and just the second of the coach Tom Brands era (11 years).

Chris Cuellar and Chad Leistikow are live from St. Louis all week.

Even Brent Metcalf, who went 108-3 when he made three consecutive finals from 2008 to 2010, lost one bout in each of those seasons.

Gilman realizes history is at hand – and in his hands.

Though Brands would never say this, Gilman’s title could be very important for a program that takes an individual-first, team-second approach.

Gilman is Iowa’s best chance at a title this year, and with both unbeaten No. 1 seeds coming back next year at the weights occupied by junior Brandon Sorensen and freshman Michael Kemerer (not to mention prized recruit Spencer Lee needing recovery from a torn ACL), the Hawkeyes could be facing uphill individual climbs in 2018, too.

“He’s a veteran. His approach is right. His mindset is right,” Brand says. “I’m optimistic, because he’s Thomas Gilman.”