Leistikow: Iowa, Barta need to learn the lessons from this $6.5M case

The University of Iowa limited the public damage in Friday's news, and now must take steps to affect change going forward.

Leistikow: Iowa, Barta need to learn the lessons from this $6.5M case

The University of Iowa agreed to pay Tracey Griesbaum $1.5 million Friday to end a legal battle that began nearly three years ago with the firing of the former field hockey coach.

The University of Iowa is officially on the hook to Tracey Griesbaum, Jane Meyer and their talented lawyers for $6.5 million.

The legal settlement was a Friday afternoon news dump that — at this point — is the best possible news for involved parties.

First and foremost, this is a victory for Griesbaum and Meyer.

The couple fought their terminations from UI — former field hockey coach Griesbaum’s in 2014, former No. 2 athletics administrator Meyer’s (after a re-assignment) in 2016 — with the same determination they brought to their jobs at Iowa.

They accused the university — namely, athletics director Gary Barta — of gender and same-sex discrimination, and were successful in convincing an eight-person jury it exists. On May 4, five women and three men unanimously ruled Meyer’s way in a high-profile civil lawsuit.

The couple can carry on with their lives having a sense of accomplishment and justice.

They are receiving a financial boost far exceeding Meyer’s previous $176,000-plus annual salary at Iowa and the $200,000 without-cause buyout Griesbaum received after she was fired on Aug. 4, 2014. But beyond that, they have drawn attention to what Des Moines attorneys Thomas Newkirk and Jill Zwagerman contended was a culture within the Hawkeye athletics department that was unfair toward gay women.

Meyer had said after the Polk County jury ruled for $1.43 million in her favor — a figure that was bumped to $2.3 million in Friday’s announcement — that her suing Iowa was “about trying to make that university better.” 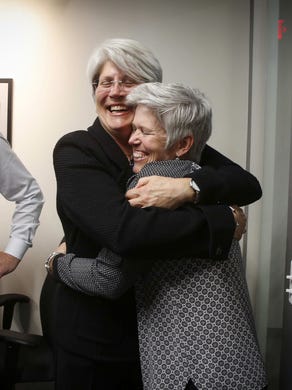 Former University of Iowa senior associate athletic director Jane Meyer, left, gets a hug after giving a press conference on Thursday, May 4, 2017. A Polk County jury awarded Meyer a victory in her sexual discrimination lawsuit against the University of Iowa to the tune of $1.43 million. Bryon Houlgrave/The Register
Fullscreen

Former University of Iowa senior associate athletic director Jane Meyer gets a hug from her mother, Thelma, after giving a press conference on Thursday, May 4, 2017. A Polk County jury awarded Meyer a victory in her sexual discrimination lawsuit against the University of Iowa to the tune of $1.43 million. Bryon Houlgrave/The Register
Fullscreen

Former University of Iowa senior associate athletic director Jane Meyer, right, gets a hug from her mother, Thelma, after giving a press conference on Thursday, May 4, 2017. A Polk County jury awarded Meyer a victory in her sexual discrimination lawsuit against the University of Iowa to the tune of $1.43 million. Bryon Houlgrave/The Register
Fullscreen

She and Griesbaum (who was allocated $1.5 million in the settlement) won’t be working in Hawkeye athletics again, but they can take comfort in knowing that they’ve done their best to impact change — not only at Iowa, but perhaps nationally.

Meyer attorneys hailed this case as a landmark ruling, with Newkirk adding discrimination is “happening to hundreds of women around the country.” The nation’s athletic administrators should have taken notice of Iowa this month.

This isn’t a win for Hawkeye athletics. But it’s not a fatal blow, either.

Let’s start with the financial impact. The settlement is big, no doubt. Even inside a Power Five athletics department, $6.5 million isn’t lying around in briefcases.

The university announced that the settlement would be paid out from athletics. It's good that taxpayers aren't being asked to pay for this. That figure, though, is a fraction of the department’s $110 million annual budget. Iowa was projected to receive roughly $35 million in media rights alone in the 2016-17 budget year.

The former field hockey coach at Iowa reacts to her partner, Jane Meyer, winning a civil lawsuit against the UI.

The business of sports will go on. Football players will report in early June, and Kirk Ferentz will be chewing through a pack of sugar-free Bubble Yum on Sept. 2 as the Hawkeyes host Wyoming at Kinnick Stadium.

What about public perception? Immediately, the settlement erases a month or more of potentially unflattering headlines. Had the Griesbaum wrongful-termination lawsuit gone to trial as scheduled June 5, Barta’s name (and Iowa's) would have been dragged through a few more weeks of testimony.

Attention would have been focused on whether Barta was acting without bias in firing Griesbaum — who remains the most recent coach to deliver any Iowa women’s team a Big Ten Conference title, in 2008 — after receiving complaints of mistreatment from some athletes and their parents.

And what about Barta? Well, perhaps Friday's announcement saves his job.

The 11th-year athletics director, despite the civil ruling earlier this month, still has a lot of support within his department. Defense testimony emphasized that Meyer’s December 2014 reassignment from athletics was like “a cloud was lifted” from within the walls of their Carver-Hawkeye Arena offices.

But if everyone handles it the right way, this settlement could be to Barta what the 2015 TaxSlayer Bowl was to Hawkeye football. That ugly loss required the program and its coaches to realize something was broken and that a culture change was necessary.

Going forward, perhaps Barta will be given a chance to lead again following this stinging defeat — a chance to lead necessary culture change. Keep in mind, it was Barta who gave the statement in the school's response Friday afternoon. 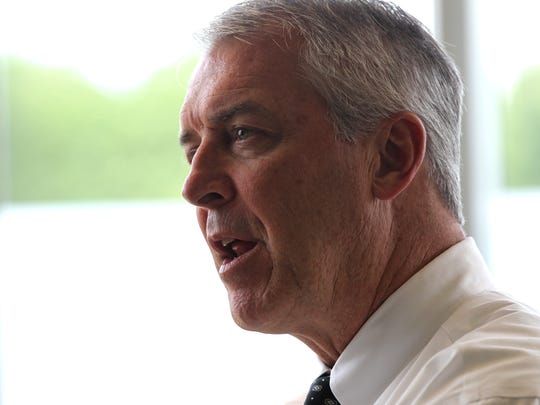 The day after the Meyer verdict, UI President Bruce Harreld announced that an independent firm would conduct an external review into university employment practices, as defined by the Iowa Civil Rights Act. The Feds are also investigating how the athletic department handled gender bias claims.

Assuming the review finds practices that need fixed — and it should, considering the two-plus weeks of evidence that was traded in downtown Des Moines a few weeks ago, not to mention the ruling — Barta and the university would do well to take serious inventory of the findings.

In a UI-supplied statement Friday, Barta sounded like someone who was going to still be around in a few months. "I am very proud of our department’s commitment to our student-athletes and that our outlook remains strong," he said. "We are confident the best is yet to come.”

Another few winners in Friday’s ruling: Iowa basketball coach Fran McCaffery and strength coach Chris Doyle. They were on the witness list in the Griesbaum trial, with her attorneys planning to paint them as skating through the Iowa system unscathed despite intense coaching practices while Griesbaum was punished for hers. 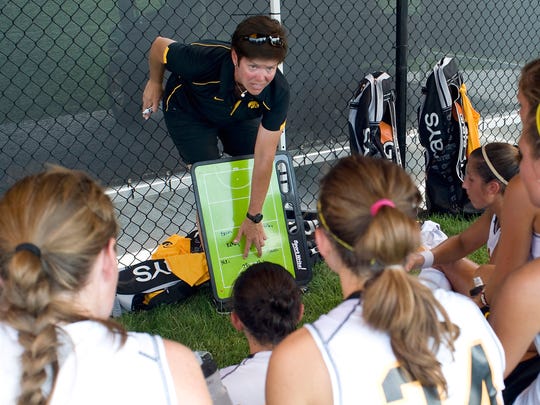 All of that ugly back-and-forth is now moving into the past.

Friday’s settlement involves a dollar sign followed by a lot of zeroes.

Perhaps that’s a good price to pay so that all can move forward from this chapter.