Leistikow: Few wanted them. At Iowa, they helped turn a program around.

Appreciation for under-recruited castoffs such as Josey Jewell and Akrum Wadley who deserve a loud cheer in their Iowa football home finales.

Leistikow: Few wanted them. At Iowa, they helped turn a program around.

Sports columnist Chad Leistikow talks with Danny Lawhon as they look ahead at the Iowa Hawkeyes' match up against the Purdue Boilermakers.

Akrum Wadley chose Iowa over Temple, and it's become a history-making decision. The running back from Newark, New Jersey, has been one of the program's most prolific scorers and big-play threats.(Photo: Brian Powers, The Register)Buy Photo

IOWA CITY, Ia. — As new Hawkeyes, they joined a football team fresh off a 4-8 season.

Many came as two-star recruits or walk-ons. If it weren’t for Iowa, many wouldn’t have had a Power Five home.

They certainly weren’t viewed as saviors for a reeling program that had reached one of the low points of the 19-year Kirk Ferentz era.

Yet here they are, five years later, nearing a surprising and triumphant finish line. Saturday’s 2:30 p.m. game against Purdue will be their last experience as a rostered Hawkeye in Kinnick Stadium.

They accomplished more than most believed they could.

“That’s kind of what Iowa’s all about,” undersized defensive tackle Nathan Bazata says. “You get people that other guys don’t want, and you make them into something. It’s pretty cool.”

Ike Boettger and Boone Myers won’t play on Senior Day vs. Purdue but have remained active team members while hurt.

Eighteen seniors will be honored in a pregame ceremony Saturday; 15 are fifth-year seniors who were here from the beginning in the Class of 2013. Seven came here as walk-ons.

Each has his own story of perseverance and deserves the loudest cheer you can muster Saturday at Kinnick.

On Tuesday, Ferentz also took time to praise two walk-ons for life — Daniel Gaffey of Iowa City, Jake Hulett of Springville — who haven’t seen (and won’t see) a meaningful down at Iowa but made valuable deposits into the scout team and program culture.

“Those guys have been in the program, worked every bit as hard as everybody else,” Ferentz said Tuesday, “and they do a great job day in and day out.”

This class of undervalued castoffs became something special.

Here are six guys that nobody wanted who not only made it, but will leave a lasting mark on Hawkeye football. 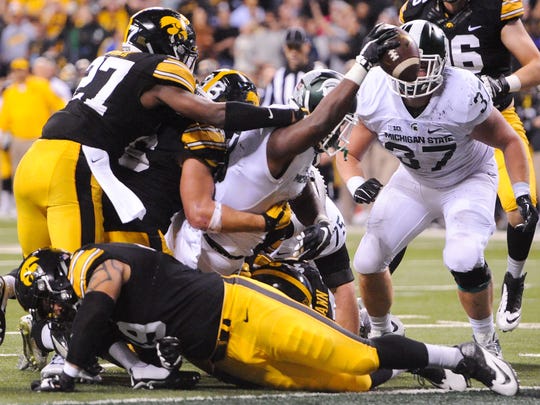 The only interest this 8-man player from tiny Howells, Neb., had out of high school was from South Dakota State, where his older brother played. But he was a vintage find by Iowa assistant Reese Morgan, resulting in his only scholarship offer.

Five years later, Bazata is prepared to make his 35th career start along Iowa’s defensive line. Coaches praise him as a technically sound player who fulfills his assignments and makes others around him better.

Is there anything more Iowa than that? Bazata was one of several first-time starters on Iowa’s 2015 defense that came together after the disappointment of 7-6 the previous year. Those Hawkeyes led in the Big Ten Conference championship game against Michigan State until L.J. Scott’s 1-yard touchdown run with 27 seconds left in Indianapolis.

“We wanted to play to the best of our ability, just stick together and do everything as a team,” Bazata said. “It just kind of went from there.”

The story of Iowa’s star middle linebacker is well-told, but here’s the one-sentence recap. Before he became a college football star, he was going to play for hometown Luther College in Decorah until the Hawkeyes — on Morgan's recommendation — came through with a scholarship offer.

On Wednesday, Jewell was named one of five finalists for the Bronko Nagurski Award, given to the nation's top defensive player. He will go down as one of the top Hawkeye defenders of all time.

“The one fact I can give you that to me says it all: He will be our first three-time captain, and we've never had that,” Ferentz says. “It's not like he campaigned for it. That was Josey being Josey.”

“I wasn’t that good out of high school,” Jewell cracks of his rise from two-star status. “It’s all about what you do here and how you take coaching. It’s been an amazing ride since then.”

Fifth-year senior lineman Boone Myers hasn’t played since Sept. 30 after surgery on his right ankle. Myers played a limited role until the injury became too crippling.

These guys are forever linked. Myers (of Webster City) and Bower (of West Branch) faced the same decision: accept a full-ride scholarship from FCS Northern Iowa, or walk on at Iowa?

Myers told his father, Eric, he would rather be a backup for five years as a Hawkeye than play under scholarship somewhere else. Bower felt the same way.

"I’ve never looked back," Bower says. "It’s the best decision I’ve ever made."

On the same day just after fall camp in their second years, Ferentz extended Myers and Bower full-ride scholarships.

Bower became the underappreciated poster child of perseverance. He started at outside linebacker in 2014, lost his job to Cole Fisher in 2015 and has been Iowa's weak-side linebacker the past two seasons. He's the 73rd Hawkeye to top 200 career tackles and will make his 37th start Saturday.

Myers became the starting left tackle on Iowa’s Big Ten West title team and last fall was an anchor on the Joe Moore Award-winning offensive line. Even now with his senior year cut short by right-ankle surgery, he's remained positive and hopeful he can return for a 26th career start in the bowl game.

“I’m cherishing all of it,” Myers says. “Even being on the sidelines, being up in the press box, watching those guys go out there and play, it’s fun.” 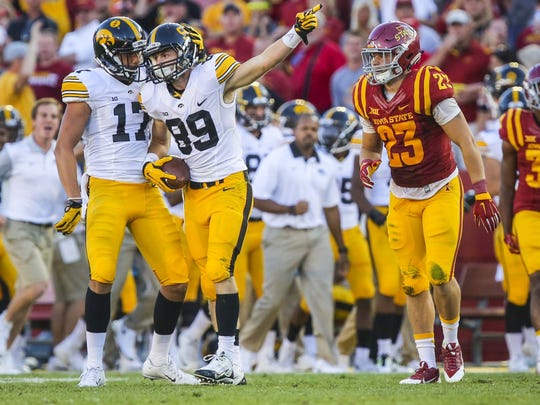 Iowa’s Matt VandeBerg (89) points down field after a long reception in front of Iowa State’s Darian Cotton during the Hawkeyes' 31-17 win in Ames in 2015. (Photo: Rodney White, The Register)

A 160-pounds-soaking-wet receiver came to one of Iowa’s one-day camps and found a way to stand out among hundreds of prospects.

“This kid just came flying out of nowhere, jumped right in front of me and … high-pointed the ball, came down, and it was a huge play,” assistant coach LeVar Woods told us a few summers ago. “He jumped up, and I went to pat him on the back and looked at his shirt, and I said, ‘Wait a minute.’”

Woods noticed VandeBerg hailed from Brandon Valley (S.D.) High School, just across the border from where he grew up in northwest Iowa. From there, VandeBerg got Iowa's attention, a grayshirt offer, then a phone call just before 2013 fall camp that the Hawkeyes needed him right away.

And now, if he stays healthy, VandeBerg will have played more games (54) than any Hawkeye in school history. Desmond King’s 53 is the record.

Like many in his class, he's been steady and sometimes spectacular.

Without VandeBerg, Iowa probably doesn’t beat Iowa State in 2015 on the way to a 12-0 regular season. His 65 catches that season remains the third-highest single-season total in school history. He’s been a captain. He enters Saturday with at least one catch in 29 straight games.

When Wadley gets to midfield Saturday and sees his mother, Sharonda Phelps, it’ll mark the end of a long journey.

“I’m not a big emotional guy, but I’m not sure, man. I don’t know,” says Wadley, who chose Iowa over Temple out of high school in Newark, New Jersey. “It’s going to be a relief that I’ve done it. Not a lot of people in my family where I come from go to Division I, Big Ten-type schools and finish.”

Early in his career, academic probation and fumbling problems buried Wadley on Iowa’s depth chart. But his 204-yard, four-touchdown breakout at Northwestern in 2015 marked a turning point.

He enters his final home game with 2,547 rushing yards, 10 shy of passing Owen Gill for No. 8 all-time at Iowa. His 30 career touchdowns are in range of catching Tavian Banks’ school-record 36. The past three years, in which Iowa has 26 wins and counting, he’s been a playmaker for an offense that desperately needed one.

"He's had a tremendous career," Ferentz says, "and it would be great to see him finish on a strong note."

How does this class want to finish?

Iowa (6-4) could still reach nine wins in what was supposed to be a rebuilding year. Perhaps these seniors have one more surprise in store for all of us — the Hawkeyes' first bowl win since 2010.

"The biggest thing now is finishing this year off right. It’s our senior year," Bower says. "Winning every game is the goal. It’s something this senior class would love to go out with.”