Boston College coach Steve Addazio is impressed with the intricate nature of Iowa's defense, which will be put to the test in the Dec. 27 Pinstripe Bowl.

Two minutes of footage from a Dec. 19 practice in Iowa City.

Stopping the run will be paramount for Iowa defenders like all-American Josey Jewell (43) in the Pinstripe Bowl. Boston College is averaging 290 rushing yards in its last six games.(Photo: Reese Strickland, USA TODAY Sports)

IOWA CITY, Ia. — You hear something so many times, eventually it is taken as fact.

Here’s one: The base 4-3 defense Iowa football has run since 1999 is basic, simple and predictable.

Steve Addazio — the fifth-year Boston College coach whose team will face the Hawkeyes in the Dec. 27 Pinstripe Bowl — would like a word.

“They're like experts at the coverage that they play. They have all the adjustments off of their coverage,” said Addazio, who should know as an offense-minded coach who came up through the ranks as Florida’s offensive coordinator under Urban Meyer. “They know what they're doing and their system of defense. They're very good at it.

“I think the people make the mistake maybe sometimes watching them on tape and thinking they're kind of vanilla, but they're not.”

Iowa teammates head out of a huddle as the team prepares on Tuesday, Dec. 19, 2017 for the Pinstripe Bowl . David Scrivner/Iowa City Press-Citizen
Fullscreen

Iowa quarterbacks warm up as the team prepares on Tuesday, Dec. 19, 2017 for the Pinstripe Bowl . David Scrivner/Iowa City Press-Citizen
Fullscreen

Iowa's running backs and fullbacks are pictured as the team prepares on Tuesday, Dec. 19, 2017 for the Pinstripe Bowl . David Scrivner/Iowa City Press-Citizen
Fullscreen

Hawkeye senior Ben Niemann — who as Iowa's do-it-all outside linebacker plays a lot of pass coverage — wouldn't go that far.

“We’ve run the same defense here for almost 20 years since (the late) Norm Parker was here,” Niemann said. “We’re maybe playing three different defenses per game. Not a lot of jazz to it or anything like that.

“If I was a Boston College coach watching us, I don’t see a whole lot of differentiations that we’re doing.”

On this issue, Iowa's consensus all-American middle linebacker is somewhere in the middle.

“If you look into it deep,” Josey Jewell said, “I guess it is pretty complex.”

The 7-5 Hawkeyes rank second nationally with 19 interceptions. Even with all-American cornerback Josh Jackson, you don’t intercept 19 passes as a team (and return four of them for scores) by presenting a predictable, vanilla defense.

The quietly intricate nature of the Hawkeyes’ defensive approach (and successfully teaching it) is a credit to Phil Parker, the sixth-year defensive coordinator who has been on Kirk Ferentz’s staff from the start in 1999.

But Parker’s defense will no doubt be put to the test a week from Wednesday at Yankee Stadium.

The 7-5 Eagles have been on an offensive tear in the last half of the schedule. But it’s not the air-it-out attack that’s gotten them up and down the field.

They’re running the ball, and they don’t care if you know it.

During their 5-1 finish to the regular season, they averaged 53.3 rushing attempts per game. To put that in perspective, Iowa ran 50 total plays in a Nov. 11 loss at Wisconsin.

Speaking of Wisconsin … that’s the Iowa opponent from 2017 that is most like Boston College.

The oversized Badgers bulled past Iowa, 38-14, behind a ground game that racked up 247 yards.

Iowa vs. Wisconsin Mark Marturello/Special to the Register
Fullscreen

The Eagles want to do the same, and — like Wisconsin — out of a variety of unpredictable plays out of heavy formations. They averaged 290.2 yards on the ground in their six-game finishing stretch.

They’ll run a lot of three-tight end packages. Sometimes, they’ll even line up an offensive lineman at fullback to add a little more power.

And behind those blockers is a 6-foot, 240-pound running back named AJ Dillon who has been unstoppable of late. He rushed for 1,099 yards in BC's final six games.

“This is definitely going to be a challenge for us,” Parker said, “to hunker down a little bit and see if we can stop the run.”

That, frankly, hasn’t been a strength for the Hawkeyes in 2017. They’re giving up 4.14 yards per carry for the season, which if it holds would be the second-most by an Iowa team since Year 3 of the Ferentz era.

“(The run) really starts to set off our throw game,” Addazio said, “then from there we can do the things that we have planned for this game. Our plan in this game is to be quite balanced, but that run game needs to be strong.” 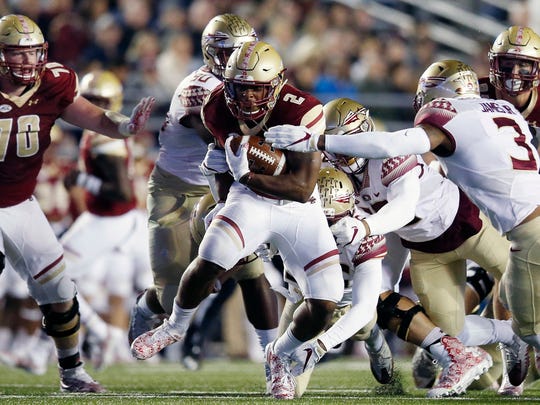 For those that thought this Pinstripe matchup would be a Hawkeye cakewalk, think again.

This BC outfit is also heading to Yankee Stadium with motivation — and fan support. A lot of people are expected to make the 199-mile trip from Boston College to the Bronx.

“We're jacked about the fact that this is like a home game for us,” Addazio said, “and we've got a great fan base there. Our kids couldn't be more excited.”

The best way for Iowa to knock down the Eagles’ enthusiasm?

By stopping the run.

Jewell said the Hawkeyes have been studying their mistakes against Wisconsin to prepare for what they’ll see from Boston College.

But the mission isn't.

“We’ve taken pride in our defense being physical and being able to stop the run," Niemann said. "We’re going to be put to the test. It’s up to us.”