Recinos had quite a few solid moments in 2017, but perhaps the most excited he got was never caught by the TV camera.

Iowa kicker Miguel Recinos has been a quiet weapon for the Hawkeyes in 2017, having converted on 50 of 52 placement attempts while being a force on kickoffs.(Photo: Bryon Houlgrave, The Register)Buy Photo

IOWA CITY, Ia. — Miguel Recinos did a lot of impressive things in his first year as Iowa’s full-time placekicker.

One of the most memorable, though, wasn’t captured by TV cameras.

After pummeling a kickoff from his own 20-yard line through the Nebraska end zone at Memorial Stadium for a touchback, the junior walk-on from Mason City went into full World Cup soccer celebration mode.

He launched himself into the air. He fired his fist horizontally, as if he were Michael Jordan scoring over Craig Ehlo in the 1989 NBA playoffs.

Some Hawkeye teammates on the sideline were jazzed. Once he made eye contact with them, he knew he needed "to do something" special.

“You saw that, did you?” Recinos said this week in advance of Wednesday’s Pinstripe Bowl matchup against Boston College in New York City. “That was pretty funny.”

Here's how the Hawkeyes fared in each of their bowl games over the last 10 years.

Recinos has a soccer background, in which he played goalie and forward. He said the touchback, which wound up traveling 90 yards with the wind after a few bounces, channeled the type of feeling he would get after making a big penalty-kick save or scoring a big goal.

And, with Iowa holding a four-touchdown lead, he just went nuts.

They’re often cut from a unique cloth, and Recinos is no different.

But he doesn’t have a screw loose (by comparison, Coluzzi used to carry a football named "Naomi" around campus). In fact, he’s about as cerebral as they come.

One of the most entertaining interviews on the team, Recinos was involved in some of Iowa’s most memorable special-teams plays this fall.

A plane flies over Kinnick stadium before the Hawkeyes take on Purdue on Saturday, Nov. 18, 2017, in Iowa City. The Hawkeyes take a 9-7 lead into halftime Brian Powers/The Register
Fullscreen

The Iowa Hawkeyes Riley McCarron catches a pass for a first down in the second quarter of their game against North Texas at home on Saturday, September 26, 2015. Brian Powers/The Register
Fullscreen

Iowa receiver Matt VandeBerg stretches to pull in a catch ahead of Nebraska defensive back Lamar Jackson on Friday, Nov. 24, 2017, at Memorial Stadium in Lincoln, Neb. Bryon Houlgrave/The Register
Fullscreen

Illinois' Malik Turner pulls in a catch ahead of Iowa's Josh Jackson during their game at Kinnick Stadium on Saturday, Oct. 7, 2017. David Scrivner/Iowa City Press-Citizen
Fullscreen 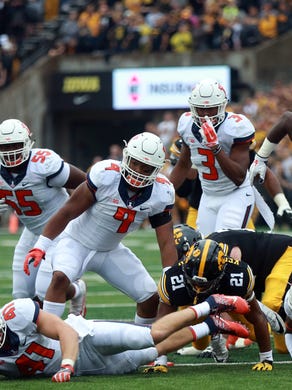 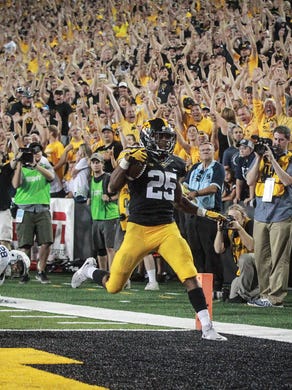 Iowa senior running back scores a touchdown to put the Hawkeyes up over Penn State in the fourth quarter on Saturday, Sept. 23, 2017, at Kinnick Stadium in Iowa City. Bryon Houlgrave/The Register
Fullscreen

Iowa fans wave their cell phone flashlights to the children at the University of Iowa Hospitals and Clinics Children's Hospital at the end of the first quarter against Penn State on Saturday, Sept. 23, 2017, at Kinnick Stadium in Iowa City. Bryon Houlgrave/The Register
Fullscreen

Iowa fans wave to patients at the University of Iowa Children's Hospital during the Hawkeyes' game against No. 4 Penn State at Kinnick Stadium on Saturday, Sept. 23, 2017. David Scrivner/Iowa City Press-Citizen
Fullscreen

After watching the wave and with the second quarter barely underway, 6-year-old Will Kohn is transferred back to his bed to begin dialysis for the next 17 hours at the UI Stead Family Children's Hospital on Saturday, Oct. 28, 2017, in Iowa City. Brian Powers/The Register
Fullscreen 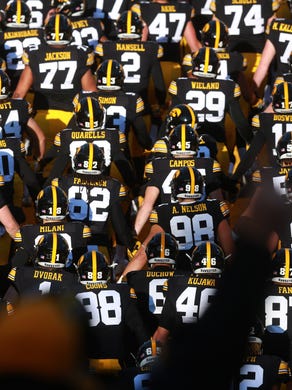 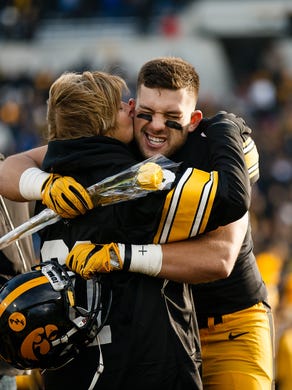 Iowa's Matt VandeBerg (89) runs onto the field to greet his parents for senior day before playing Purdue at Kinnick Stadium on Saturday, Nov. 18, 2017, in Iowa City. The Hawkeyes take a 9-7 lead into halftime Brian Powers/The Register
Fullscreen 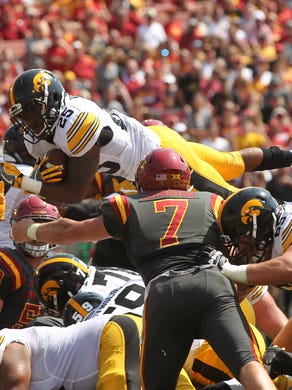 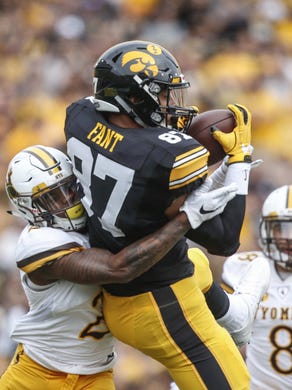 Iowa's Josh Jackson (15) breaks up a pass intended for Purdue's Jarrett Burgess (80) during the first half of their football game at Kinnick Stadium on Saturday, Nov. 18, 2017, in Iowa City. The Hawkeyes take a 9-7 lead into halftime Brian Powers/The Register
Fullscreen 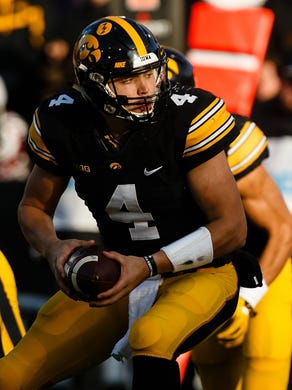 Iowa's Nate Stanley (4) makes a handoff during the first half of their football game against Purdue at Kinnick Stadium on Saturday, Nov. 18, 2017, in Iowa City. The Hawkeyes take a 9-7 lead into halftime Brian Powers/The Register
Fullscreen

Iowa's Manny Rugamba (5) jumps on Iowa's A.J. Epenesa (94) after he sacked Purdue's Elijah Sindelar (2) during the first half of their football game at Kinnick Stadium on Saturday, Nov. 18, 2017, in Iowa City. The Hawkeyes take a 9-7 lead into halftime Brian Powers/The Register
Fullscreen

Iowa's Matt VandeBerg (89) gets a few yards after a reception during the first half of their football game against Purdue at Kinnick Stadium on Saturday, Nov. 18, 2017, in Iowa City. The Hawkeyes take a 9-7 lead into halftime Brian Powers/The Register
Fullscreen

Iowa senior running back Akrum Wadley breaks through the grasp of Nebraska linebacker Collin Miller in the Hawkeyes' first touchdown of the day on Friday, Nov. 24, 2017, at Memorial Stadium in Lincoln, Neb. Bryon Houlgrave/The Register
Fullscreen

Iowa running back Akrum Wadley dives for a 70-yard touchdown during the Hawkeyes' game against No. 4 Penn State at Kinnick Stadium on Saturday, Sept. 23, 2017. David Scrivner/Iowa City Press-Citizen
Fullscreen

He ran a wheel route as a distraction while defensive end A.J. Epenesa caught a fake field-goal pass from holder Colten Rastetter at Michigan State.

He even lined up as a tight end when Iowa’s “Polecat” fake field goal brilliantly fooled Ohio State in that 55-24 rout.

He’s converted all 41 extra-point attempts and nine of 11 field goals. His only two misses? One was blocked, and the other at Northwestern he answered with a clutch, career-long 48-yarder that forced overtime.

He also was the point man on perhaps Iowa’s best special-teams area, kickoff coverage. Sometimes, he was instructed to boom the ball into the end zone to give opponents the ball at the 25-yard line (32 of his 64 kicks went for touchbacks).

Other times, he aimed to loop a high kick near the goal line with the goal of stuffing the return man inside the 20-yard line — which often happened. Even better than a touchback.

“I think I’ve had a pretty good year so far,” Recinos said. “Can’t get ahead of yourself too much. I learned a lot this year. There definitely were some very good things, and some things I’d like to have back.”

In fall camp, Recinos won a tight kicker battle over incumbent Keith Duncan. He kept the job all year while allowing Duncan to redshirt. But he knows he’s got one game to go, and it won’t be an easy one.

He’ll be kicking on a baseball field, perhaps in below-freezing temperatures. The extended forecast for the Bronx, New York, shows a high temperature Wednesday of 31 degrees.

He’s even bracing for snow, just in case.

“I don’t want to get Charlie Brown’d and have my plant foot slip out from under me,” Recinos said, “because that’s a very real danger. In kickoffs, I’d probably have to go off a three-step (approach) if it’s snowing.”

Recinos plans to survey the Yankee Stadium grass when he arrives next week to seek out divots or lumpy areas, and adjust possibly placements accordingly.

With kickers, the game is as much psychological as it is physical.

“Exactly. You’ve got to master the mental game,” he said. “I’ve had to get pretty good at it.”

So it should be no surprise that Recinos is considering adding psychology as a second major to his already-packed academic plate.

His tentative plan is to try for medical school after football (you read that right, he's a pre-med football player), with his major in health and human physiology. He's on track to graduate next December.

With his brains, he gets a lot of academic scholarship money. But he still has the goal of earning a full ride in football.

After what he did this fall, he no doubt deserves one.

The call could come from coach Kirk Ferentz next month, as it did entering for long snapper Tyler Kluver before his fifth and final year. But at Iowa, there is always a list of deserving walk-ons (leading receiver Nick Easley probably heads that group) waiting for one of those 85 football scholarships.

Whether he gets called into Ferentz’s office for the good news or not, Recinos plans to keep refining his kicking craft.

“My goal is far more concerned with performance,” Recinos said. “But don’t get me wrong, (a scholarship) would be a huge honor.”

Iowa is favored by 2½ points in the Pinstripe Bowl. In other words, oddsmakers think the game could come down to a field goal.

Perhaps we haven't seen the last of Recinos’ football celebrations in 2017.