The Hawkeyes practiced Sunday before flying to New York in what's the shortest bowl trip of the Kirk Ferentz era. 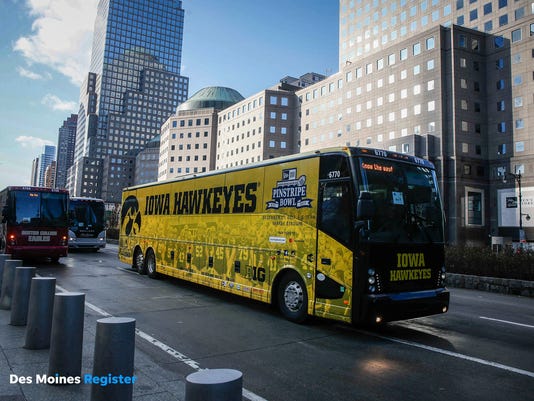 Pretty much every detail of preparation for Wednesday’s Pinstripe Bowl was wrapped up before the team’s Sunday-afternoon flight to the Big Apple.

Even the Christmas gifts.

Before they left Iowa City, each player was instructed to spend no more than $20 on one other player drawn at random.

"Some guys tried harder than others, I think,” offensive lineman Keegan Render said. “It was funny.”

Some played within the rules.

Solid jobs there of knowing your teammates.

Some bypassed the rules.

According to Jake Gervase, all-America defensive back Josh Jackson got a $70 fishing pole — deemed the top present of the exchange.

“One of the Paulsen (twins) ended up hooking him up,” Gervase said. “… Josh loves to fish.”

There were inside jokes.

Without naming names, Render said one player with a bigger nose was given “Pinocchio” on DVD.

“He calls it ‘fake juice’ where I try to bring some energy in practice, being rowdy and yelling,” Gervase said. “Just an inside joke between us.”

Bo Bower's gift from fellow linebacker Kristian Welch seemed to fall well short of the $20 ceiling — a poster and one canister of shaving cream for his balding head.

All that’s to say that the players seem to be having fun with bowl preparation, while also taking care of business — remember that word — back in Iowa.

The 7-5 Hawkeyes have taken advantage of their expansive, still-new Iowa Football Performance Center back home to get ready for Wednesday’s 4:15 p.m. CT, ESPN-televised game against 7-5 Boston College at Yankee Stadium.

They went through their last full practice Sunday morning before arriving at the team hotel here in Manhattan around 6 p.m. Players got some free time Sunday night to soak in the bright lights of Times Square.

Monday was their mandatory off day, just like Thursdays usually are on normal game weeks.

Tuesday will be a light practice and walk-through, just like Fridays. A day "to get all the mental stuff and physical stuff back down again," Jewell said.

“It’s more like a business trip,” Gervase said, “where we’re a little more focused and dialed in on the game.”

The Iowa Hawkeyes' football team spent Christmas morning touring the National September 11 Memorial & Museum in New York City. They will take on Boston College in the 2017 Pinstripe Bowl on Wednesday.

This is Kirk Ferentz's 15th bowl in 19 years at Iowa, but never has he made a postseason trip this short. The past two bowl games, for example, Iowa went eight days ahead (Rose Bowl) and seven days ahead (Outback).

This time, they arrived less than 72 hours before kickoff.

“It feels like a road game,” Jewell said. “The game’s coming up here pretty quick.”

There are lots of reasons for the abbreviated trip, many of them logistical. As an example, Ferentz didn't want his players stuck on a bus in New York traffic going to and from practices. The expense of the city also is a factor. But the main point is that Iowa has everything it needs back home.

For every reason, a change in approach is a smart move.

Here's how the Hawkeyes fared in each of their bowl games over the last 10 years.

The Hawkeyes have been routed in their last three bowl trips by Tennessee, Stanford and Florida, and have lost five straight bowl games overall.

Not that you (or they) need a reminder of that.

“I don’t know what it is. I think the coaches may know what it is,” Jewell said of the recent bowl flops; his fifth-year senior class is 0-for-4. “Who knows? I think it’s probably on the players. We need to do something better, something more.”

Players have been studying Boston College film since the day after the game was announced. They've been zeroed in on the BC game plan, Gervase said, for "10 to 12 days."

"We had a really good bowl-prep season," he said. "We had a lot of good practices." 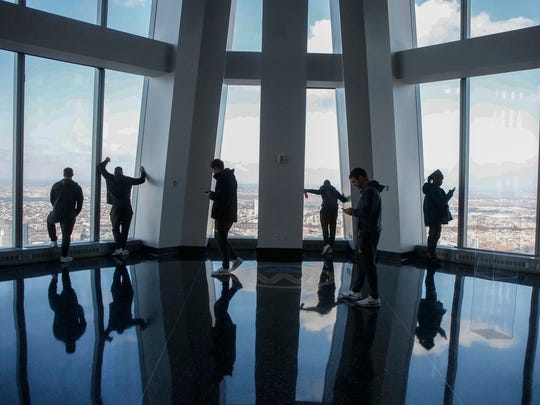 Members of the Iowa Hawkeyes football team look out over the New York City skyline from the 102nd floor of the One World Trade Center Observatory in New York City on Monday, Dec. 25, 2017. (Photo: Bryon Houlgrave/The Register)

Iowa remains a 2½-point favorite for Wednesday’s game. It’s the first time Iowa has been favored in a bowl game in nine years.

It’s time to win one.

Players are drilling down on that message.

“It’s a business trip,” Bower said. “… We’re just ready to play the game. I wish it was today, honestly. We’re ready to roll.”

Members of the Iowa Hawkeyes football team look out over the New York City skyline from the 102nd floor of the One World Trade Center Observatory in New York City on Monday, Dec. 25, 2017. Bryon Houlgrave/The Register
Fullscreen

Members of the Iowa Hawkeyes football team look out over the New York City skyline from the 102nd floor of the One World Trade Center Observatory in New York City on Monday, Dec. 25, 2017. Bryon Houlgrave/The Register
Fullscreen

Members of the Hawkeyes football team take photos from the 102 floor of the One World Trade Center observation deck in New York City on Monday, Dec. 25, 2017. Bryon Houlgrave/The Register
Fullscreen

The view of the Statue of Liberty from the 102nd floor of the One World Trade Center observatory in New York City on Monday, Dec. 25, 2017. Bryon Houlgrave/The Register
Fullscreen