A player's sudden transfer, a Caymans storm, a 20-point comeback, a missed free throw ... here's what shaped the Hawkeyes' 14-19 campaign.

Iowa coach Fran McCaffery discusses a 77-71 loss to Michigan that capped a 14-19 season.

NEW YORK — During Iowa basketball’s media day in October, sophomore forward Ryan Kriener said something representative of a team that had a slew of confidence entering the 2017-18 season.

I agreed with him. I predicted the Hawkeyes to finish fourth in the league, with a talented roster and a beneficial schedule.

How a 14-19 season transpired was something few, if any of us, saw coming. After Iowa’s final loss, Thursday’s 77-71 overtime defeat at the Big Ten Tournament here at Madison Square Garden, I asked Kriener: Were your expectations too high?

I think he’s right. This was a just a season of perplexing play and disappointment — though not without some defining and memorable moments.

There was no immediate panic, as Fran McCaffery’s son, freshman Connor, would skip his plans to play baseball and pull off his basketball redshirt to back-fill Williams’ role.

However, that plan would also soon unravel. Two days before the regular season, Connor sprained his ankle. Then he was diagnosed with mononucleosis. After he played four games with limited strength, he underwent an emergency tonsillectomy — then had to have the surgery repeated four days later, on New Year’s Eve. That ended his season. A medical-hardship waiver is probable.

“It affected us a lot, because we didn’t have the depth we thought we would have,” Fran McCaffery later said.

So, Bohannon was Iowa’s only point guard from the get-go. And he later acknowledged he was playing through painful plantar fasciitis for the first few months of the season.

It was a situation that would dog the Hawkeyes.

Connor McCaffery's two-sport plan at Iowa has become a zero-sport reality this school year, as he hasn’t played much basketball or baseball after repeated illnesses. Here, he talks with Chad Leistikow while in Ann Arbor, Mich.

After a 3-0 start against tomato-can opponents, the Hawkeyes flew to the Cayman Islands. Instead of paradise, they found a harsh storm warning.

Against first-round opponent Louisiana, the Hawkeyes looked lost. They scored 1 point in a first-half span of more than 9 minutes and trailed the Ragin’ Cajuns 37-17 at halftime. It was obvious that Iowa was physically inferior to the eventual Sun Belt Conference champions.

"When your offense is sputtering, your defense has to be at its best,” Fran McCaffery said in another telling quote for things to come, “and it was not.”

The Hawkeyes would lose to Louisiana, prompting a one-word tweet from Bohannon: “Relax.”

But it proved to be a calm before more storms. The next day, Iowa lost to South Dakota State.

A pattern of falling flat for lengthy stretches was beginning to form.

The Iowa fan base got more restless after a 79-55 drubbing at Virginia Tech, the first of four straight losses that dropped the Hawkeyes to an unexpected 4-6 start.

But what happened the day after the Virginia Tech game ultimately became one of the season’s biggest stories.

Without announcement, athletics director Gary Barta signed off on a contract extension for McCaffery that gave him a raise and elevated his buyout to $10.2 million if he were fired before July 1.

That news didn’t come to light until late January. By that point, the Hawkeyes' season had unraveled. A vocal minority of the fan base that wanted a coaching change then knew they weren’t going to get one — not with that kind of a buyout for a basketball coach.

As Barta justifiably came under fire for not going public with the extension earlier, he affirmed why he’s pro-McCaffery in an interview with the Des Moines Register.

“When I find somebody who matches our culture and is a proven winner and proven that they care about our student-athletes graduating, et cetera, I want to lock them in for a long time,” Barta said, “because I want them to stay.”

In a season void of signature wins, a game at the Sanford Pentagon in Sioux Falls, S.D., was about the closest thing for Iowa.

Though technically a “neutral” site game, the crowd was anything but impartial. It was a vocal black-and-gold crowd of 3,250 that saw their Hawkeyes play well to defeat Colorado 80-73.

It was a breakout game of sorts for Maishe Dailey, whose role would expand throughout the season. The sophomore scored a career-high 16 points. Colorado would finish in the lower half in the Pacific-12 Conference, but at that point in the season a four-game winning streak and the season’s first Power Five win felt like a possible turning point for the Hawkeyes.

Unfortunately, that would be Iowa’s only win against a top-100 RPI opponent all season.

The Iowa coach was ejected at Maryland.

An 0-4 Big Ten start — three of those losses coming at home — boiled over on a subsequent Jan. 7 game at Maryland.

McCaffery was rung for back-to-back technical fouls late in the first half of a tight game, and Iowa would unravel late in a 91-73 loss.

"I didn’t want to get tossed. I don’t think you ever want to put your team in that position and give them four free throws," McCaffery said afterward. "But at the end of the day, we’re out fighting for them. I’m going to fight for my guys.”

Officiating became a postgame storyline. Cordell Pemsl was on the receiving end of a cheap shot from Maryland’s Anthony Cowen. Forward Tyler Cook picked up a controversial technical foul that knocked him out of the game.

The game epitomized months of frustration for the Hawkeyes, as reality began to set in that this wasn’t the season they thought this would be.

Four days after the double-T drama, the Hawkeyes looked like they might be folding the tents. But a stirring Jan. 11 comeback in Champaign, Ill., showed signs that this team was not done fighting.

The Illini led a matchup of winless teams in the Big Ten 49-29 late in the first half at the State Farm Center. Behind 29 points from Jordan Bohannon and Luka Garza’s breakout performance, the Hawkeyes stormed back.

Garza scored 17 of his 19 points after halftime, spinning through a helpless Illini interior defense for one clutch bucket after another. The Hawkeyes won 104-97 in overtime for their third-biggest comeback win in school history.

And the enthusiastic, determined 6-foot-11 freshman from Washington, D.C., showed he was ready for the big time. Garza would finish the season with exactly 400 points, fourth-most for a freshman in school history.

Luka Garza finished his first year at Iowa with exactly 400 points, fourth-most by a freshman in school history behind Ricky Davis (464), Tyler Smith (461) & Jess Settles (414). Feel free to be excited about @LukaG_55.

Lackluster defense was the biggest culprit in Iowa’s disappointing season. The Hawkeyes were last in the league in scoring defense by a wide margin, and their adjusted-defense metric by KenPom.com ranked 249th nationally — by far the worst of the McCaffery era.

There was no more fitting snapshot of this than watching Penn State dunk on the Hawkeyes three times in a second-half span of 39 seconds during an 82-58 loss at the Bryce Jordan Center. 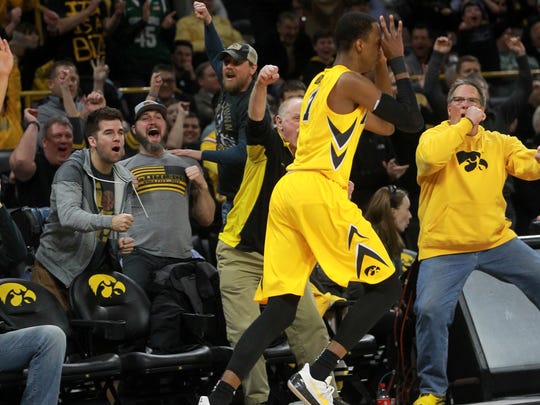 Even though the losses were mounting, it did feel like — at least at home — Iowa was figuring things out, bit by bit.

When No. 4 Michigan State came to town Feb. 6, the Hawkeyes were cooking.

They shot 52 percent overall, 45 percent from 3-point range against one of the nation’s most physical defenses. They had 26 assists against eight turnovers. They led 88-83 with 4½ minutes to go.

“I’m down on myself that we didn't call the right plays down the stretch,” McCaffery said after his team failed to score on four of its final five possessions.

Eleven days later at home, Iowa made its first 10 shots against Indiana. Overall, it shot 55 percent.

Bohannon’s 3-pointer in the final seconds was off the mark, and so was Cook’s putback try as time expired.

“It felt good coming off my hand. But it wasn't one of my nights tonight,” Bohannon said. "I've made those shots hundreds of thousands of times in practice.”

Such was the story of the season.

OK, so maybe the most memorable moment of the season was a missed free throw.

Bohannon could’ve broken it if he tried. He’s made his 12 free throw attempts since that miss. (That's 46 in a row when trying, by the way.)

In 13 perfect words, Bohannon said why he did what he did — and that he would’ve done it no matter the score.

“I know where the record deserves to stand, and that’s in Chris’ name.”

Street never got to try a 35th in a row. He was killed in a car accident three days after his last game as a Hawkeye.

If Bohannon had made the free throw, it would’ve been quickly forgotten. Because he missed, it’ll always be remembered.

ESPN, The Washington Post, NBC Nightly News and others all grabbed hold of this feel-good story.

A final fight, and a decision

This Iowa team can say it did something no other did in the four years before: win a game at the Big Ten Tournament.

The Hawkeyes' 96-87 victory against Illinois in New York City brought some smiles and relief, even if it was in the "Worst Four" portion of the Big Ten bracket. It also marked their first two-game Big Ten winning streak of the season.

It almost became three. An entertaining 77-71 overtime loss to No. 5 seed Michigan showed a Hawkeye squad that never gave up. Bohannon, Garza and Co. kept clawing until the season's 14-19 finish.

What will be most remembered from Thursday, though, was the postgame locker room, with leading scorer Cook being non-committal about his future with the program. And it brought the whole season full-circle.

A day before the season, one player left the program. Right after it, another looked like he was heading out.

In his final presser of the season, McCaffery was confident in saying the program was on stable footing.

“I’m really optimistic moving forward with the character in that locker room," he said. "... They’re (at practice) early, and they stay late. They continue to share the ball. There was no selfishness on this team at all.

"That’s what gives me reason to be optimistic. That’s what character is."