You would barely know, based on interviews or game-week promotion, that Kirk Ferentz will soon pass Hayden Fry as Iowa's all-time wins leader. 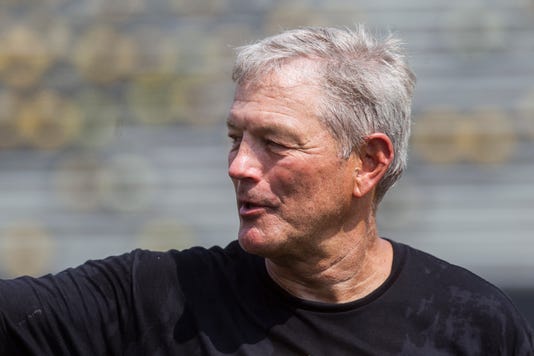 Among the things he mentioned:

Among the things he didn’t mention: himself.

In fact, it was 18 minutes into the press conference before anyone asked him a question related to the fact that with a win Saturday, he’ll move past Hayden Fry as Iowa’s winningest football coach.

The two are tied at 143 victories.

“As you might imagine,” Ferentz said, “I really don’t want to talk too much about that right now.”

At the Big Ten Conferences media days in late July, Ferentz respectfully made known to a huddle of Hawkeye beat reporters that he preferred not to take any more questions about his legacy or his past.

A lot of college programs produce clever, often viral videos of coaches awarding a scholarship to walk-ons. Kirk Ferentz doesn't do that at Iowa. Hawk Central

Of course, the classy coach that he is, he has still answered the few that have come his way. But he wanted the August focus to be all about his players, all about the 2018 Hawkeyes, all about their season ahead.

But it’s still our job to tell you just how remarkable this accomplishment would be.

Whenever Ferentz is credited with win No. 144, these will be the Big Ten’s five winningest coaches, in order:

It's a big deal ... except that it’s not inside the Stew and Lenore Hansen Football Performance Center. Aside from a few mentions in Iowa’s game notes, there’s little to no university promotion surrounding Ferentz’s inevitable passage of Fry.

Just as the current head coach would have it.

“It’s about what we do as an Iowa football team,” starting center Keegan Render said. “That just speaks to his character.”

Players asked about it Tuesday either weren't fully aware of Ferentz's win total or weren't going down that road.

“It’s not in our mind, either,” offensive lineman Levi Paulsen said. “We’re just really focused on preparing and winning.”

Even Ihmir Smith-Marsette, a quotable sophomore receiver, understood the drill.

“We’re just … focusing on the first game. Get through that, hopefully we get him his 144th, 145th win,” Smith-Marsette said, before correctly noting: “That’s a lot of wins.”

Ferentz has impressed upon his players that this Northern Illinois game is going to be a challenge.

Hawkeye fans should hope they have his full attention.

Consider this stat: In five games against Big Ten teams under coach Rod Carey, Northern Illinois is 4-1 — the only loss being by a 20-13 margin to then-No. 1 Ohio State in 2015.

This Northern Illinois team is the favorite to win the Mid-American Conference. Even though Iowa is favored by 10½ points Saturday, this will be a very tough opener.

“They play hard, they’ve got good players, they’re very well-coached. They put pressure on you in a lot of areas,” Ferentz said. “We know they’re going to come in here not looking to play competitive. They’re coming here looking to win.”

Ferentz quickly addressed the Fry stuff — but only because the question was well-phrased so that Ferentz would be praising the man who hired him, not himself.

In what way are the two of you alike?

“You may find this hard to believe," Ferentz answered. "We’re probably similar in a lot of ways. We just have very different personalities. He’s charming, witty … and right down the list.”

Fry brought showmanship to the head-coaching job at Iowa.

“I think (Fry) fooled a lot of people with the pants, the sunglasses and exotics," Ferentz continued. "But when it came down to really winning big games, it was all sound football."

That's what Ferentz has preached for 19-plus years at Iowa, too. Some of you might be tired of hearing it. But it's been the foundation of his program, which has produced five national top-10 finishes — from 2002 to 2015.

Even for a potentially historic moment.

“I know it’s a big and significant thing,” Render said. “But for us, it’s about getting to 1-0. And we’ll celebrate in the locker room afterward accordingly."