Some thoughts from Chad Leistikow after player and coach interviews as the Hawkeyes prepare for Saturday's 6:30 p.m. home game against Northern Iowa. 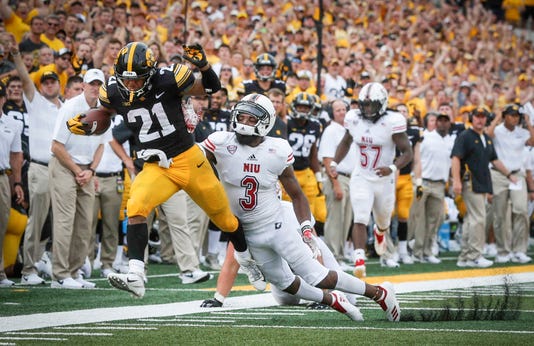 Kelly-Martin did not suit up for Iowa’s 13-3 win against Iowa State because of a left ankle injury. Smith-Marsette injured his left shoulder when he was tackled after a 45-yard gain in the third quarter against the Cyclones.

Both players are true sophomores.

Northern Iowa (0-1) is coming off a bye week and has historically given Iowa tough games. Still, if their health is borderline, there’s no reason to rush either player back. That much is especially true with Kelly-Martin, who has the speed and receiving ability out of the backfield to be a significant factor in the Sept. 22 showdown against Wisconsin, which could ultimately decide the Big Ten West Division title. 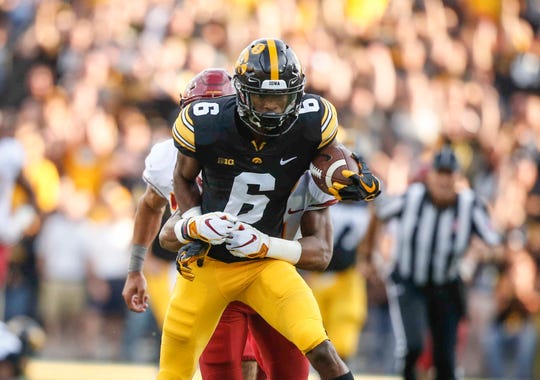 Ihmir Smith-Marsette was injured on this play against Iowa State, after the speedy sophomore pulled in a 45-yard pass from Nate Stanley. (Photo: Bryon Houlgrave/The Register)

Plus, there would be little incentive to increase Kelly-Martin’s season game count if Toren Young and Mekhi Sargent can shoulder the workload, as they did against Iowa State.

Under the NCAA’s new redshirt rule, Kelly-Martin (or any other player who hasn’t used a redshirt year) could play in four or fewer games and save a season of eligibility. Kelly-Martin’s current issue doesn’t seem serious, but if he’s cleared to play, Iowa still could consider suiting him up — and only deploy him if injuries or ineffectiveness come up.

By keeping Kelly-Martin's game count at one, it would improve the odds of his availability against the Badgers ... as well as his ability to redshirt, should he suffer a more significant injury as the season goes on.

Speaking of the redshirt rule ... this could be an interesting week. Nobody at Iowa can afford to think this way, but fans and media can: What if the Hawkeyes are way ahead at some point Saturday against the FCS Panthers?

This game would serve as a good opportunity for Iowa to get someone such as Spencer Petras, a true freshman quarterback, some game action without worrying about burning a redshirt.

Game action is invaluable to a young player's development.

It also could be a very good week for Henry Geil to get some carries, should Iowa be comfortably ahead and with Kelly-Martin dinged. Geil was one of five true freshmen who played in Week 1, but not Week 2. The others: defensive tackle Tyler Linderbaum, linebacker Dillon Doyle, safety Kaevon Merriweather and receiver Nico Ragaini.

"The first objective is win a game," Ferentz said. "But we kind of came in with a tentative plan in August, and the idea was to reassess things over the bye week (last week in September). And that's kind of where we're at right now."

Ferentz's disdain for the cut-blocking rule won't die. Last week during his pre-Iowa State press conference, Ferentz slammed the new-this-year rule, which essentially prevents an offensive lineman from blocking a defender below the waist once the ball is outside the tackle box.

This week, Ferentz added to his typical boiler-plate opening statement on the Big Ten coaches’ teleconference that he was watching an NFL game the other night and was blown away by what was called roughing the passer. And, he turned that into a cut-blocking conversation at the college level.

“Just in general,” he said, “I worry about our game a little bit.”

That’s a profound statement from a longtime offensive line guru, and it should have the NCAA's attention.

Ferentz, 63, is increasingly seeing football plays being taken out of football — while at the same time placing tough judgment calls on the shoulders of game officials. The low-blocking rule (like the one that cost Iowa’s Ross Reynolds a 15-yard penalty against Northern Illinois) isn’t reviewable — so whatever is called on the field, stands.

That's the main source of Ferentz's beef; the impossibility of consistent enforcement.

“Some of these calls we’re asking our officials to make are, in my opinion, putting a lot of pressure on them,” Ferentz said. “And making their jobs ... more difficult than they need to be.”

Jack Hockaday seems to be finding some senior magic. I remember a reporter from Illinois at Big Ten Media Days asking Ferentz about Hockaday, then a backup linebacker for Iowa who didn’t seem to have a home in the starting lineup.

I also remember Ferentz’s response that day: That he hoped that maybe Hockaday, a senior who had mainly been a special-teamer, would break through in his final year like 2015 with Cole Fisher — whose 14 career starts at weak-side linebacker all came on Iowa’s Rose Bowl team.

Turns out, that was quite the premonition from the 20th-year coach.

Unprompted, free safety Jake Gervase brought up the Hockaday-Fisher comparison Tuesday. Hockaday hasn’t been flashy, but he’s been solid at middle linebacker since replacing Amani Jones in the first quarter against Northern Illinois. Hockaday leads the Hawkeyes with 13 tackles — already a career high for a season.

Linebacker has been Iowa's most fluid position group (five starters in two games). And although Ferentz said Hockaday has done "a really nice job" and continues to practice with the No. 1 unit, the senior has a long to-correct list.

"We got away with a few things that could have been costly (against Iowa State)," Ferentz said, "and so we still have a lot to work on, and Jack has got some stuff on his list, too."

Bring a handkerchief to Saturday's game.

“I was struck by what a genuine human being he was … and what a sweet guy he is,” said Green, who on Tuesday spoke to reporters following Ferentz’s weekly news conference.

Their friendship helped lead to Green's plan to perform his 2003 hit, “Wave on Wave” — with help from both schools' marching bands — at halftime of Saturday’s game. He made a point to mention that he will sing with this week’s Kid Captain, 6-year-old Quinn Stumpf, in mind.

For most of her life, Quinn has experienced seizures. In 2015, she was diagnosed with a muscle-movement disorder that is so rare it doesn’t have a name.

Green’s song, the traditional end-of-first-quarter wave and Stumpf’s story are poignant reminders that football is just a game — and a happy, albeit brief, distraction for the kids across the street in the UI Children's Hospital.