Leistikow: A perfect Hawkeyes opportunity to change the Wisconsin narrative

If Iowa is going to have a chance at a Big Ten championship in 2018, it must beat Wisconsin on Saturday.

Leistikow: A perfect Hawkeyes opportunity to change the Wisconsin narrative 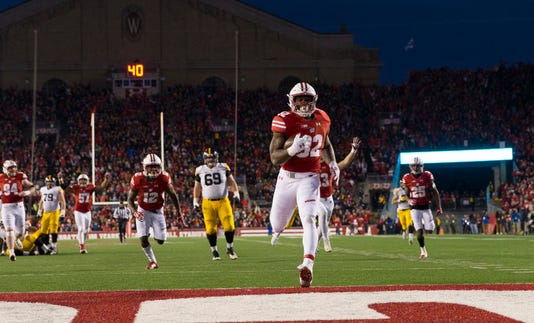 IOWA CITY, Ia. — Maybe it was the fact that, the week before, Iowa had pulled off one of the most mind-blowing performances in school history — a thorough 55-24 whipping of mighty Ohio State.

Maybe it was that key first-year starters couldn't handle the toughest road environment of their young careers.

Maybe it was that Wisconsin was steamrolling its way to a 13-win season and dominance in the Big Ten Conference's West Division.

Whether it was a letdown or all of the above, the Hawkeyes ran into a Badger buzzsaw last Nov. 11 at Camp Randall Stadium. And it was humbling for anyone associated with Iowa football.

Keegan Render played left guard that forgettable afternoon for an Iowa offense that gained a pathetic 66 yards, by far the lowest total of Kirk Ferentz’s 242 games as head coach.

"Just something wasn’t there mentally, obviously,” Render said Tuesday. “We just kind of went into sleep-walking.”

Except for cornerback Josh Jackson, who accounted for both Hawkeye touchdowns in a 38-14 Badgers win, listless performances by Iowa’s best players were puzzling.

“We weren’t ready to go,” said Jake Gervase, Iowa's free safety in that game. “That’s something we’ve got to change.”

Well, Hawkeyes, now is your chance.

And there are no excuses for a flat performance this time around against the divisional powerhouse.

Saturday’s 7:30 p.m. matchup will be played at sold-out Kinnick Stadium.

“As soon as we step off the bus Saturday night, it’s going to be a different feel,” Gervase said. “Just because of the stakes, just because of our opponent.”

When Ferentz surveyed Iowa’s 2018 football calendar, he divided it into two sections.

The first part: Four weeks of training camp, then four September games — all at home. That’s eight weeks before the team’s bye.

The second part: Eight games in eight weeks, including five road trips in seven weekends, in the mad dash to the finish.

“Nothing scientific,” Ferentz said of the scheduling division. “It just came to me one night, and I figured I’d throw that one out there.”

Afterthought or not, the season split seems to be resonating with his players.

They're feeling the urgency.

With Tuesday’s practice in the books, Render spoke of the rest of this week as “a four-day season.”

“We have to put it all on the line, because we’re not going to have a game next week,” Render said. “So you’ve got some time to recover.”

While players and coaches typically tamp down the idea that one game is more important than another, the obvious reality is that the 16th-ranked Badgers were made a heavy favorite to win the Big Ten West. Iowa was picked second and just completed a 3-0 nonconference season.

A loss Saturday is the equivalent of two losses in the West standings, with head-to-head result being the top division tiebreaker. A loss to the Badgers, and the Hawkeyes would need to win their last eight Big Ten games and hope Wisconsin loses twice more to win the West.

Not as good a chance as Iowa just beating Wisconsin straight-up on Saturday. The Badgers are 3-point favorites.

“Coach Ferentz was already getting emotional in (Sunday's) team meetings," offensive lineman Levi Paulsen said. "Because a Big Ten game in Kinnick under the lights? That doesn’t come very often. And it’s a battle of pretty much the best in the (division) right now."

There's urgency for Iowa, and for good reason.

"We know if we want to achieve our goals and go to the Big Ten championship, it goes through Wisconsin,” Render said. “It’s proven. It’s not something you can debate.”

One by one, Iowa players were seemingly asked to revisit the debacle of last season, in which the Hawkeyes didn’t have a single play gain more than nine yards.

“Last year is last year," tight end T.J. Hockenson said. "We aren’t even playing an opponent this week, is our mindset. We’re playing ourselves. And we have to be at a championship level."

In other words, Iowa's trying to be the best Iowa it can be.

Is it good enough? We're about to find out.

Its stated program goal is to win Big Ten championships.

The stage couldn't be more perfectly set for the Hawkeyes.

They're motivated after last year's loss. They see a first-half finish line in sight and some much-needed rest ahead. Their biggest West rival is coming to visit their turf, staggering after Saturday's surprising home loss to Brigham Young, under the Kinnick lights.