The Hawkeyes could get sophomores Ivory Kelly-Martin and Ihmir Smith-Marsette back in time to face the Badgers. Both are practicing. 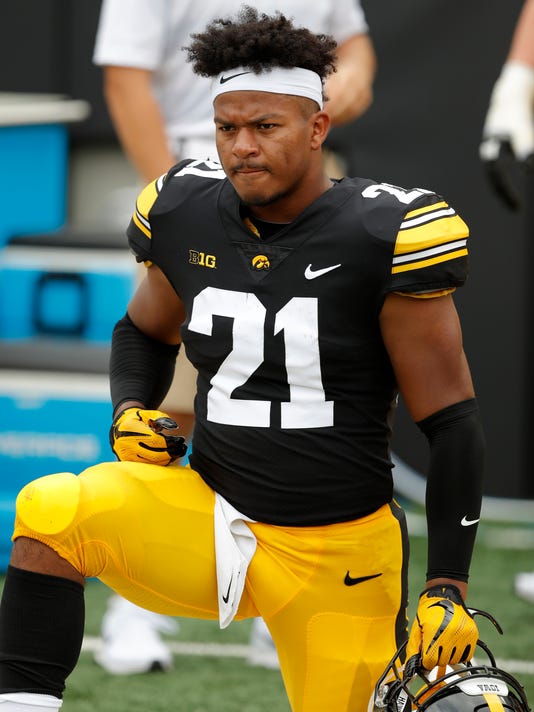 Ivory Kelly-Martin carried 16 times for 62 yards in Iowa's season opener before injuring his left ankle in the fourth quarter. He averaged 9.2 yards per carry as a freshman.(Photo: Charlie Neibergall, Associated Press)

IOWA CITY, Ia. — It looks promising that Iowa will get its top running back on the field for Saturday’s Big Ten Conference opener against Wisconsin.

Ivory Kelly-Martin, who has missed the Hawkeyes’ past two games with a left ankle injury, was nearly a full participant in Tuesday’s practice.

“He’s a playmaker,” fellow running back Toren Young said Tuesday. “Getting him back helps a lot.”

In fact, on the Big Ten coaches teleconference, Iowa’s Kirk Ferentz said that the prognosis also looked good for receiver Ihmir Smith-Marsette (left shoulder) and starting right guard Cole Banwart (lower leg) to be in uniform against the Badgers.

“All three guys that missed last week were on the field today and worked fairly extensively,” Ferentz said. “We’ll have to see what they feel like (Wednesday). But we’re cautiously optimistic.”

What a lift that would be to Iowa’s offense, if Kelly-Martin and Smith-Marsette were available. They are two of the fastest players on the team.

Kelly-Martin’s speed and ability to catch the ball out of the backfield gives Iowa maximum play-calling flexibility; that's why he was the No. 1 running back entering the season. And Marsette (who injured during his 45-yard reception against Iowa State) is the type of deep threat who can keep the Badgers’ attacking defense honest.

“If you can hit one or hit two (deep balls), then the safety’s got to respect it a little more,” Iowa center Keegan Render said, “and they can’t play as well in the run game.”

The numbers don't lie. When Nate Stanley is accurate, the Hawkeyes are at their best. And Stanley was at his best, statistically, in Saturday’s 38-14 win against Northern Iowa.

Not lost on the junior quarterback was the fact that he completed a career-best 82.1 percent of his passes (23-for-28) for 309 yards. That contributed to 545 yards of total offense, eighth-most in the Ferentz era.

“It’s just consistency,” said Stanley, who despite a pristine touchdown-to-interception ratio (26 to 6) a year ago only completed 55.9 percent of his throws. He was only 52.9 percent (27-for-51) in wins against Northern Illinois and Iowa State. “I had the opportunity to be better in the first two games, too.”

This is a correlation worth mentioning — and repeating.

Iowa fullback Brady Ross has been a critical piece to the Hawkeyes' run game through three weeks, even as a runner at times. Hawk Central

You hear it on the TV broadcasts every week, that Iowa is one of the few teams in the country to use a fullback.

The Hawkeyes’ 6-foot, 245-pound wrecking ball was punishing as a blocker during Iowa’s 38-14 win against Northern Iowa. But what also was not lost was the junior’s (surprising?) athleticism.

On fourth-and-1 from UNI’s 45-yard line, Iowa decided to go for the first down. Offensive coordinator Brian Ferentz called a fullback dive.

“Every fullback goes to bed and dreams about getting a dive and it just parting like the Red Sea,” Ross said Tuesday. “And you just run to the end zone untouched.”

Of course, that rarely (if ever) happens. In fact, Ross didn’t have a single carry last season despite playing all 13 games. So when Ross got the call on fourth-and-1, he improvised. He not only dove over the pile, but he executed a mid-air somersault for a 3-yard gain.

First down. Iowa drove in for a touchdown and a 21-0 lead.

“Everyone had their pads down, which was good,” Ross said. “I can’t jump very high.”

The call on Levi Paulsen was so bad against Northern Iowa, Kirk Ferentz couldn’t help but mention it during his Tuesday press conference — even in the middle of an answer about former Hawkeye Aaron Kampman, who this week will be added to the ANF Wall of Honor at Kinnick Stadium.

“We got screwed again on that one, OK?” Ferentz said.

Asked to elaborate, he did. But he said he’s going to “shut up” after this latest rant, which stemmed from Paulsen getting flagged for a 15-yard penalty for an illegal low block — that looked 100 percent legal on film.

“For the record, I’m not upset with the officials on the field. To officiate it properly, it ought to be reviewable, like targeting,” Ferentz said. “But who wants to review a cut block? It could be fixed so easily. One stroke of a pen.

“But it’s not a tempo rule, an RPO rule. So it’s not very fashionable, so nobody really cares. And it’s really frustrating. Because we’re screwing up a good game here a little bit.”

“"We’ll take a cut block here and there," Paulsen said. "You saw last week, we went back 15 yards and (still) scored.”

Asking an official to simultaneously determine whether the football is inside the tackle box while determining if the block occurs within five yards of the line of scrimmage and being proficient in geometry (the blocked player has to be squared up in the "10 and 2" position) is ridiculous. The rule needs to be revoked or reviewable.

Here's hoping Ferentz doesn't keep quiet about it, until it's fixed.

Now for some talk about a good NCAA rule.

The new legislation that allows a player to redshirt once if he participates in four games or less in a season has had Ferentz and his staff giving newcomers a closer look.

One of those rookies who got a few snaps was wide receiver Tyrone Tracy. And he delivered with a 22-yard catch on a pass from Peyton Mansell. Ferentz said the decision to give Tracy his first college action was a combination of being “a little thin” at wide receiver and the redshirt rule.

“We wanted to give him a chance. We were able to do it free, which was great, Ferentz said. “He actually made a play, which was better. Got up after he was nailed. That was good to see.”

Ferentz has said the staff will re-evaluate their approach to the new rule during Iowa's bye week, which occurs after Saturday's 7:30 p.m. game against Wisconsin.