With four one-loss teams leading the Big Ten West, it's all about Maryland this week for the Hawkeyes. Also, Nate Stanley has a big quiz this week.

Ihmir Smith-Marsette talks about the hurdle at the end of his kickoff return. What did he think of his form? Hawk Central 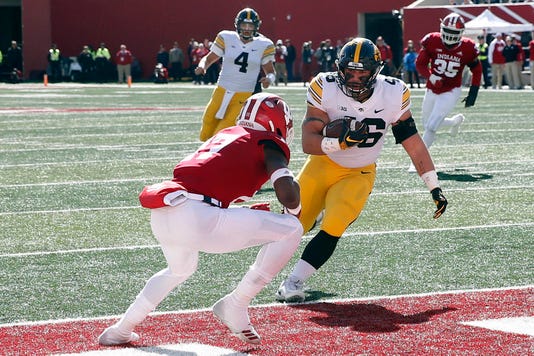 Austin Kelly, who scored his first career touchdown at Indiana, will likely have the most prominent role of his career Saturday vs. Maryland. The backup fullback is now the starter, with Brady Ross sidelined.(Photo: Brian Spurlock/USA TODAY Sports)

IOWA CITY, Ia. — Whether they were truly upbeat or just putting on the best possible faces at a tough time, I distinctly remember Iowa players dismissing the idea that the Big Ten Conference's West Division race was settled Sept. 22 despite losing at home to Wisconsin earlier that Saturday night.

“The sun will come up tomorrow,” defensive end Anthony Nelson said then.

“Anything can happen from here,” center Keegan Render said after that 28-17 loss.

Revisiting that topic Tuesday, Render was spot on.

Since that time, Iowa has won two straight road games in impressive fashion. Wisconsin was routed by Michigan. Northwestern has surged, with clutch wins against Michigan State and Nebraska. Purdue still just has one Big Ten loss — in the season opener to Northwestern.

Those four teams have an all-important “1” in the conference loss column. Wisconsin (home vs. Illinois) and Northwestern (at Rutgers) are likely going to keep that “1” in place for another week. Purdue could to drop to “2” with a Saturday game against second-ranked Ohio State.

Wisconsin (4-2, 2-1) still has the inside track in the division with its head-to-head win against Iowa. But the Badgers look increasingly vulnerable. Northwestern (3-3, 3-1) hosts Wisconsin on Oct. 27, then comes to Kinnick Stadium on Nov. 10.

Iowa and Wisconsin both have trips to Penn State ahead.

There’s a lot of football to be played.

“The best thing that our team has done going forward is one week at a time,” Render said. “The only way (a division title is) going to happen is us winning. It doesn’t matter what other things happen outside of us. As long as we win, we know there’s going to be a chance at the end, no matter what else happens in our division.”

Iowa quarterback Nate Stanley didn't get a chance to watch Beathard's Monday Night Football game, but he was his understudy for one year at Iowa. Hawk Central

Nate Stanley didn’t get to watch C.J. Beathard quarterback the San Francisco 49ers to a near-upset of the Green Bay Packers this week on Monday Night Football.

“I’m studying for a little quiz I have this week,” the health and human physiology major said Tuesday.

He was also studying Maryland film, fresh off his six-touchdown performance against Indiana that earned him national and Big Ten honors. But he did discuss Beathard’s influence on him as a quarterback. Stanley earned the No. 2 role as a true freshman behind Beathard in 2016.

Stanley learned to be more vocal from Beathard, a natural leader. Beathard also taught him the amount of film study required to be a high-level quarterback.

“He was a very conceptual player, a very cerebral player. He was very good at being able to see things,” Stanley said. “He had a lot of information about situations that maybe weren’t on tape because of past experiences he had. So, I think his ability to recall that stuff in the past really allowed for him to be able to watch tape more critically and get more out of it.”

That’s kind of a complicated answer. But Stanley (6-foot-4, 242 pounds) is continually putting outstanding film together for a potential jump to the NFL someday. And seeing an Iowa quarterback play on the national stage is no doubt a feather in the cap for the Hawkeye program.

That's because his final pass at Indiana, which was "supposed to go into the stands" according to head coach Kirk Ferentz, was changed to a team passing attempt. (Those are usually reserved for intentional incompletions, like spiking the ball to stop the clock.)

In this case, Stanley's heave took place on fourth down with 3 seconds left, basically so Iowa wouldn't have to punt. As a result, Stanley ended up 21-for-32 for 320 yards — a crisp 10 yards per passing attempt.

Also, Noah Fant was credited with one extra receiving yard, so he ended up with a four-catch, 102-yard day. Mekhi Sargent's receiving total was docked one yard.

More change is occurring in the Hawkeye backfield.

Ivory Kelly-Martin is back at practice after missing the Indiana game with a concussion.

But fullback Brady Ross will not play against Maryland, Kirk Ferentz said Tuesday, and might miss several weeks. Ross suffered a left leg injury in the second half at Indiana. That’s a big loss; Ross has been a powerful, steady blocking back and even a reliable third-down outlet in the passing game.

Austin Kelly, a fifth-year senior, is the next man in. He played 11 of Iowa's 31 fullback snaps at Indiana. I would expect Iowa to reduce its number of fullback formations against the Terrapins, with limited remaining depth there. Redshirt freshman walk-on Joe Ludwig is the new backup.

One sack allowed per game is both great ... and unacceptable.

I stumbled into this one when chatting with left guard Ross Reynolds. I referenced that the offensive line did a good job against Indiana, except for that one sack of Stanley that occurred against a three-man rush at the end of the first half.

"I gave that up," Reynolds dead-panned.

“It’s very bothersome," the fifth-year senior continued. "That shouldn’t happen. No matter what rush they give us, that’s not allowed."

Perfection is a fine goal, but not realistic. Iowa's six sacks allowed in six games is by far the best number in the Big Ten. Three teams (Penn State, Rutgers and Wisconsin) are tied for second with 10 sacks allowed.

Iowa junior Devonte Young explains why he made the move from wide receiver to safety, and how the transition is going Hawk Central

Devonte Young said “it was a program decision” for him to move from wide receiver to strong safety during Iowa’s bye week.

The junior switched his number from 80 to 17 and is trying to learn a position he hadn’t played since his high school days in Maryland.

"There was just another opportunity for me to get better,” Young said. “I’m just trying to fulfill my role in the program."

Young has zero career catches, but he is a member of all four Hawkeye special-teams units. He returned one kickoff for 24 yards Saturday at Indiana. It's the only time he’s touched the ball this season.

Young said he’s been getting a crash course at safety from Miles Taylor, who was a three-year starter at the position and is now a graduate assistant coach.

Given Young is already on Iowa's travel roster as a special-teamer, it's a smart move to engage him at safety if he wasn't going to be of use at receiver.

"He's doing a lot of really good things out there," Ferentz said. "We talk to guys all the time about finding a role. Sometimes you just have a role, you don't find it."

The Register's Mark Emmert contributed to this report.