The Terrapins will run a lot of distracting motion and formations to confuse defenses. It'll be the Hawkeyes' toughest mental preparation of 2018. 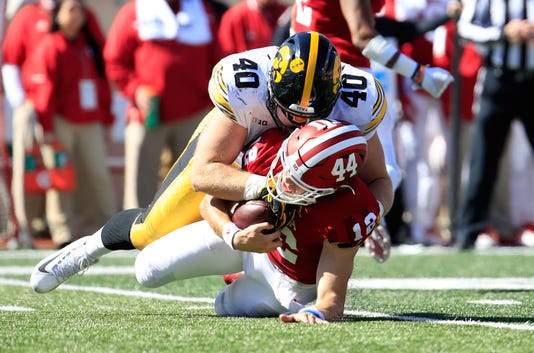 Iowa defensive end Parker Hesse (40) and his teammates will have to stuff the run game against a Maryland team that is averaging more than 6.0 yards per carry.(Photo: Andy Lyons, Getty Images)

IOWA CITY, Ia. — You may not think about it this way, but Kirk Ferentz is an offense-minded football coach. Sure, he’s known as a line guy. But the entirety of his assistant-coaching career was spent in offensive meetings, about ways to move the football — not ways to stop it.

So when he returned to Iowa as a head coach in 1999, it was a natural transition from his predecessor.

Hayden Fry was the offensive guru, with Bill Snyder as his right-hand man. They left the defensive operation to coordinator Bill Brashier and a staff that included Barry Alvarez, Dan McCarney and (eventually) Bob Stoops.

“One of my goals when I came here was to model it like Coach Fry had it,” Ferentz said Tuesday. “I don't think he worried too much about the defense, because he had great trust in Bill. I was never fixated on 3-4 (alignment) or 4-3 or any of that stuff. My picture was more how we were going to play.”

Parker would bluntly tell Ferentz what the defensive plan would be — even if Ferentz suggested something different.

Parker’s pièce de résistance as Iowa’s defensive coordinator is undoubtedly the 2010 Orange Bowl — Ferentz’s lone major bowl win. The 2009 Hawkeyes were sizable underdogs to Paul Johnson’s dynamic triple-option offense. But with Parker having weeks to prepare, the Hawkeyes held the Yellow Jackets to 155 total yards and that year’s first-round NFL Draft pick at receiver, Demaryius Thomas, without a single catch in a 24-14 win. 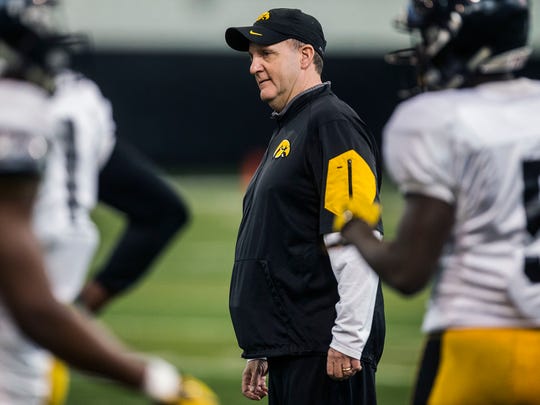 Iowa defensive coordinator Phil Parker has been on Kirk Ferentz's staff since his first year of 1999. (Photo: Kelsey Kremer/The Register)

Flash forward to this week.

In his opening remarks at his Tuesday news conference, Ferentz compared that Georgia Tech preparation to the one his team is facing this week. The 22nd-ranked Hawkeyes host an unconventional opponent in Maryland (11 a.m. Saturday, ESPN2) that tries to break big plays out of a run-oriented offense based on constant misdirection.

“When they throw it, they tend to be real big plays,” Ferentz said. “I think the parallel to Georgia Tech is there's just a lot of things going on.

“It's a really important week for us, mentally.”

For the past six-plus seasons, Ferentz has left the Iowa defense to the hands of Phil Parker. Though he is no relation to Norm, who passed away in January 2014, Phil Parker is a loyal protégé of the architect of the 2010 Orange Bowl plan.

Phil Parker, no surprise, has carried on Norm’s legacy of having technically sound, physical and opportunistic defenses.

How will an Iowa defense that despises big plays defend a run-heavy offense that schemes to uncork them?

The Terrapins (4-2, 2-1 Big Ten Conference) have five touchdowns from scrimmage covering 50 yards or more. They average 245.2 rushing yards per game and a remarkable 6.03 per attempt.

Running back Ty Johnson averages 8.1 yards a carry; Anthony McFarland averages 8.9. This is the fastest set of skill players Iowa (5-1, 2-1) will face all year.

“They run away from everybody,” defensive end Parker Hesse said. “It’s our job to make sure they don’t get into situations like that, where it’s a foot race.”

One of Maryland’s secrets is eye candy. It tries to distract defenders from where the ball’s actually going. One guy gets caught going the wrong way, and one of Maryland’s many explosive athletes is running the other with the football.

“Assignment football,” Hesse said. “That’s what it comes down to.”

The Terrapins will use a lot of window dressing in their run game, Iowa defensive end Parker Hesse says. Hawk Central

And, so, Saturday becomes the Phil Parker game of 2018.

In some ways, it's already been a Phil Parker season.

Yet there's been little jealousy about playing time.

Even though Parker’s known to be tough on his players, he’s generally beloved by them for how much he cares. It doesn't hurt that he's got a track record of shuttling under-recruited defensive backs to NFL prominence — Micah Hyde, Desmond King and Josh Jackson, to name a few.

“It’s nothing personal. You can’t take it personal,” said co-captain and free safety Jake Gervase in regard to Parker’s tough love. “There’s a mutual respect. We all understand that he’s got our best interests. He only wants to help us win ballgames. He cares about the game of football more than anybody I’ve been around.”

So, what kind of Parker "magic" (as safety Amani Hooker called it) does the 20th-year Ferentz assistant have up his sleeve for the Terrapins?

For starters, Parker will welcome the return of Nick Niemann at outside linebacker. That’s big, because Niemann provides a stout (6-foot-4, 232 pounds) presence against the run. While Niemann missed the Minnesota and Indiana games with a knee injury, Hooker (6-0, 210) was moved into the outside role, as a third safety, against two pass-oriented opponents.

Starting middle linebacker Jack Hockaday, though, is out for another week. That means Parker will likely deploy his sixth different trio of starting linebackers in seven games — Kristian Welch, Djimon Colbert and Niemann.

Yet despite that constant shuffling, Iowa enters Saturday ranked third out of 130 FBS teams in rushing defense, fifth in total defense and 13th in points allowed.

"As long as we prepare like we are starting," Colbert said, "no matter who’s put out there each week, we’ll be ready."

Each Monday, Parker presents that week's game plan to his defensive players. They have three days of practice, plus film study, to prepare.

It's days, not the weeks that Norm Parker had for Georgia Tech after the 2009 regular season.

But no doubt, Phil Parker has a plan.