Leistikow: Sizing up the future of Iowa's growing offensive line

With Tyler Linderbaum moving to offense, that indicates uncertainty about this position group entering 2019. Let's look at all 16 scholarship players.

Leistikow: Sizing up the future of Iowa's growing offensive line

Could Alaric Jackson, Tristan Wirfs and Mark Kallenberger play together in 2019? And what about this Outback Bowl opponent on Jan. 1? Hawk Central 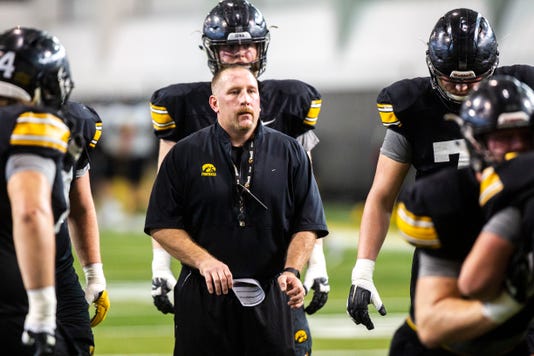 IOWA CITY, Ia. — Iowa’s offensive line probably hasn’t received enough credit for a solid 2018 season of football. While the run game was pedestrian, sure, the pass protection was consistently elite.

That was an important accomplishment for two big reasons.

One, Iowa had allowed an average of 28.3 sacks over the previous three seasons. Correcting systemic flaws and communication issues were a high priority.

Two, junior quarterback Nate Stanley’s health was vital considering his two backups are unproven freshmen. Stanley started every game and played well in an 8-4 regular season. Without him, Iowa would have struggled to top .500.

By extension, credit needs to go to second-year offensive line coach Tim Polasek — who discussed recently what he wants his group's identity to be.

“Tough, smart, physical, feared, hated, respected,” Polasek said. “The group has kind of captured my personality a little bit. We’re really trying to be enthusiastic about our work — go out there and attack it with a great deal of urgency."

A recent addition would seem to fit right in. Iowa announced Dec. 19 that freshman Tyler Linderbaum, a U.S. Army All-American from Solon, had switched from defensive tackle to center. Linderbaum is known for playing with a mean streak that should suit this unit well for years to come.

The future of Iowa's offensive line is certainly topical. Three of the top six are departing fifth-year seniors. Keegan Render, Ross Reynolds and Dalton Ferguson will play their last games as Hawkeyes in the Jan. 1 Outback Bowl against Mississippi State.

How will they be replaced?

Let’s take a look at all 16 scholarship linemen for 2019 — the ones that’ll eat the most food at their Christmas feast. (Note: Year in school is based on 2019 eligibility.) 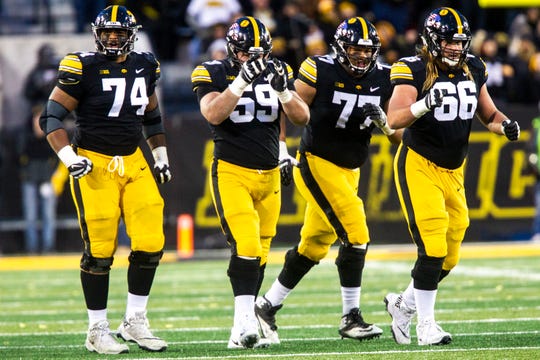 Cole Banwart (6-4, 296, RS jr.) — Made six starts at right guard despite being slowed by an ankle injury. He's the leading candidate to take over for Render (32 career starts) at center. “When he’s been healthy and really playing fast, (he’s) been pretty good,” Polasek said.

Tristan Wirfs (6-5, 320, jr.) — Outstanding pass blocker who needs to be more decisive in the run game. Entering his third year as a starting right tackle. "This guy’s close in the pass game of being a lock-down guy," Polasek said.

Others with meaningful game experience (3)

Landan Paulsen (6-5, 305, RS Sr.) — Levi’s twin brother has never started, but saw meaningful snaps at guard down the stretch and has had a strong December. “I think he’s played his best five or six weeks of football,” Polasek said.

Levi Paulsen (6-5, 305, RS Sr.) — Has one start in each of his three seasons (one at guard, two at tackle), and Iowa has won every time. The veteran would seem to be a leading contender at right guard if Banwart locks down the center job.

Mark Kallenberger (6-6, 282, RS soph.) — Saw extensive action in the season opener when Iowa’s starting tackles were suspended, but Polasek wants to see more: “We’re all rooting for him. He’s got to start to want to do it completely himself.” 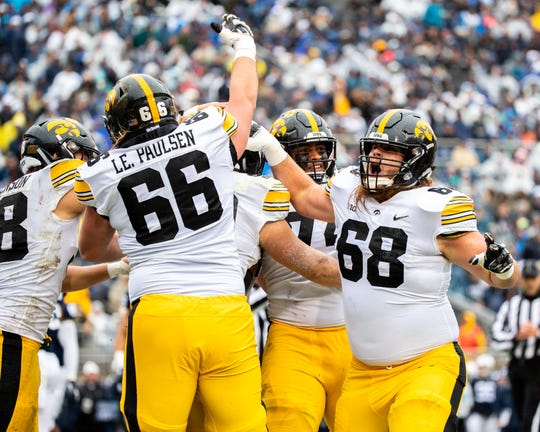 Levi (66) and Landan (68) Paulsen celebrate a fake-field goal touchdown at Penn State earlier this season. The twin brothers will be fifth-year seniors in 2019 with a shot to be starters. (Photo: Dustin Satloff)

Still early in their development (4)

Cody Ince (6-5, 260, RS fr.) — A longer-framed player who’s currently at left guard but could eventually grow into a tackle.

Jack Plumb (6-8, 250, RS fr.) — “Well beyond his years” in football intelligence, Polasek said, which is in part why Plumb was elevated to No. 2 right tackle in November and earned fourth-quarter snaps at Illinois. Now he just needs to eat, lift and bulk up. 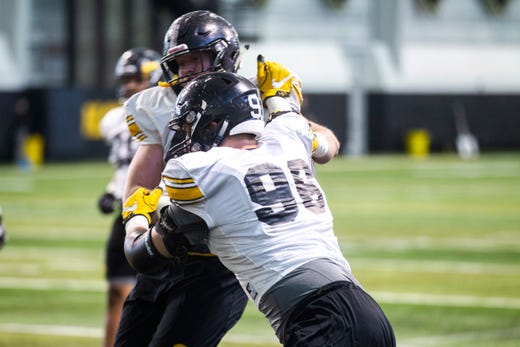 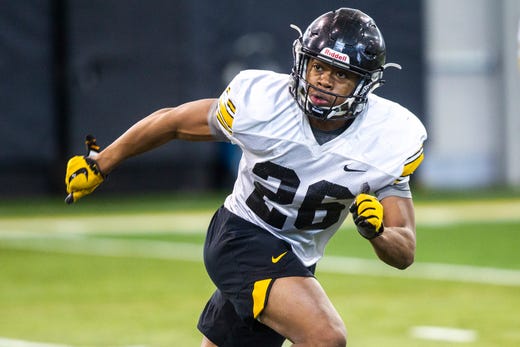 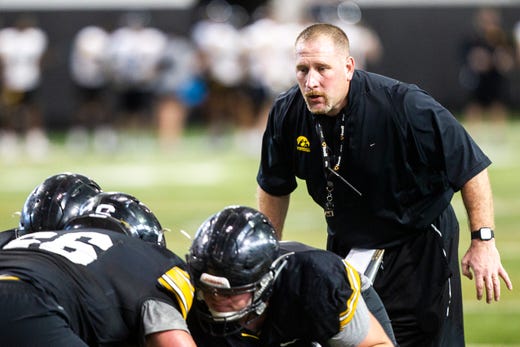 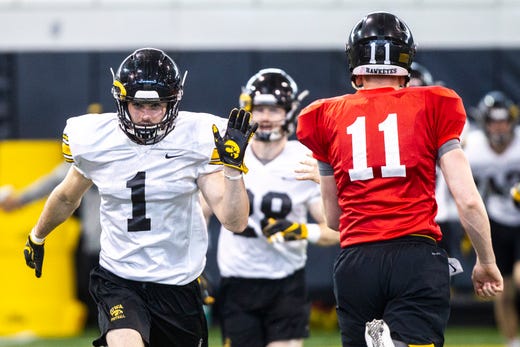 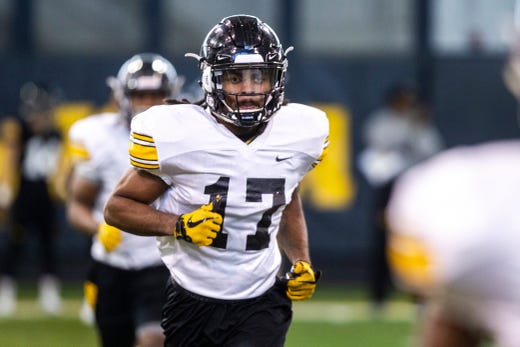 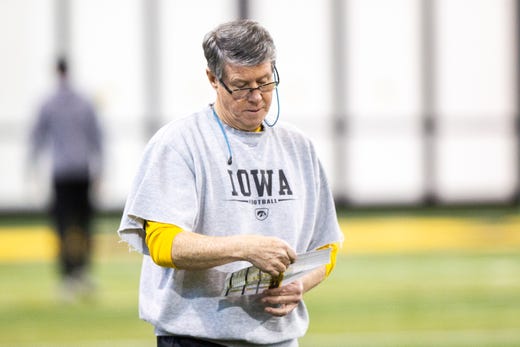 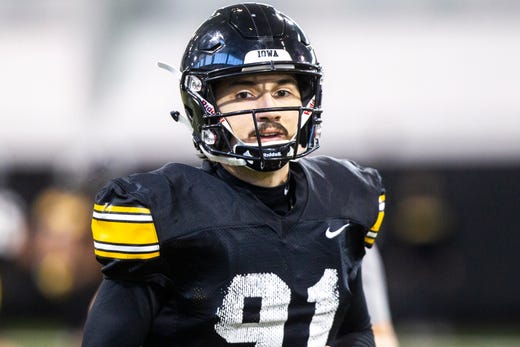 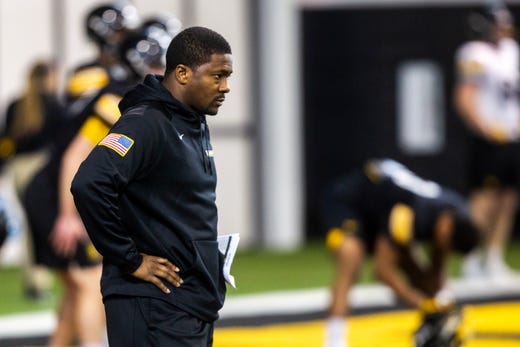 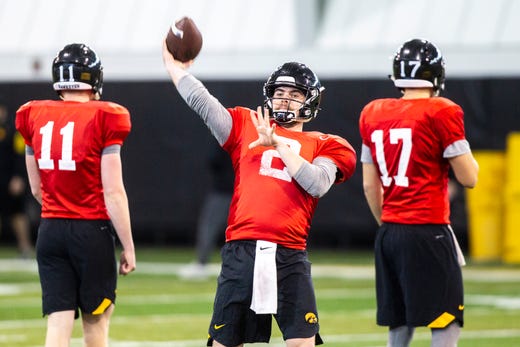 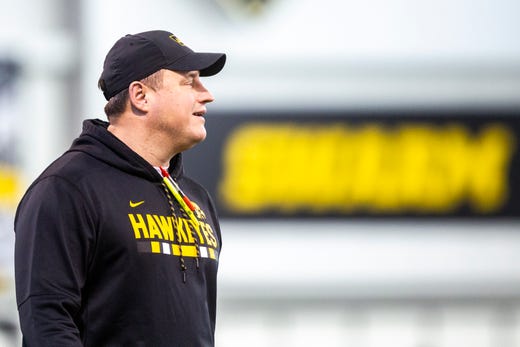 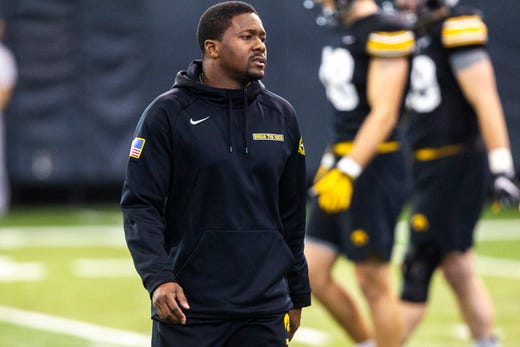 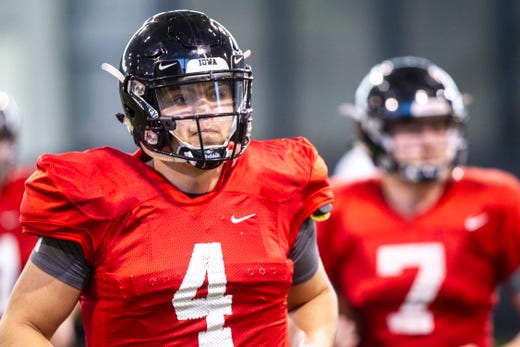 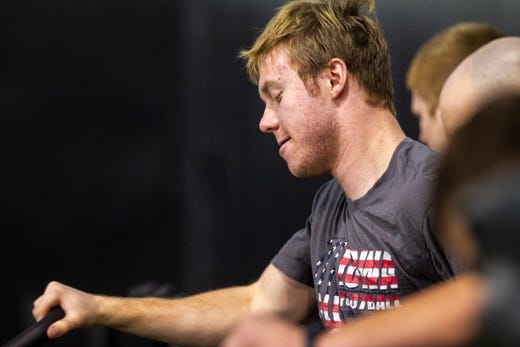 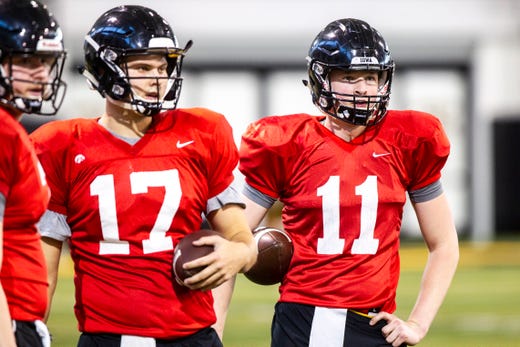 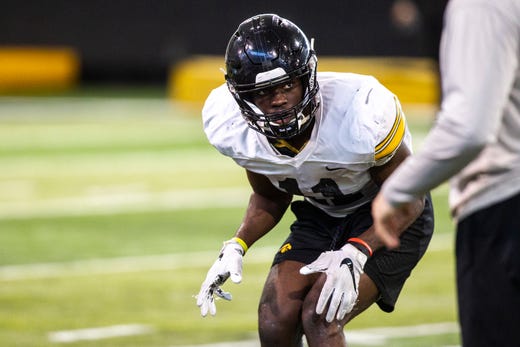 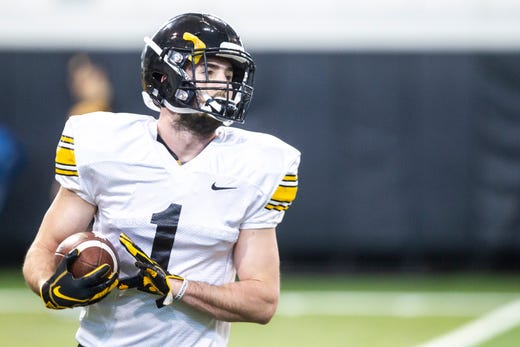 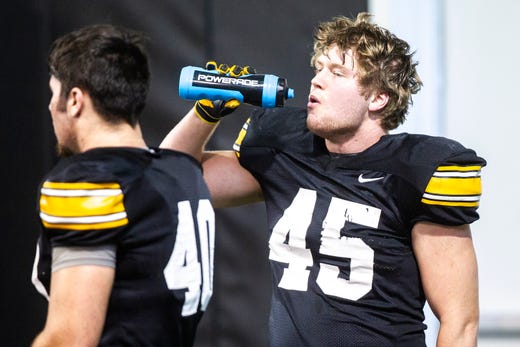 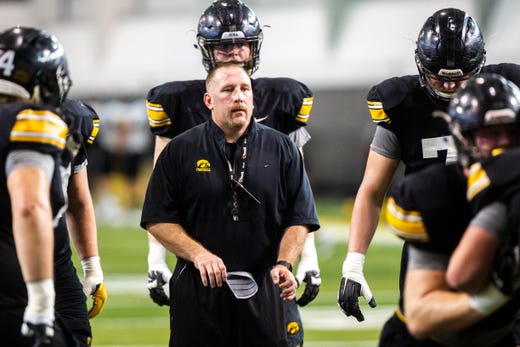 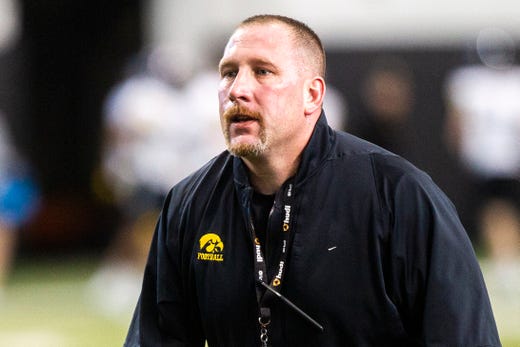 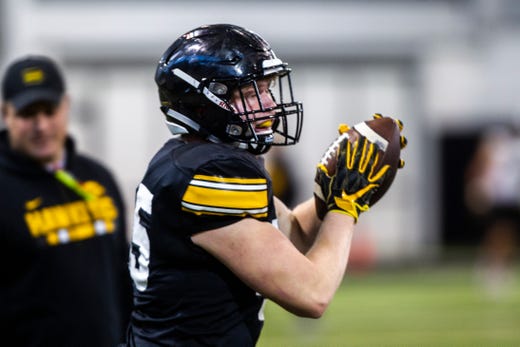 Iowa running back Ivory Kelly-Martin (21) lines up to run a drill during a NCAA football practice on Monday, Dec. 17, 2018, at the Hansen Football Performance Center in Iowa City. Joseph Cress/Iowa City Press-Citizen
Fullscreen

Austin Schulte (6-4, 275, RS jr.) — Trying to find a home, the Pella product is making the switch from defensive tackle. Probably a guard.

Tyler Linderbaum (6-2, 270, RS fr.) — Kirk Ferentz sees something special in Linderbaum, which is why the Solon native is two weeks into his position change. He’ll be exclusively a center.

Justin Britt (6-4, 290, fr.) — Rehabbing from a torn ACL and likely to redshirt. A future center whose combination of athleticism and affability is reminiscent of James Daniels.

Tyler Endres (6-6, 300, fr.) — A tremendous basketball player, too. The Norwalk product is an intriguing long-term option, presumably at tackle.

Ezra Miller (6-6, 310, fr.) — Most likely of the four true freshmen to play immediately, Miller will be groomed at tackle to take over whenever Jackson and Wirfs enter the NFL Draft.

Those are the pieces … what happens next?

Iowa’s offensive staff will use February to plot out specific plans for each of those 16 players, at least 14 of which will be spring-practice participants (Britt and Miller start classes Jan. 10). That doesn’t count five current walk-ons.

Health permitting, Iowa is rock solid at tackle with Jackson and Wirfs. Banwart should find a starting home inside. The Hawkeyes typically try to put their best five linemen on the field.

If Kallenberger, a natural tackle, rises into the top five, Polasek said he could slide to guard. That'd be similar to what Ike Boettger did occasionally in 2016 when he, Cole Croston and Boone Myers were healthy.

The lone seniors of the 16 are the Paulsen twins. How often have we seen linemen come of age as fifth-year players under Ferentz? There's a good chance the brothers could hog tie both guard positions.

Perhaps Linderbaum rises so quickly at center that Banwart is able to stay at guard.

The combinations and possibilities are endless.

There are a lot of big bodies. And a lot of competition, which is how Polasek wants it.

“If you don’t have some leap-frogging going on, I don’t know how good you can be,” he said. “Everybody that gets here early will almost certainly get a look.”