Leistikow's Outback Bowl Thoughts: How the Hawkeyes will adjust without Noah Fant

Chad Leistikow shares six thoughts from Tampa about who gets Fant's reps, the quick study of Tyler Linderbaum, the Florida heat and more.

Leistikow's Outback Bowl Thoughts: How the Hawkeyes will adjust without Noah Fant

Iowa head coach Kirk Ferentz addressed media members for about 10 minutes after a Dec. 27 practice in Tampa. Here are some of the highlights. Hawk Central 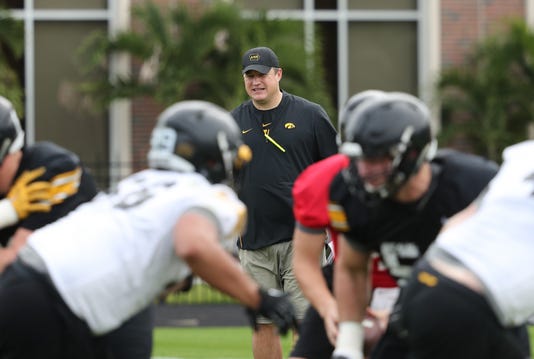 TAMPA, Fla. — Brian Ferentz meets with the media only a handful of times each year, but whenever he does, it’s usually good listening. Iowa’s opinionated offensive coordinator took questions Thursday following the Hawkeyes’ practice at the University of Tampa.

Of course, a big topic was how the 8-4 Hawkeyes will approach Tuesday’s Outback Bowl matchup against No. 18 Mississippi State (also 8-4) without all-Big Ten Conference tight end Noah Fant, who has left the team to train for the NFL.

Here are some thoughts on what Brian Ferentz, Kirk Ferentz and several offensive Hawkeye players had to say in interviews Thursday.

Look for Ihmir Smith-Marsette to be the big beneficiary of Fant’s absence.

No, the sophomore wide receiver isn’t transitioning to tight end at 6-foot-1, 175 pounds. But both Ferentzes indicated that the Hawkeyes will roll with more three-wide receiver sets instead of the typical two tight-end sets they deployed down the stretch with Fant and T.J. Hockenson.

Brian Ferentz compared the adjustment to dealing with an injured player.

“If you’re trying to run your offense through one player, you’re going to be sorry,” Brian Ferentz said. “Certainly it’s going to change some of our personnel groupings, things like that. Give some other guys an opportunity to step forward and make some plays. Really, I think it’s a positive for us.”

When Fant’s snap counts ramped up in Iowa’s final two games, Smith-Marsette’s went down. Fant played 97 snaps vs. Illinois and Nebraska to Smith-Marsette’s 29. The Hawkeyes feel pretty good about their top trio of receivers in Nick Easley (95 catches over two seasons), Brandon Smith (another emerging sophomore) and Smith-Marsette.

Nate Wieting, known more as a blocker, will join Hockenson when Iowa goes with two tight ends. And don't forget, fullback Brady Ross is back after a six-game absence too.

But upping the reps for Smith-Marsette — the Big Ten Conference’s specialist of the year because of his excellence on kickoff returns — is smart. In doing so, Iowa is subbing speed for speed the best it can.

Iowa wide receiver Brandon Smith is from Lake Cormorant, Miss., and got a late offer from the Bulldogs after he had committed to the Hawkeyes. Hawk Central

The Brandon Smith story is going to be a fun one this week.

The Lake Cormorant, Mississippi, native comes from a house divided. His father and sister went to Mississippi State. His mother went to Ole Miss. Smith would often attend the Egg Bowl. He always sided with his mother as an Ole Miss fan.

In fact, Ole Miss was his dream school, but the Rebels wanted him to play defense. Mississippi State came through with a late scholarship offer, but he already had given his commitment to Iowa.

The renowned cowbells that Mississippi State fans ring throughout games? Smith is not a fan.

“That’s another reason why me and my Mom didn’t like Mississippi State. My mom really hates those cowbells,” he said. “My sister, she’d ring it in the house to get her mad.”

Stay tuned: My colleague, Mark Emmert, will have more on Smith as we get closer to Tuesday.

In acquiring Linderbaum from Iowa’s defensive line a few weeks ago, Brian Ferentz made a comical reference to one of the most famous trades in NFL history — the one that sent Herschel Walker to the Minnnesota Vikings for a king's ransom that would eventually lead the Dallas Cowboys to three Super Bowl championships in the 1990s.

“I kind of felt like Jimmy Johnson on that one,” Ferentz said of the legendary Cowboys coach. “I don’t know what they got back, but Linderbaum was pretty good.”

That was the buzz Thursday, that Linderbaum — in his 2-3 weeks with the offense — is picking up things quickly.

“He knows more of the offense than I knew when I was that young,” said Keegan Render, Iowa’s outgoing fifth-year senior center.

He’s not going to play meaningful Outback Bowl snaps, but this already looks like a winning move. One of the top recruits in Iowa’s Class of 2018, it’s a big deal that the Hawkeyes are moving him. If it doesn’t work out, the decision will be questioned.

“That’s going to be invaluable for him. That’s spring-ball plus,” Brian Ferentz said. “It’s hard to really make those things up when you’re trying to build toward that championship level.”

Which young guys have made a bowl-prep jump?

That’s always a favorite question this time of year. And we’ll get a chance to do that with defensive coordinator Phil Parker on Friday.

Brian Ferentz’s answer mentioned freshmen wide receivers Nico Ragaini and Tyrone Tracy Jr. Both could play in this game without burning eligibility, although they won’t be a primary part of the game plan.

He also made a point to tout tight end Shaun Beyer, who is out with a knee injury, as being impressive behind the scenes. Beyer should be ready in January, Ferentz said. He'll have the best chance to replace what Fant did as a "move" tight end for the Hawkeyes — not at Fant’s level, of course, but he has unique speed and skills.

It looks promising that Iowa’s assistant-coaching staff will remain intact.

“I haven't heard anything to the contrary,” the head coach said, “unless you guys know something I don't know.”

Offensive line coach Tim Polasek was the subject of rumors that he could head back to North Dakota State or on staff at Kansas State. But both those staffs have filled up without him. Maybe we won’t even hear about it, but it wouldn’t be a surprise if some teams needing a defensive coordinator have made a run at linebackers coach Seth Wallace, one of the rising stars on Iowa’s staff.

Iowa's Mackey Award winning tight end preferred not to take NFL questions, so we asked him some college questions instead. Hawk Central

The Hawkeyes have been preparing for the heat.

Temperatures for Tuesday’s game are expected to be in the low-80s at Raymond James Stadium.

The Hawkeyes had been practicing indoors in Iowa City with the heat cranked way up to help get acclimated. Being here, though, was a little bit of an adjustment.

“We’re starting to get used to it. It’s a little different being outside. You’ve just got to get your depth perception down,” Hockenson said. “And I think I had it down at the end of practice. We’ll all be alright.”

For fans and players, the conditions will sure beat the frozen-field Pinstripe Bowl of last season. Let us never do that again.