Leistikow’s 7 thoughts off Iowa’s win at Penn State, plus the latest on Tyler Cook

Leistikow’s 7 thoughts off Iowa’s win at Penn State, plus the latest on Tyler Cook

UNIVERSITY PARK, Pa. — It had to be a happy flight home from Happy Valley for the Iowa basketball team.

And the fact that they were able to get the job done while getting rest for leading scorer Tyler Cook’s ankle was gravy.

There’s a lot of good stuff to unpack from Iowa’s triumphant trip to Pennsylvania, so let’s get to it.

1. Remember how tons of fans were melting down after Iowa’s Jan. 3 loss at Purdue?

The Hawkeyes dropped to 0-3 in Big Ten Conference play after getting blown out in West Lafayette, but they haven’t lost since. Iowa has won four straight games in Big Ten play since, and they've won nine out of 10 overall — meaning it’ll enter Sunday’s game against Illinois with just one loss 48 days.

Kriener said of Iowa winning back-to-back road games (after winning just one all of last year), “That’s getting the proverbial monkey off our back. After our last road loss, Twitter was freaking out … there was just a lot of negativity towards us. It’s nice to quiet those people.” 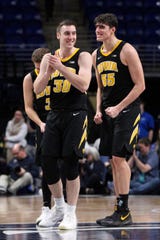 Give the Hawkeyes credit for flushing that Purdue game, which — by the way — was played without maybe the team’s most gritty player in Luka Garza. The schedule will get tougher soon, but it’s important to keep racking up wins — and avoiding any perceived “bad” losses.

2. Fran McCaffery said something that inspired Joe Wieskamp at halftime … and it worked.

The 6-foot-6 Iowa freshman was so good at Northwestern last week, but quite bad in the first half at the Bryce Jordan Center. He just wasn’t playing like he normally does. He was out of position on defense, ineffective on offense.

So, at halftime — after Wieskamp had scored zero points in 14 minutes and was a shocking minus-14 — McCaffery gave him some advice and stuck with him.

“Coach told me, you’re one of the best players on the floor. Go out there and prove that,” Wieskamp said. “That gave me a lot of confidence in the second half.”

Wieskamp finally got on the scoreboard with a steal and coast-to-coast lay-in that resulted in a three-point play, tying the score at 47. He scored all 10 of his points and was plus-11 in 17 second-half minutes. It was also his offensive rebound that created a key second chance for Jordan Bohannon to hit the dagger 3-pointer in the final minute.

“He was great,” McCaffery said. “Attacking the rim. Rebounding the ball defensively. He was special, as he usually is.”

3. But while McCaffery stuck with Wieskamp, he let Isaiah Moss sit.

In a lousy first 20 minutes, Moss was one of Iowa’s few bright spots. He hit all four 3-pointers he attempted, including three in a span of 50 seconds that put Iowa ahead, 29-20.

But he finished the game with that same 4-for-4 line from deep — in part because he hardly saw the floor in the second half. McCaffery took him out with 15:58 remaining and Iowa trailing, 56-52. Moss didn’t return until the final seconds.

It was partially an oversight and partially a coach’s decision. The ninth-year Iowa coach said he liked that the group of Bohannon, Connor McCaffery, Wieskamp, Kriener and Luka Garza. Those five were on the floor when Iowa turned a 68-60 deficit into a 79-72 lead.

Still ... Moss is a good shooter and capable defender who could've at least given one of his guard teammates a breather.

Connor McCaffery scored three points with two assists in 25 minutes, but was plus-9 for the game to Moss’ minus-9.

“We had that team that went on that (19-4) run, and I kind of stuck with that group,” Fran McCaffery said. “In fairness to (Moss), I probably should have gone back to him at some point. Because he bailed us out in the first half.”

4. There was another telling quote from Kriener that pointed to why Iowa won.

McCaffery made two notable strategy changes in the second half. He got away from a man-to-man defense that wasn’t working. And his Hawkeyes went from airing it out from 3-point range (27 of their first 29 points were from long range) to pounding the ball inside.

Penn State (7-11, 0-7) has a good starting five, but isn’t deep. So Iowa wanted to push the pace and wear down the Nittany Lions.

Kriener remembers one point in the second half where he knew Iowa’s running game was working.

“We were on defense, I went to box out Mike Watkins (11 points, 11 rebounds), and he’s usually a tenacious rebounder,” Kriener said. “I could hear him breathing heavy. I was like, ‘Alright, let’s run these guys now.’”

The Hawkeyes wound up scoring 89 points, a program record for a game at Penn State, against a team that entered No. 20 nationally in defensive efficiency. The Nittany Lions hadn’t given up more than 71 in any previous Big Ten game.

Stevens, who was averaging 18.6 points a game, was held to a season-low eight on 4-for-18 shooting. The rest of the Nittany Lions were a combined 26-for-46, though, so it’s not like Iowa had a great defensive night. And McCaffery acknowledged that.

“He did miss some shots he normally would make,” McCaffery said.

Did you see what the Illini did Wednesday night? They took three-loss Minnesota to the woodshed, 95-68. They led by as many as 36 in Champaign.

It was a reminder that there are no gimmes in the Big Ten and that a sleepy performance will be punished.

7. That brings us to Tyler Cook. Will he play against Illinois?

Reading the McCaffery tea leaves, I think he has a good chance to give it a go Sunday (Noon, Big Ten Network).

"The thing with sprained ankles, you can run but you can’t cut. He had no explosion," McCaffery said. "To his credit, I think he realized he really wouldn’t have helped us if he was out there laboring. And he’s going to be diligent, as he has been, so he can get ready for Sunday.”

Even if Cook can provide 10 effective minutes Sunday, like Garza did in a home win against Nebraska after his ankle injury, it'd be a help.