Leistikow's Signing Day thoughts: It's OK to be excited about the Hawkeyes' new punter

Leistikow's Signing Day thoughts: It's OK to be excited about the Hawkeyes' new punter

IOWA CITY, Ia. — It was amusing but also telling that a large chunk of Kirk Ferentz’s National Signing Day press conference had to do with the shiny new toy set to arrive in Iowa City: the punter.

Yes, there were six punting questions in all that covered nearly 20 percent of the Iowa head coach’s 35 minutes at the lectern. There’s significant anticipation already in what Michael Sleep-Dalton can bring to Iowa’s punting game in 2019.

“We’re all really excited about what we think he can add to our football team,” Ferentz said of the graduate transfer from Arizona State, who was among three new scholarship Hawkeyes to sign their letter of intent Wednesday — bringing Iowa’s Class of 2019 to 23. 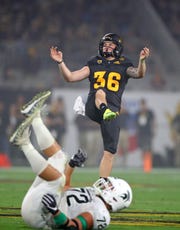 If you’re wary, as Ferentz is about diving into the NCAA’s transfer portal, punter seems like the safest bet. Ferentz, after all, found a success story in taking on Ron Coluzzi as a graduate transfer prior to the 2016 season. Although Coluzzi’s numbers weren’t ground-breaking, he had a penchant for delivering clutch kicks and provided stability in a key part of Iowa’s formula to success — field position and defense — while also becoming a special-teams captain.

“Ron came in and did a great job,” Ferentz said. “That’ll be Michael’s job, to come in here and, first of all, adapt to everything here and then go out and compete and do it in a way that everybody can respect.”

Pinning an opponent back inside its 10-yard line was something Ferentz personally observed as a huge story in the New England Patriots’ 13-3 Super Bowl win against the Los Angeles Rams. New England punter Ryan Allen buried the Rams inside their own 10 three times in that game.

Sleep-Dalton dropped 19 punts inside the opponents’ 20 while also kicking 10 balls over 50 yards. Iowa’s punting game, meanwhile, has been largely abysmal over the course of the last two years.

“Averages are one thing and all that. What really tells you the picture, you factor in hang time, directional punting, all those types of things we ask our punters to do,” said Ferentz, who was in Atlanta to see his son James, an offensive lineman for the Patriots. "… Sunday night’s a great example. (Allen’s) plus-50 punting, that’s a big, big part of being a successful football team.

“Those are little things that don’t always show up in the stat column.”

MORE:Here's who else Kirk Ferentz was celebrating with at the Super Bowl

Ferentz certainly wasn’t ready to hand the job to Sleep-Dalton, who won’t arrive until June. The spring reps will go to senior Colten Rastetter, who averaged 38.9 yards last season, and sophomore Ryan Gersonde.

But safe to say, if Sleep-Dalton pans out, he’ll help Iowa gain several first downs' worth of field position every game in 2019.

Punter wasn’t the only new signee worth talking about.

The first high school prospect to sign with Iowa on Wednesday was Chicago defensive back Jermari Harris.

Iowa’s radar was especially pointed, Ferentz noted, after Amani Hooker’s decision to leave early for the NFL Draft. Hooker was the Big Ten Conference’s defensive back of the year after perfectly becoming a hybrid of safety, cornerback and linebacker in Phil Parker’s new-ish 4-2-5 defense.

“With Amani coming out, we decided that was an area we would take another scholarship player, if we had the right guy,” Ferentz said of Harris, who is listed at 6-foot-1 and 175 pounds. “And it really got down to about three or four guys.”

Look for Iowa to deploy either Michael Ojemudia, Matt Hankins or D.J. Johnson in that “Cash” slot-corner/outside linebacker role that Hooker perfected in 2019. But put Harris on the radar for future years.

Give credit to Derrick Foster for a productive first year of recruiting on Iowa’s staff.

Foster, Iowa’s first-year running backs coach, was the primary recruiter on four of the Hawkeyes’ 23 incoming scholarship players — and he helped the program go into new territories to land those guys.

McCall signed with Iowa on Wednesday in a late decision over offers from Navy and Army.

“The fact that he was on their recruiting list said a lot to us about a lot of things,” Ferentz said. “He’s a player who we think has his best football in front of him. Then it really gets down to the player’s attitude, what he does with the opportunity when he gets here.”

Iowa wound up landing five players in this class from the South — three from Florida (with Kelton Copeland leading the way on linebacker Yahweh Jeudy), one from Alabama and one from Georgia, in addition to its usual Midwest haul.

Recruiting is certainly changing, and Ferentz is wary of everything going on.

He certainly doesn’t like the transfer portal for the reason that players at the first sign of adversity will be more inclined to look elsewhere; Ferentz’s staff tries to teach its players the opposite lesson: To stick with things when the going gets tough.

But more alarming, he said, is that the transfer market becoming closer to a free-agent system opens the door to third parties getting involved.

“I’m not sure that’s healthy for anybody,” Ferentz said.

It was also new that this February signing day had almost no drama. The third Wednesday in December is the new king of recruiting days, although Ferentz would still like to see that date moved up further to the summer.

Lastly, he was kind of amazed that he could talk about six early-enrolled true freshmen already on campus. Offensive linemen Justin Britt and Ezra Miller, quarterback Alex Padilla, linebacker Jestin Jacobs, defensive back Daraun McKinney and Byrd are all several weeks into their Hawkeye careers.

“How about that, yeah? Actually, seven with Willie (O’Hara),” Ferentz said, including the walk-on linebacker from Iowa Western Community College. “All seven of the guys are doing really well.

“It’s all worked out beautifully. They all seem like they’ve taken to it really well.”