From his freshman year to now, the list of big-game moments and big-time shots continue to grow for the Hawkeye junior guard from Marion.

Jordan Bohannon, who hit the game-winning 3 against Northwestern, was profiled in the BTN Journey episode later Sunday night. Hawk Central

What makes that little-known fact more jarring is that when Bohannon checked into that Nov. 11, 2016, game against Kennesaw State, the Hawkeyes were on defense.

Safe to say, Bohannon has been a fearless shooter from Day 1 of his Division I career, now nearly three seasons deep. It’s that fearlessness, combined with a reliable 3-point range that surpasses 25 feet, that has already helped him become one of the most clutch players to wear a Hawkeye jersey. 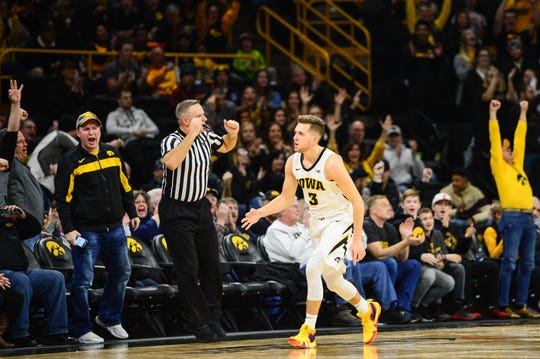 "Jordan Bohannon for 3" has happened 239 times in the Iowa junior's sharpshooting career to date. That ties him for second all time at Iowa with Matt Gatens, and he's just 23 behind Jeff Horner's school-record 262 3-pointers. (Photo: Jeffrey Becker USA TODAY Sports)

“Ice in my veins, right?” Bohannon joked Sunday after the most cold-blooded shot of his Iowa career, an off-balance 3-pointer with 0.6 seconds left that gave the Hawkeyes an 80-79 win against Northwestern.

This week, I examined just how clutch Bohannon has been at Iowa. I dug into each of Bohannon’s 91 games and 239 career 3-pointers at Iowa (just 23 short of Jeff Horner’s school-record 262 and nearly on pace to track down the Big Ten Conference record 374 of Ohio State’s Jon Diebler), and I extracted a pile of interesting data.

Safe to say, my original hypothesis of Bohannon being Iowa's Captain Clutch was (unsurprisingly) proven true. I even talked to him before Wednesday's practice to gather his favorite moments.

OK, anytime someone asks "Who do you want taking the last shot?" the only appropriate answer is @IowaHoops' @JordanBo_3. pic.twitter.com/fmUMBRRh5O

The 6-foot Linn-Mar product came off the bench for the first six games of his Hawkeye career and was a pedestrian 8-for-27 from long range. Bohannon told me Wednesday that few people know he actually cut his right (shooting) hand just before the season and had nine stitches sewn between his pinkie and ring fingers.

"I honestly had to change my shot those first couple games," he admitted.

Then came his first start, a trip to Notre Dame for the Big Ten/ACC Challenge.

As if to assert himself on the collegiate stage, Bohannon let nine 3-pointers fly in the first half alone — he made four and dished out four assists — to keep the Hawkeyes competitive. Although Iowa lost the game, Bohannon in one night went from bench role player to prominent point guard with a 23-point, seven-assist performance that included 7-for-15 shooting from 3.

"Once my finger healed up, I just came out and was able to fire away," Bohannon said. "Notre Dame, I just felt really comfortable that game."

He has started every Iowa game (85 and counting) since.

Overtime (or forcing it) is Bohannon’s time.

Six of his 3s have come in overtime, including five as a freshman. (Note: Iowa has yet to play an overtime game this season.)

The biggest shot of Bohannon's sophomore season was a 3 to send Iowa to overtime against Michigan at the Big Ten conference tournament. In what ranks among his deepest 3-point makes at Iowa, Bohannon pulled up with Iowa down 67-64 and its season on the line. From just left of the key, he buried a stone-cold swish with 16 seconds left under the bright lights of Madison Square Garden.

Iowa would lose to the eventual national runner-up, but Bohannon’s penchant for big-game moments was not lost in a disappointing 14-19 season.

“I just kind of thrive in a bigger environment," said Bohannon, the youngest of four brothers to play Division I basketball. "Growing up, just envisioning myself hitting shots in big-time arenas, I think that’s just what I've fed off of since I got here."

When key scorers are down (or even out), Bohannon steps up.

As a freshman, first-team all-Big Ten guard Peter Jok missed a pair of games with a back injury. No problem, as Bohannon stepped in to combine for 9-for-17 shooting from 3 at home against Ohio State and then at Rutgers. Iowa won both games.

Hawkeyes Hang On! Jordan Bohannon and his 19 second half points lead #20 Iowa to a 77-72 win vs Indiana. Impressive road win against an energized Hoosier squad.

When the games matter the most, Bohannon’s numbers explode.

In my opinion, Bohannon’s best wire-to-wire performance in three years occurred at nationally ranked Maryland on Feb. 25, 2017. Needing to win out for an NCAA Tournament shot, Bohannon canned eight 3-pointers — going 4-for-5 in each half, each one seemingly deeper than the last — on his way to a then-career-high 24 points in an 83-69 win.

And in five postseason games, he’s been borderline heroic.

Just think what might be possible once he plays for the first time in the NCAA Tournament.

And finally … time to rank Bohannon’s most important shots at Iowa. (He and I agree on No. 1.)

No. 3: At Penn State, last month. Iowa was clinging to a one-point lead in the final minute. Run the shot clock down? Nah. Bohannon, from 26 feet ... swish, with 36 seconds to go in an 89-82 win. Bohannon told me he can shoot without losing his form about a step inside the half-court line.

“It’s funny, because I don’t even realize how far I’m shooting on the court," he said. "It’s just a rhythm shot for me, which is kind of crazy to say because of how far it looks to people."

IN THE GYM RANGE ❄️ 👌🏻 @JordanBo_3pic.twitter.com/ZZ1Yr0t5cq

No. 2: The Northwestern game-winner on Sunday. Bohannon scored all 15 of his points in the final 5:28 after Iowa had fallen behind 67-54. Again, clutch when it counts ... to the very last second.

No. 1: At Wisconsin on March 2, 2017. Having grown up following Wisconsin basketball, where brothers Jason and Zach played, Bohannon wasn't offered a scholarship by the Badgers. So in his first (and so far only) game at the Kohl Center, the ball came Bohannon's way with Iowa trailing 57-56 and fewer than 10 seconds remaining.

From the left wing, Bohannon buried a 3-pointer to give Iowa the 59-57 win — pausing briefly to hold his follow-through before retreating on defense to help get the final defensive stop.

"Just because of the history of Wisconsin and my brothers playing there," Bohannon said, "that was the most memorable one."