But “Dolph” also knows as much as anyone that words matter.

Especially when communicating effectively and appropriately is your primary job.

And as a result of his latest on-air mistake, Dolphin — the Hawkeyes’ play-by-play radio voice for football and men’s basketball for 22 years — has been suspended “indefinitely” (including the rest of the basketball season), according to Learfield Sports Properties. The University of Iowa said it supports the suspension.

The exchange between Dolphin and Bobby Hansen certainly didn’t come across as mean-spirited toward star center Bruno Fernando. 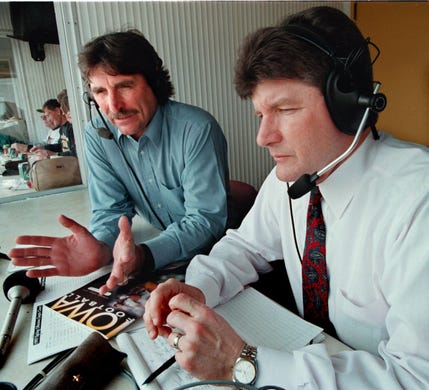 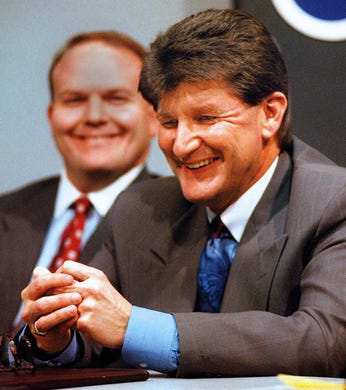 From 1996: Gary Dolphin of Dubuque was named play-by-play radio announcer for University of Iowa football and men's basketball games Friday. Behind him is Roger Gardner, vice president of Learfield Communications, which owns the games' broadcast rights. Register file photo
Fullscreen 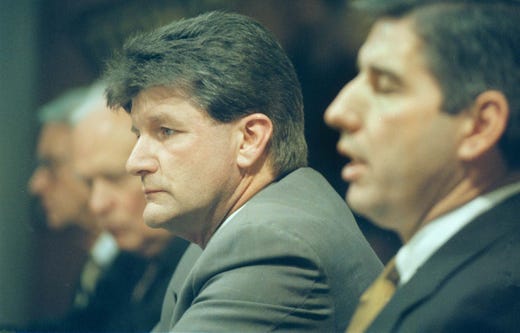 From 1996: Gary Dolphin listens as University of Iowa Athletic Director Bob Bowlsby, right, responds to a question during a news conference after Dolphin was named the new radio play-by-play announcer for the university and Learfield Communications, Inc. In background are Jim Zabel (left) and Bob Brooks. Register file photo
Fullscreen 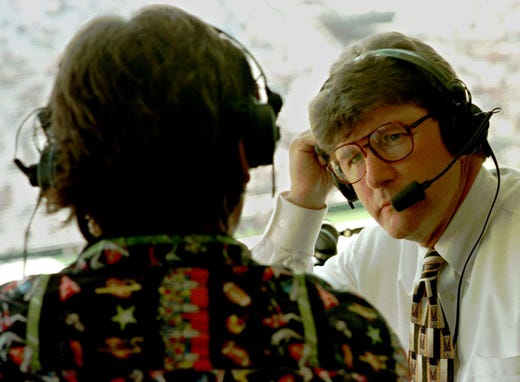 From 1997: Gary Dolphin listens to color commentator Ed Podolak during Dolphin's first game as the exclusive radio voice of Iowa football. "I'm pretty well drained," he said after calling Iowa's 66-0 rout of Northern Iowa. "I'm ecstatic to get the first one out of the way." Register file photo
Fullscreen 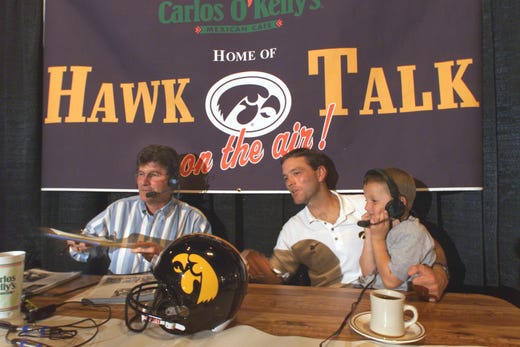 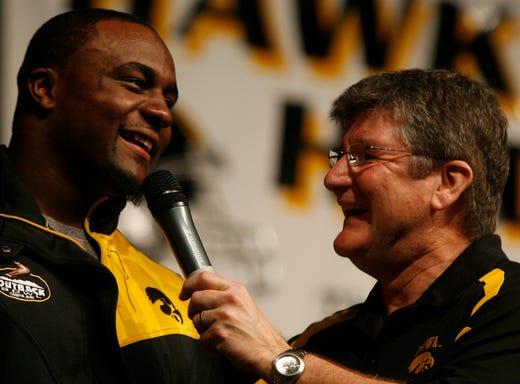 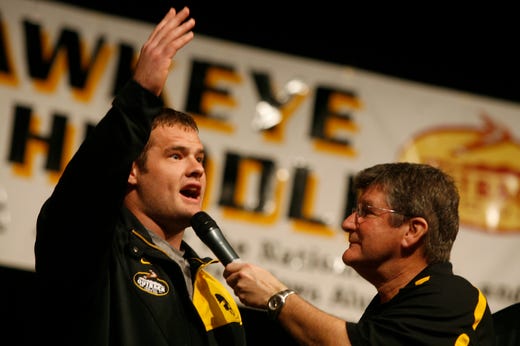 From 2008: Iowa's Matt Kroul thanks the fans while talking with Gary Dolphin during the Hawkeye Huddle in Tampa, Fla. Register file photo
Fullscreen 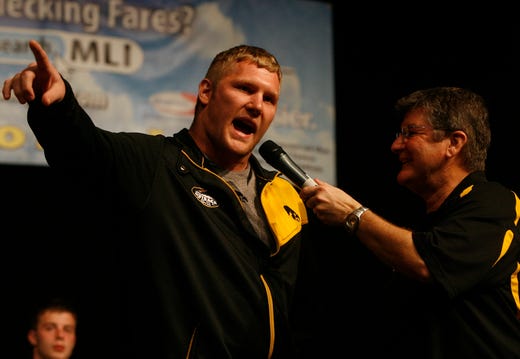 From 1997: Jim Zabel was in an unfamiliar position as an observer at Kinnick Stadium. At left is his replacement, Gary Dolphin, and analyst Ed Podolak. Register file photo
Fullscreen 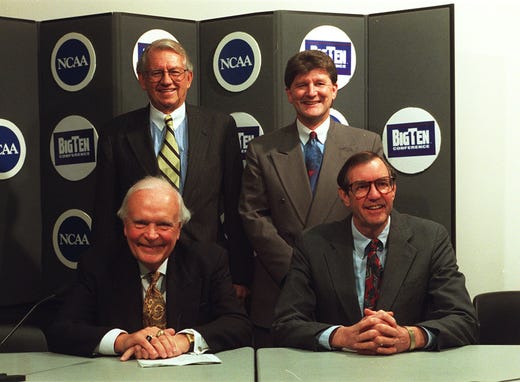 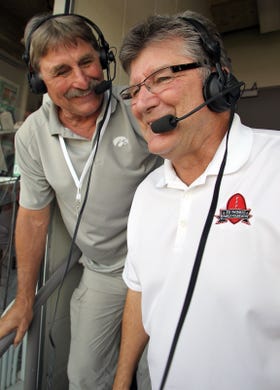 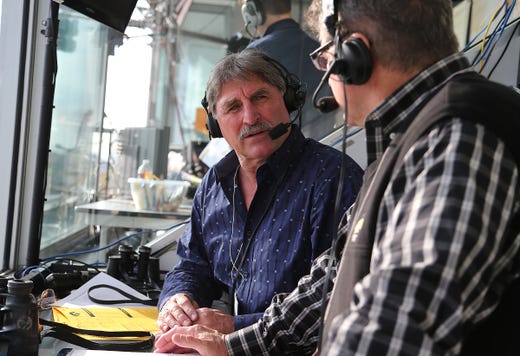 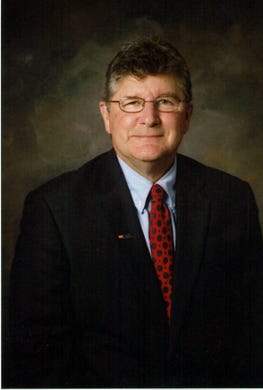 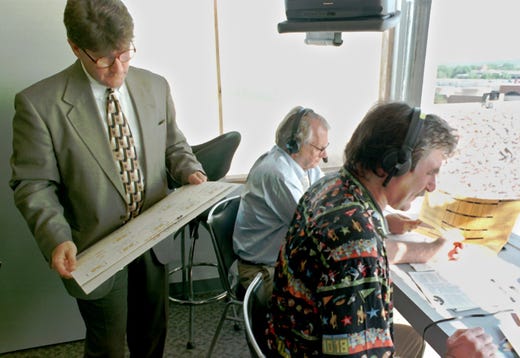 From 1997: It was Jim Zabel, background, who asked Ed Podolak, left, to become a commentator for Iowa football in 1982. Register file photo
Fullscreen 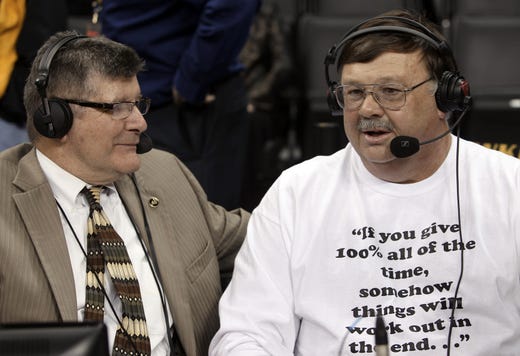 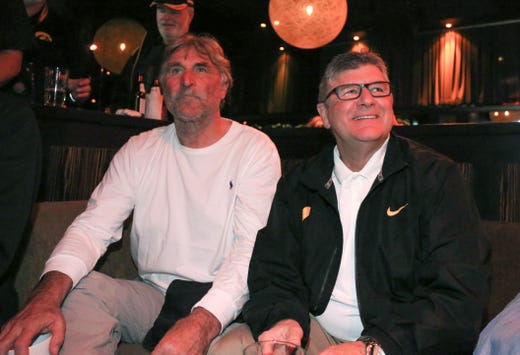 From 2015: Iowa Hawkeye broadcasters Ed Podolak, left, and Gary Dolphin watch the Iowa men's basketball team extend a lead against Michigan State from a watch party on Dec. 29, 2015, at Lucky Strike Live in Los Angeles. The Hawkeyes football team was days away from playing in the Rose Bowl, against Stanford, in Pasadena. Register file photo
Fullscreen 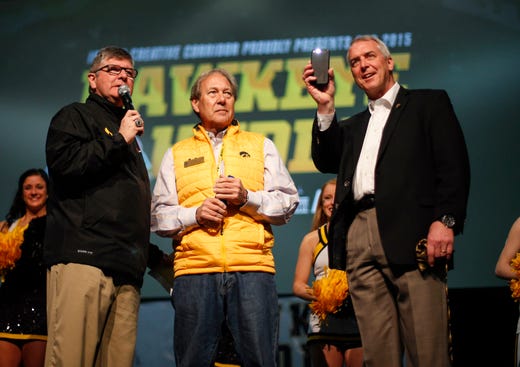 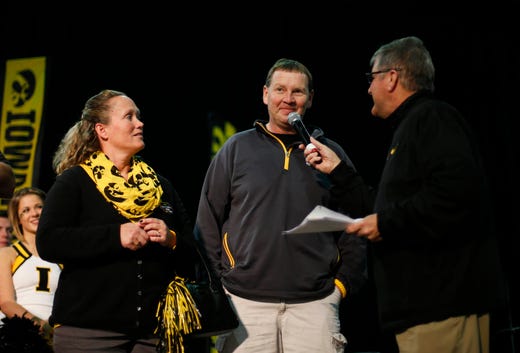 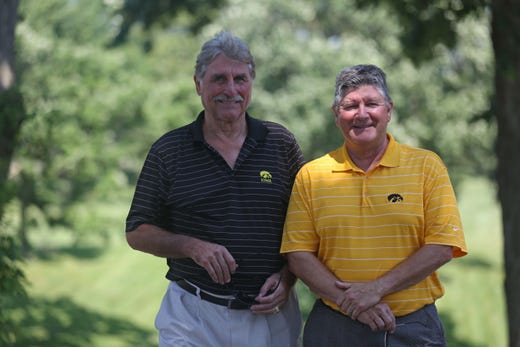 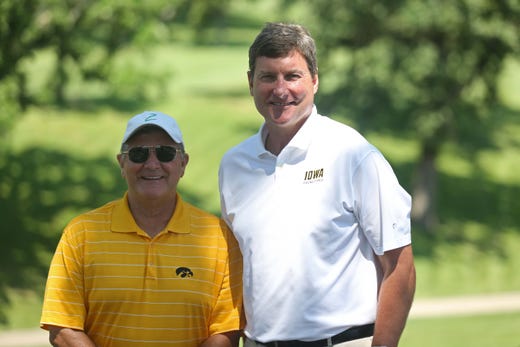 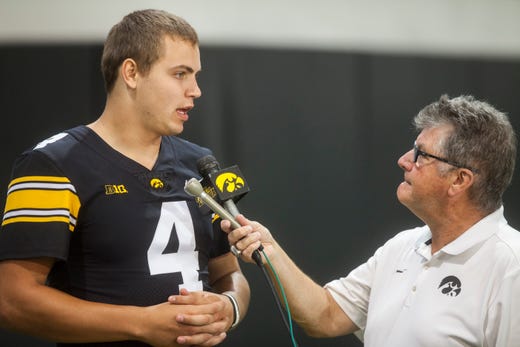 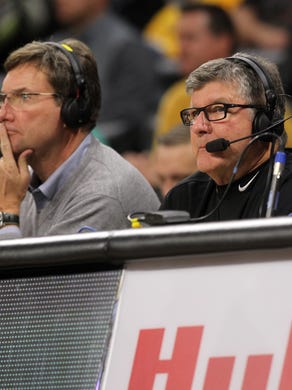 An illustration of Hawkeye football radio announcers Ed Podolak and Gary Dolphin as they enter their 20th season in the booth together. Mark Marturello, The Register
Fullscreen

“Twelve (Maryland) 3s on 22 made baskets. That’s some pretty good long-range shooting,” Dolphin said, recapping Tuesday's 66-65 Iowa loss. “And then Fernando was King Kong at the end of the game.”

Hansen replied in agreement, “Yeah, he was” — then went on to rave about 6-foot-11 Fernando’s rebounding prowess. It was his tip-in shot with 7.8 seconds that lifted Maryland to the one-point win in a feverish finish at Carver-Hawkeye Arena.

More than 48 hours passed between the comment and Friday afternoon’s announcement of the disciplinary action.

So, this wasn’t an instant national firestorm. In fact, most of us would have never heard the clip had the harsh discipline not been handed down. But obviously, comparing a black player — even if it was completely ignorant — to a gorilla is inappropriate. When Howard Cosell called a black running back in the 1970s "a little monkey," it was inappropriate.

You may not be offended by the comments. But it doesn't mean others aren't.

And "inappropriate" is the exact word Learfield, which owns the rights to Hawkeye broadcasts, used to describe Dolphin’s remark.

It’s dangerous for any of us to try to definitively say what’s inside someone else’s heart.

But I will say this: Knowing Dolphin on both a personal and professional level, I believe him to be a good-hearted, kind, giving man who has dedicated more than two decades of his life to promoting the good in Hawkeye sports.

But the reality is, this was his second careless on-air remark about a player this basketball season. The dust had barely settled from the two-game suspension Dolphin was dealt after his negative comments about Iowa's recruiting and the ability of backup guard Maishe Dailey aired during a Nov. 27 game against Pittsburgh.

Dolphin, in a statement Friday, said he would use the time away from the mic “as an opportunity to grow as a person and learn more about unconscious bias.”

I think if the Dailey comments hadn’t happened, all parties would have agreed that this “King Kong” incident was worth a sincere apology and maybe a short suspension.

Given this was Dolphin’s second strike in a few months, though, there’s no doubt he’ll have to regain a lot of trust — from athletics director Gary Barta, coach Fran McCaffery and athletes — if he’s going to call another basketball game at Iowa.

It’s my understanding that Dolphin will be back behind the mic for football season. But the “indefinitely” part certainly leaves Learfield and the university some wiggle room if they choose to go another direction.

I tried to reach out to Dolphin for this column, and at the time of publication he hadn’t gotten back to me. So I don’t know where he stands on his future, but I can tell you he loves the Hawkeyes to death.

From my seat, Iowa would do well to keep Dolphin on a path to calling football games in the fall, as usual, with Ed Podolak. And I think both parties, at this point, would be best served to go their separate ways in basketball.