Leistikow's thoughts: Hawkeyes need to play 'angry' at Wisconsin; what about hack-a-Happ?

Columnist Chad Leistikow takes a look at 6 angles facing the Hawkeyes as they head into the final week of the regular season.

Leistikow's thoughts: Hawkeyes need to play 'angry' at Wisconsin; what about hack-a-Happ?

IOWA CITY, Ia. — It’s time for the Iowa basketball team to go back on offense, in more ways than one.

Upping the shooting percentages is obviously on the wish list, considering the Hawkeyes have been uncharacteristically cold from 3-point range over the past four games — hitting just 29 of 99, or 29.3 percent.

But the Hawkeyes (21-8 overall, 10-8 in the Big Ten Conference) know they need to bring an aggressive mentality into the final week of their regular season after last week’s humbling losses by a combined 34 points to Ohio State and Rutgers.

“You’ve just got to play almost with that kind of anger — with reckless abandon — in how hard you play,” sophomore center Luka Garza said Tuesday. “I think we’ve got to get back to that. A lot of the teams that we played last week were … desperate to try to get us. We’ve got to match that mentality.” 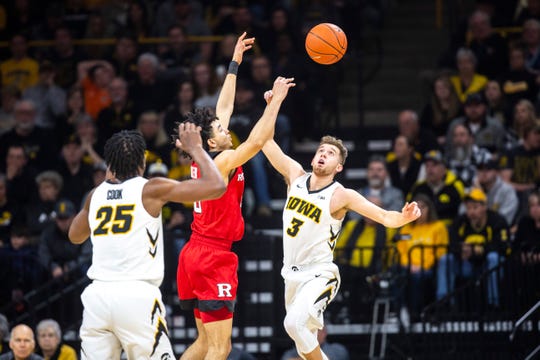 Iowa's offense has been choppy of late (Jordan Bohannon, right, has his shot blocked by Geo Baker) but Hawkeye players know they need to get more aggressive on both ends of the floor. (Photo: Joseph Cress/Iowa City Press-Citizen)

During last year’s disastrous 14-19 season and even much of this one, the Hawkeyes were unaccustomed to wearing a bull's eye. But that seemed to change after they dismantled No. 5 Michigan, 74-59, on Feb. 1.

Since then, the Hawkeyes have played six games — five as favorites. They haven’t looked like the same team. They’ve been getting opponents’ best shots — much like Iowa gave its best shot to Michigan — and they’re coming up short.

“Sometimes, you’ve got to go through it to know how to handle it,” junior forward Ryan Kriener said. “Maybe that’s what these past two games were — a little bit of a wake-up call for what you have to be prepared for, when it’s a Super Bowl-type game for the other team.”

"The past few games our guards have been getting mugged, and nothing's been done about it," the Iowa center says. Hawk Central

So now … the Hawkeyes return to playing as the underdog again.

Maybe that’s just the thing they need to get their mojo back. They seem to play better with a chip on their shoulder. And certainly, there are doubters among their own fan base now. Expect Iowa to be roughly an eight-point underdog for Thursday’s 6 p.m. game at No. 21 Wisconsin.

One of the things that fueled Iowa to the program’s first unbeaten non-conference campaign (11-0) in 32 years was the ability to seize early leads — and build on them. The Hawkeyes did a great job taking the fight to Oregon, Connecticut, Iowa State and, of course, Michigan.

Lately, even in the games they’ve won, they’ve had a bad habit of playing from behind.

“All I want to see is more consistent play,” suspended coach Fran McCaffery said Tuesday. “You look at Saturday (against Rutgers) and say, boy, it wasn't very good.”

Iowa coach Fran McCaffery discusses how he'll address Game 2 of his suspension, and what it was like to watch the Rutgers game from his office. Hawk Central

McCaffery’s absence against Rutgers shouldn’t be dismissed as a minor deal.

And the same will be true at Wisconsin. McCaffery will travel to Madison, but he won’t be in the Kohl Center as he serves out the second half of a two-game suspension for his vulgar tirade toward an official following the Ohio State loss.

“He’s obviously our leader. He’s a voice that we always hear in the locker room, in the timeouts,” Garza said. “Regardless, I think Coach has prepared us for moments like this when we’re without him.”

Ninth-year assistant coach Kirk Speraw will fill the head role at Wisconsin, as Andrew Francis did against Rutgers.

“Coach Francis did an excellent job," Garza said. "I think it was just us players weren’t executing the level that we can."

Basketball players are creatures of habit. When the routine gets out of sorts, sometimes it’s hard to discover a rhythm in a highly competitive situation where there's not much of an adjustment period. It’ll be interesting to see how the Hawkeyes respond to Speraw on Thursday in one of the Big Ten Conference’s toughest environments.

McCaffery will return for Sunday’s regular-season finale at Nebraska.

Iowa guard Jordan Bohannon says he hasn't seen a change in how opponents are defending the 3-point arc. How does he account for a shooting slump? Hawk Central

Even though he was seen feverishly rubbing his hip during the Rutgers game, the Hawkeyes’ point guard and one of the team leaders played coy about a possible injury Tuesday.

“What hip?” he grinned. “I don’t have anything hurt. What are you talking about? Everything’s great.”

McCaffery said there are nicks throughout the team. Hopefully for the Hawkeyes, Bohannon truly is fine. Iowa certainly could use its most clutch player in March, fully dispatched.

After playing a team-high 33 minutes Saturday, freshman Joe Wieskamp got a massage Monday.

Just part of the process of trying to stay loose and fresh over the course of the regular-season grind.

“It’s taken a little toll. The coaches and training staff have done a great job trying to get me refocused, recharged,” Wieskamp said, “because we know this is a big part of the year.”

Wieskamp remains one of Iowa’s best shooters, rebounders and defenders. But Thursday will mark his 30th game of the season. The stats would suggest he’s feeling tired legs — with four games scoring in single digits in Iowa’s last five. 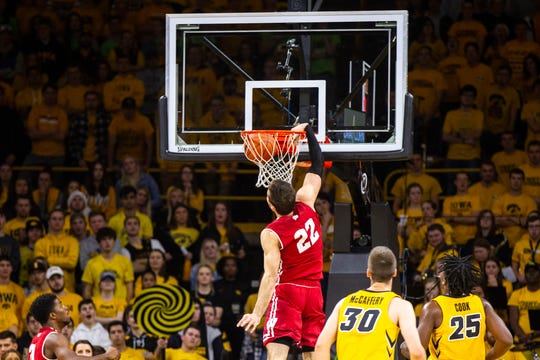 Iowa would be happy to ruin Ethan Happ’s Senior Day.

But slowing the potential Big Ten player of the year won’t be easy.

“He’s probably the toughest (big) guy to guard in the Big Ten,” Kriener said. “Because he has a little bit of an unorthodox game for a big guy, where he’s constantly spinning, dribbling. Such a gifted passer. Really crafty finisher. He’s really smart, defensively.”

Deploying a “hack-a-Happ” strategy of intentionally fouling him doesn’t seem like Iowa’s style. Plus, the Hawkeyes don’t have a ton of frontcourt depth with Cordell Pemsl (knee) out for the year and Jack Nunge red-shirting. But...

For an Iowa team that’s been reeling on defense, it might be worth trying. Put walk-on Riley Till out there to use up five fouls if need be, and make Happ beat you by 1s from 15 feet ... not from under the hoop with 2s or via kick-out assists for 3s.

“I haven't really thought about that,” McCaffery said. “You've got to recognize that he's one of the better players in our league and he's going to have the ball a lot, so you have the opportunity to foul him if you want to.”