Leistikow: The best Reese Morgan story? All the lives he's impacted as a football coach.

Leistikow: The best Reese Morgan story? All the lives he's impacted as a football coach.

It was the winter of 2001, and Reese Morgan was speeding in his rental car down a South Dakota highway. He needed to see a high school football prospect, but he was running late.

Then, the red-and-blue lights showed up in his rear-view mirror. He knew he was deservedly busted.

The officer noticed Morgan was dressed in Iowa football clothing and, intrigued, asked why he was in such a hurry.

“Who are you recruiting?”

“I don’t know if you’d know him. His name’s Chad Greenway.” 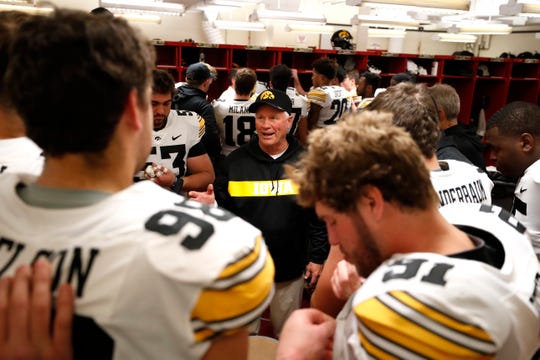 Reese Morgan, shown inside the locker room at Indiana this past season, spent his final 19 years of coaching with the Iowa football program. (Photo: Photo courtesy of Brian Ray, Hawkeyesports.com)

The officer not only provided Morgan a high-speed escort into Mitchell, South Dakota, where Greenway would be playing a basketball game that night, but he also led him to the back door of The Corn Palace — where someone was waiting to direct Morgan to a seat next to Greenway’s family.

The rest, of course, is history.

Morgan not only found Greenway, who played nine-man football, in a South Dakota outpost. He brought him to Iowa, where Greenway would become a Hawkeye linebacker legend, a first-round NFL draft pick and a longtime fixture with the Minnesota Vikings.

Talk to anyone who knows Reese Morgan, and there’s always a story.

And today, the story is a big one.

Morgan has decided to walk away from a legendary coaching career. Retiring, a few months shy of his 69th birthday. He spent 26 years as one of the greatest high school coaches in Iowa history, the last 19 as a model Hawkeye assistant under Kirk Ferentz.

The decision was something he and his wife, Jo, had discussed for a while. But he made it official by informing Ferentz on Tuesday night.

He said it won't be easy to walk away, but he knew it was time.

“It’s the greatest profession. It really, really is," Morgan said. "The feelings you get in a locker room after something special, money can’t buy. A corporate president can’t do that. It’s really special and unique.”

Morgan wore many hats at Iowa. He has been the recruiting coordinator and coached tight ends, offensive line and (most recently) defensive line. But there are two other things that he'll be remembered for the most.

One, his knack for uncovering talent gems. 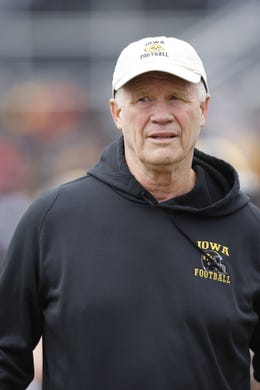 Reese Morgan, shown in this 2013 photo, spent the past 19 years as an assistant coach with Iowa. His connections around the state are legendary. Register file photo
Fullscreen 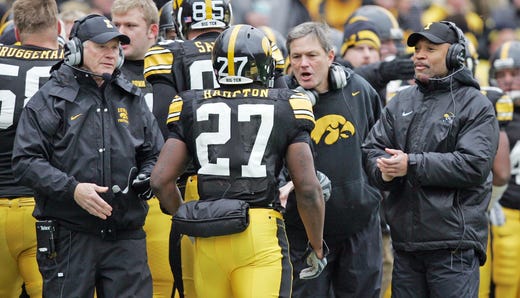 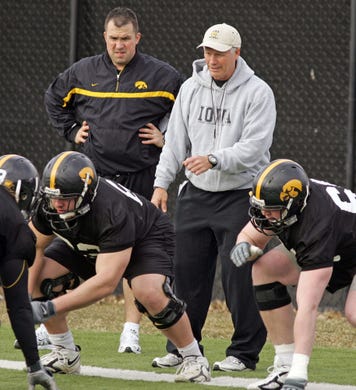 The Greenway story became an early example of Morgan going places where only he was seemingly willing to go. As Ferentz once put it, Morgan possessed "a rare ability to see things in prospects that others miss. When he’s high on a guy, it gets my attention.”

Ferentz didn’t always listen, like the time Morgan was advocating for a running back from Clinton named David Johnson. But he learned that Morgan was usually right.

You know some of the names.

Drew Ott, an eight-man football player from a Nebraska farm who became a dominant defensive end.

Josey Jewell, who was headed to Division III Luther College until Morgan convinced Ferentz to take a chance on a future consensus all-American linebacker.

And T.J. Hockenson, a skinny receiver who Morgan believed — after interviewing custodians and teachers at Chariton High School about his character — had all the tools to become a dynamic tight end.

And that leads us to the second — and most important — thing about Morgan: His meaningful impact on everyone he's met along the way.

Morgan confesses he's "not a technology guy," and he doesn't do email. But if he jumped on social media, he would've seen widespread praise pouring out for him on Twitter.

“Words can’t describe the impact this man had/has on my life,” wrote Casey Kreiter, a former walk-on at Iowa who was recruited by Morgan — and now is a Pro Bowl long snapper for the Denver Broncos. “Would not be the man and athlete I am today without coach’s support and guidance.”

Morgan said he's touched every time he gets an invitation to a wedding or someone he's impacted names a child after him.

"That’s pretty profound," he said. "We all get into this thing because we want to teach, we want to help, we want to mentor, and we want to make a difference in the lives of other people.”

Iowa assistant coach Reese Morgan, who has been on Ferentz's staff since 2000, discusses his boss' approach on the way to a school-record 144 wins. Hawk Central

The football loss will be hard to quantify for the Hawkeyes. Morgan got Iowa in the door and often to the front of the line in recruiting, especially in rural Iowa communities.

But the gain from those who know Morgan, that is what so many are talking about today.

His warm smile was always accompanied by a hearty handshake that sent the message of, "I care."

I had planned to produce a deeper story on Morgan last spring, knowing the impact he’s made on thousands of athletes. But life happened … and it didn’t get written. One of the people that caught wind of my plan at the time was Marshal Yanda.

You may have heard of him — he’s only the most dominant guard in the NFL. An all-pro with the Baltimore Ravens dropped what he was doing to sing Reese Morgan's praises to a reporter he'd never met.

“He preached to us never to become complacent,” Yanda wrote. “Always to stay humble and hungry. I was a very raw player when I came to Iowa. ... Coach Morgan was a big part of me becoming the player and person I am today."

Morgan is next headed to Arizona with his wife to visit family. He legitimately hasn't thought about what he'll do without football.

“I have no plan. I have no hobbies," he said. "I’ll probably do some odd jobs with our daughter down in Arizona, get to know the guy at Lowe’s or Home Depot a little better.”

For starters, he can respond to the text messages and voice mails he's already received. ("I know how to text now," he said.)

No doubt, there are a lot of people whose lives he's touched that would love to hear from this coaching legend again.