Columbus-bound Iowa has won 16 straight games out of conference and has played some of its best basketball on neutral sites this season.

And that could be, and should be, a good thing for the Hawkeyes.

It’ll be 10th-seeded Iowa vs. No. 7 seed Cincinnati at 11:15 a.m. Central on Friday in the first round at Nationwide Arena in downtown Columbus, Ohio. The Bearcats were early 3-point favorites, not a surprise since they’re playing within a 90-minute drive of their campus and are fresh off winning the American Athletic Conference tournament.

But even so, Iowa players are embracing the lack of familiarity their next opponent will have with them. Their last 20 games have been against Big Ten competition.

They're ready for something different. 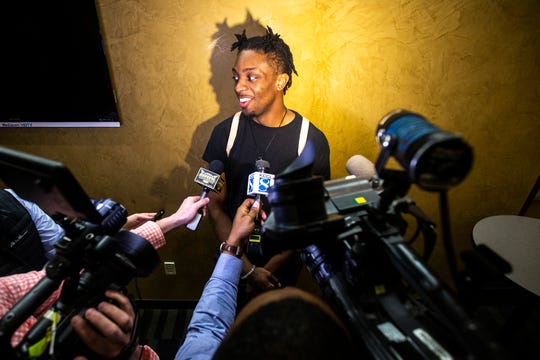 Junior forward Tyler Cook was pretty excited about seeing "IOWA" on the screen for the NCAA Tournament bracket. This is his first trip to the Big Dance with the Hawkeyes. (Photo: Joseph Cress/Iowa City Press-Citizen)

“Absolutely. Absolutely,” leading scorer Tyler Cook said, emphasizing the point. “I think teams in the Big Ten scout as good as anybody does in the country. We’ve played Big Ten guys our last 20 games obviously. It’ll be nice to see some new faces.”

Consider this statistic: Iowa has won 16 straight games against out-of-conference competition, dating to an 84-78 loss Dec. 7, 2017, at Iowa State.

The Hawkeyes have since beaten the likes of Drake, Colorado, Oregon, UConn, Pittsburgh, Iowa State and Northern Iowa without a loss. This season, Iowa went unbeaten in nonconference play (11-0) for the first time in 32 years.

And then consider this as further evidence that a lack of familiarity benefits Iowa: The Hawkeyes' first round against Big Ten competition went much better than the second.

“It’s a bar fight every night. It’s always a brawl,” Iowa senior Nicholas Baer said of the Big Ten grind. “It’ll be nice to play some people that haven’t been scouting us for 10 years or whatever.”

Considering Fran McCaffery has been here nine years with the same core assistant coaches, opposing conference programs have a detailed plan of how to combat what Iowa does.

“You just have to make so many more adjustments. Then adjustments on top of adjustments. That just happens,” Baer said. “We have great teams in this league, and they do a great job of scouting us. And we do the same thing with them.”

There’s no doubt Cincinnati will be well prepared. This is the Bearcats’ ninth straight NCAA appearance, and Mick Cronin is a highly respected coach who brings a suffocating defense against every opponent his teams face.

But for unfamiliar foes, this Iowa basketball team can be a challenge to defend. Among its starting lineup, Iowa can present two big men who can score in Cook and Luka Garza. It has a versatile wing in freshman Joe Wieskamp. It has a shooting guard that create his own shot in Isaiah Moss, and a point guard that can extend defenses with his range from 25 feet and beyond in Jordan Bohannon.

Of course, Baer and Ryan Kriener off the bench offer extra length that can be easily offset in the rugged Big Ten.

And, in this case, it might help Iowa match up with the physical nature of Cincinnati, too.

“It’ll probably be a bar brawl, that one,” said Baer, a knowledgeable basketball fan who knows that Cincinnati will be stingy. “That’s just how they play. They play physical.”

Who would Baer want on his side for a bar brawl?

“I’m taking Cordell (Pemsl) for sure,” he said of Iowa’s injured junior forward. “After that, I’m taking Tyler Cook. I don’t think anyone wants to mess with him.”

Kidding aside, McCaffery knew more about the Bearcats initially than his players did. He said he’s a good friend of Cronin’s and familiar with his style. Assistant coaches were already busy assembling a more detailed scouting report.

But for a 22-11 Hawkeye team that’s lost five of six games entering the Big Dance, knowing it will face some new blood provides confidence. Iowa played some of its best basketball this year in neutral-court settings — going 4-1 in those games, including a win against NCAA-bound Oregon and beat-downs of UConn, UNI and Illinois.

The Iowa-Cincinnati winner plays either No. 2 Tennessee or No. 15 Colgate on Sunday. Sixty-eight teams are dreaming right now. Why not Iowa?

“We’ve just got to make sure we’re locked in," Cook said, "playing the best basketball we can play."