Having third-year starters at tackle in Alaric Jackson and Tristan Wirfs gives Iowa a comfortable starting point in 2019.

IOWA CITY, Ia. — Spring football practices at Iowa are an important time for individual improvement. Sure, every drill is team-oriented, too. But the primary objective for Hawkeye coaches during these 15 workout is to push each young man to be a better player on April 26 than he was on March 26.

Come August, they'll focus on establishing lineups and preparing for the 12-game regular season ahead. 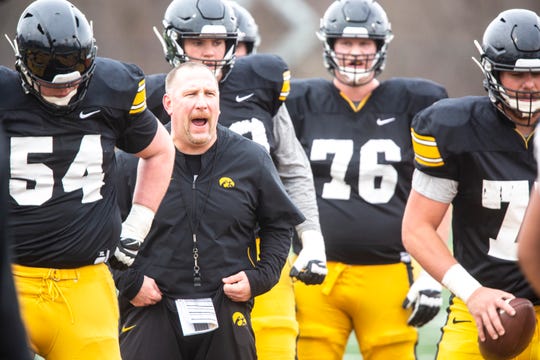 To that end, Tuesday’s seventh Hawkeye practice of spring ball prompted offensive line coach Tim Polasek to experiment with his 320-pound offensive tackles. He moved Alaric Jackson from the left to the right and Tristan Wirfs from the right to the left.

Both players have been comfortable in their roles, and it’s unlikely they’ll switch going into Year 3 as starters. But Tuesday, the goal was to take two of the Hawkeyes’ best players and make them a tad uncomfortable.

Jackson and Wirfs are two giant reasons that should give Hawkeye fans optimism entering the 2019 season. The future NFL blockers will offer the best edge protection that quarterback Nate Stanley could ask for as a third-year starter.

When spring practice opened two weeks ago, Iowa’s head coach commented that if Wirfs “can move defensive guys around like he’s moving weights around, that’s the next challenge.”

Wirfs was pretty happy to discuss breaking Brandon Scherff’s hang-clean lifting record, but he was also happy to address the challenge Ferentz issued to him.

“I 100% agree. That’s the next step,” Wirfs said Tuesday. “I’ve got to take moving weight in the weight room onto the field. That’s what I’ve been trying to do this spring, really move guys off the line of scrimmage. I’m all for it.”

But about that lift … it was worth its own story.

After completing two lifts at 420 pounds in the hang clean a few weeks earlier, Wirfs was motivated to break Scherff’s record. Strength and conditioning coach Chris Doyle sent Wirfs that video, to show him that lifting 420 was not difficult for him. So, the 20-year-old  from Mount Vernon eagerly studied the video "for a whole week" and psyched himself up for a bigger lift on max-out day.

The result: four reps at 450 pounds, a deferential tweet by Scherff (a Pro Bowler for the Washington Redskins) and Internet fame. The video of Wirfs being mobbed by his teammates after the lift got more than 1.4 million views.

You wanted video, so here it is! Tristan Wirfs making light work of 450 🏋🏾‍♂️ | #BreaktheRockpic.twitter.com/gBonZQjc4B

“That’s the most I’ve ever lifted before,” Wirfs said. “When I picked it up off the rack, it felt lighter than I expected. The atmosphere had something to do with it.”

Not exactly a hot take but ... don’t sleep on Jackson.

The 6-foot-7 left tackle (who plays there because he’s stronger with his left hand than his right) came to Iowa needing to get leaner, and he’s done that by vastly improving his core strength.

“He gets kind of overshadowed in the weight room because of Tristan, at times,” Polasek noted. “… He’s really detailing his work. He’s getting his pads on people. He’s not a guy that reaches for blocks.”

About the rest of the O-line: As always, the race is on to find Iowa’s five best blockers.

We can safely say Jackson and Wirfs are the top two.

Although Polasek didn't rank the rest, it's reasonable based on last year's playing time and Tuesday's quotes that Cole Banwart (who started seven games a year ago at right guard) is No. 3, either at center or right guard. And with 4½ months until the Aug. 31 opener against Miami of Ohio, the tea leaves tell me that freshman Tyler Linderbaum is on track to be the starting center.

Senior Levi Paulsen would then be the top swing guy, ready to start at right guard (if Linderbaum isn't ready, cementing Banwart at center) or at tackle (if Jackson or Wirfs is banged up). Senior Landan Paulsen and sophomore Mark Kallenberger getting most of the left-guard reps.

Speaking of public challenges, Polasek certainly issued one to Kallenberger.

It was asked: Where does Kallenberger fit in?

“It’s getting to be a better question for Mark,” Polasek responded. “We’re creating plenty of opportunity.”

Polasek sounded like a coach who sees overflowing potential ... but underwhelming results.

“That’s one of those deals where me and Mark have had a lot of conversations. It’s going to be a case of … 'Are you ready when your opportunity strikes?'” Polasek said. “Some days, he’s pushing it through, other days, we take a couple steps back. I’m hopeful for Mark. I’m wishing the best for him.”

There was lots of run-game talk Tuesday, too. The common theme?

That message was certainly consistent from Derrick Foster as the second-year running backs coach met the media. Foster brings back his top three runners in Sargent (745 yards), Toren Young (637) and Ivory Kelly-Martin (341).

After the season, Foster went through every carry by the trio (392 total) on film and went through missed reads. To be fair, though, all three were in their first year in the spotlight after the departure of electric, two-time 1,000-yard rusher Akrum Wadley.

“I think we’ve identified the mistakes,” Foster said. “So, I’m trying to train these guys to look at certain things and ignore certain things. Sometimes, running back eyes can get a little busy. We missed certain cuts.”

That’s the number Polasek wants. Foster agreed and thinks it’s within reach, considering Sargent and Young each averaged 4.7 a year ago. But Iowa's 3.95 average for the season ranked 94th in FBS. Not nearly good enough.

The key to getting to 4.5? It all circles back to explosive plays.

“If we could hit five explosive plays per game over 20 yards, we’re on track,” Polasek said. “That’s championship-level football.”