Leistikow: 4 thoughts about Iowa's No. 20 ranking in The Associated Press' poll

Good to have the preseason buzz or not? A (first-ever) Cy-Hawk showdown of ranked teams? Let's have one more conversation about expectations.

Leistikow: 4 thoughts about Iowa's No. 20 ranking in The Associated Press' poll

Hear what Iowa's head coach had to say about the practice, the progress, Toren Young, the kickers and backup QBs. Hawk Central

For only the second time in nine seasons, the Iowa football program finds itself ranked in The Associated Press' preseason Top 25.

The Hawkeyes were pegged Monday with a No. 20 ranking among a panel of 62 sportswriters and broadcasters, just 12 days before they kick off the season Aug. 31 against Miami of Ohio. This ranking is aligned with the earlier-this-month No. 19 spot that Kirk Ferentz’s 2019 outfit received in the USA TODAY Amway Coaches Poll.

1. Big deal? Yeah, sure. The national conversation begins with the Hawkeyes as a top-20 program.

I know the theory that Iowa teams fare much better when the expectations are lower. So, there are some fans (and probably some Iowa coaches) who would rather have nobody talking about them, as was the case before the 2015 season — when Iowa had zero preseason poll votes and didn’t make its top-25 debut until after winning at Wisconsin to improve to 5-0. That team finished 12-0 in the regular season and within a yard of the College Football Playoff. 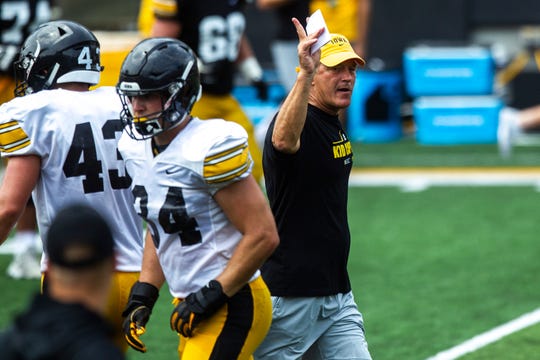 There’s historical backing for some of those fears, worries and apprehensions. Iowa hasn't both started and finished a season ranked since 2009.

In 2016, the C.J. Beathard/Desmond King/George Kittle Hawkeyes started at No. 17 and were heavy Big Ten West favorites — but, again, they crashed out. A home loss to North Dakota State and an Outback Bowl blowout loss against Florida are lasting memories from that disappointing 8-5 campaign.

Starting in the AP poll means nothing compared with where the eventual CFP rankings place Iowa in November. But starting at No. 20 gives Iowa a better chance at being included in the national narrative as a top-25 program for when those rankings matter. Plus, it’s a lot more fun to be a fan (or a player) for a team with some buzz.

2. Let’s say the Hawkeyes beat Miami and Rutgers to open the season, as they’ll be heavily favored to do.

Then the 2-0 Hawkeyes could be ranked, oh, about 17th against 1-0 and almost certainly ranked Iowa State (which is 21st in the preseason AP poll) heading into that Sept. 14 showdown in Ames. As far as I can tell, the Cy-Hawk matchup has never pitted two AP-ranked opponents.

The excitement will be off the charts at Jack Trice Stadium. And guess what? It won't be deemed a bad loss for Iowa, should the Cyclones prevail in this matchup for the first time since 2014.

3. Even with high expectations, there’s plenty of chip-on-the-shoulder stuff Iowa coaches and players can grasp.

Nebraska, a team that went 4-8 last year and has been outscored 155-72 over the past four Iowa matchups, was the media's pick to win the Big Ten West.

According to Las Vegas, Nebraska (5-to-2), Wisconsin and Purdue (both 3-to-1) all have better odds to win the West than does Iowa. The Hawkeyes, tied with Minnesota at 4-to-1, are hardly entering the wild West with the only target on their backs.

And don’t forget, Vegas pegged Iowa’s regular-season win-total line at 7.5. That means an 8-4 season would exceed expectations in the desert. And, rest assured, the internal expectation for the Hawkeyes is better than 8-4.

4. We’ve heard and read a lot about the tough road schedule.

... And the AP poll backs that up. Four of Iowa's five road opponents are ranked — the No. 21 Cyclones, No. 7 Michigan (Oct. 5), No. 19 Wisconsin (Nov. 9) and No. 24 Nebraska (Nov. 29). The other road opponent is Northwestern (Oct. 26), which is hardly a slouch as the reigning Big Ten West champ and winner of three straight vs. Iowa. (The Wildcats were ranked five spots outside the AP Top 25, but were slotted 25th in the coaches' poll.)

This schedule is going to be a grind, especially as Iowa wears a top-20 bull's eye. But if Iowa has a good football team — and, when healthy, I happen to think it does — then it'll win most of those tough games. And that'd mean a special season, from start to finish.