With the real games just days away now, Chad Leistikow goes through all 12 games on the Iowa football schedule.

And, yes, we're almost to the games.

Iowa football is oh-so-close now; you can count the days on your hands until "Back in Black" is booming at Kinnick Stadium, just moments before the 6:30 p.m. opener Aug. 31 against Miami of Ohio.

While we wait just a little longer, I've put together my annual game-by-game predictions. These are supposed to be fun and informative; so don't take them too seriously. But they do reflect my regular-season record prediction for the Hawkeyes. 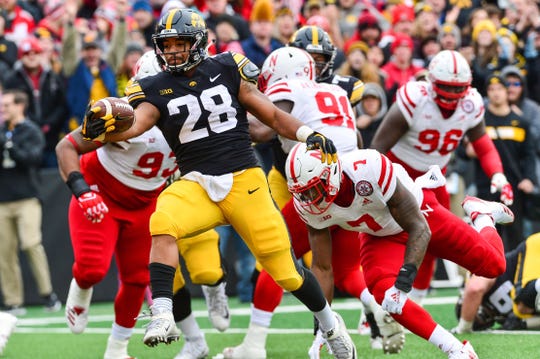 The road to the Big Ten Conference championship game will require good luck with injuries and timely breaks on the field in critical games. As you'll see, there are a lot of critical games in 2019.

But this Hawkeye team has the horses to get it done.

So, for now, a little more talk. Soon, a lot more action.

Sixth-year coach Chuck Martin returns to Kinnick Stadium after his 2016 RedHawks (Miami’s only bowl team during his tenure) lost, 45-21, in Iowa City. Miami has been competitive in the always-feisty Mid-American Conference; it went 6-2 in league play a year ago. There’s a familiar name in Miami’s secondary. Cornerback Manny Rugamba, who played two seasons at Iowa (including three starts as a true freshman), enters his redshirt junior year.

Chad says: The Hawkeyes were early three-touchdown favorites, with Miami having lost 13 starters. A big offseason priority for Iowa is establishing the run game, and offensive coordinator Brian Ferentz will do what he can to make that happen in Week 1. Coaches have been wanting to unleash Toren Young a little bit more, and I think this is his day. Young (who had eight carries for 84 yards in last year’s opener) posts another fast start. This time, it results in his first career 100-yard rushing game.

Iowa’s Big Ten East crossover partner from 2022 through 2027 will make its first visit to Kinnick Stadium — probably with a 1-0 record after dispatching UMass. Will the Scarlet Knights’ quarterback be incumbent Art Sitkowski or left-handed Texas Tech transfer McLane Carter? And does it matter? Rutgers scored an FBS-worst 13.5 points a game in 2018.

Chad says: While the Hawkeyes face a daunting 2019 schedule, their first two opponents should be akin to NFL preseason games: A good chance to work out some kinks with the starters, then get a lot of inexperienced players involved. Nate Stanley will deliver a turnover-free, four-touchdown day, and punter Michael Sleep-Dalton will pin Rutgers deep in its own territory all afternoon as Iowa cruises in its Big Ten opener.

Matt Campbell doesn’t put a lot of stock into preseason expectations. He says his program would have crumbled three years ago if players listened to expectations Des Moines Register

While replacing immensely talented David Montgomery and Hakeem Butler on offense will be a challenge for Iowa State, the talk is that the front seven on defense could be the best in Cyclone history. I agree, this will be one of three best defenses Iowa faces all year. Matt Campbell is 0-3 against Iowa, a blemish he no doubt would love to change.

Chad says: Astute prediction watchers will recall that last year, I flipped my preseason pick on this game and ultimately took the Hawkeyes to beat Iowa State after the Cyclones’ opener was cancelled. I loved how that set up for Iowa — playing at home with a game under its belt against a team playing its first full game in a hostile environment. This year, I think the tables are completely flipped. Iowa State will be 1-0 and coming off a bye week, while Iowa will be fresh off a Big Ten game and be headed to unfriendly territory in Jack Trice Stadium. The Hawkeyes can’t afford to be tentative on the road and escape like they did in 2017. Playing catch-up against this Cyclone D won’t work out well.

The Blue Raiders made the Conference USA title game a year ago but now must replace prolific quarterback Brent Stockstill, who led the program to 30 wins and four bowl games in four years. The Hawkeyes will be coming off the first of two off weekends, an opportunity to heal any CyHawk nicks.

Chad says: Iowa’s athleticism (yes, I said it) should shine against the blue-collar Blue Raiders. Ihmir Smith-Marsette will record the first kickoff-return touchdown of his career, and Tyrone Tracy Jr. will enjoy his best game as a Hawkeye in a get-well rout. Coaches have talked about using the four-game rule for many true freshmen, and this should be a prime opportunity to get them valuable experience.

Iowa returns to the Big House for the first time in seven years, dating back to an ugly 42-17 loss in 2012 that most Hawkeye fans have purged from their memories. However, the Hawkeyes have had Michigan’s number — with wins in five of the last six meetings (2009, 2010, 2011, 2013 and 2016). An early Vegas line showed Michigan as a 14½-point favorite, indicating the challenge ahead.

Chad says: The schedule sets up beautifully for Michigan, with the Iowa revenge game sandwiched between matchups against … (drum roll) … Rutgers and Illinois. This will be the most talented roster Iowa faces all season. The Wolverines will score on special teams, and Shea Patterson will have a big day in Michigan's power-spread offense.

We don’t know yet who Penn State’s quarterback will be: Will Levis or Sean Clifford? But we know who it won't be: Trace McSorley, who went 3-0 against the Hawkeyes over three frustrating years for Iowa. Whoever is under center for the Nittany Lions will be playing his first snaps at Kinnick Stadium, probably in a heated night environment.

Chad says: A great spot for Iowa. In addition to being the (all-gold) alternate-jersey game, there’s an excellent chance the Nittany Lions will be 5-0 and ranked in the national top 10 coming to Kinnick. And we know how that usually turns out for the top-10 team. If the Hawkeyes are indeed 3-2 at this point as I’m predicting, they’ll be hungry and in a major revenge spot. Stanley plays better at home, and he’ll find Nate Wieting and Shaun Beyer for TDs on a feel-good Saturday night.

In the back half of October, we finally reach Iowa’s first Big Ten West opponent. Jeff Brohm is 2-0 vs. Kirk Ferentz, and the formula has been the same in both wins: Find Iowa’s weakest corner, and go for the jugular. The Boilers will likely have Elijah Sindelar under center; he directed a surprising win at Kinnick in 2017. The potential Rondale Moore/D.J. Johnson matchup will be a key.

Chad says: The Boilermakers are worried about their offensive line, and that plays right into Iowa’s defensive-line strength. As long as the corners hang hold up those explosive receivers for a few seconds, A.J. Epenesa and Chauncey Golston should have monster days. The offense is going to have to be good this time around, especially against high-powered Purdue.

Chad says: This comes down to a statistic I wrote about earlier this summer: Iowa’s rush defense. It’s been unacceptable vs. the Wildcats the last three years. (Although, to be fair, Iowa played without Josey Jewell in Evanston in 2017.) After giving up an average of 176.3 rushing yards a game in that span, the defensive-tackle trio of Cedrick Lattimore, Daviyon Nixon and Brady Reiff help hold Northwestern under 100. This will prove to be a key swing game in the Big Ten West.

My opinion on Wisconsin has changed in the last month, although my game prediction has not. The Badgers should be a lot more imposing on their defensive line than I initially thought, and (yes) could be better at quarterback than they were with Alex Hornibrook. And then there’s the Jonathan Taylor factor. He’s the best running back in the conference; maybe the country.

Chad says: Both teams should be well-rested, fresh out of their second off week. It’s a bucket-list item for Stanley, a Wisconsin native, to win a game in Camp Randall. He certainly would love redemption after his forgettable 2017 performance there. But this is a tough building and a well-coached opponent. Taylor breaks the tie, and Albert the Bull (Drew Ott’s nickname for the Heartland Trophy) stays with Bucky.

The Gophers are not to be dismissed. They may have the best set of running backs/receivers in the West. And thanks to a friendly schedule, they could very well ride into Kinnick with a mark of 7-2 or 8-1, heading into a telling three-game finish (at Iowa, at Northwestern, vs. Wisconsin).

Chad says: In mid-November in Kinnick, physicality usually reigns. And in this matchup, I think the more seasoned Hawkeyes can overwhelm the younger Gophers. Mekhi Sargent was Mr. November for Iowa a year ago, and I’ve got him picking up steam again with a 100-yard, two-touchdown game as Iowa improves to 3-0 vs. P.J. Fleck.

For the third time in four years, Iowa plays Illinois in the next-to-last game of the regular season. Iowa has outscored Illini by an incredible 136-16 over the past three season (with wins of 28-0, 45-16 and 63-0).

Chad says: This is the point in the season where coach Lovie Smith’s team is usually crumbling. Still, this is a letdown spot (as Iowa's only non-trophy game in November), so it’s not the usual runaway. Stanley, Epenesa and Tristan Wirfs play their final games in Kinnick Stadium, with Stanley fittingly breaking Chuck Long’s career passing-touchdown record (74) in the fourth quarter.

Adrian Martinez is the most dynamic quarterback in the league, and the Huskers are certainly gaining traction in Scott Frost’s second year. They could very well be 9-2 coming into this showdown with a ton of momentum. The biggest Nebraska question is how quickly it can patch up its terrible 2018 defense.

Chad says: For the first time since the Cornhuskers joined the Big Ten (2011), the Iowa-Nebraska game will decide a division championship. The Hawkeyes won’t be intimidated in Lincoln, having won three straight there. Playing keep-away from Martinez with time of possession is crucial. While Miguel Recinos was last year’s Nebraska-game hero, Keith Duncan cements this one with a late, clinching field goal (his third of the game). And Iowa (9-3 overall, 7-2 Big Ten) celebrates its first trip to Indianapolis since 2015 on the Memorial Stadium turf.