Leistikow: The 3-0 start is good, but where do the Hawkeyes need to get better?

Leistikow: The 3-0 start is good, but where do the Hawkeyes need to get better?

Iowa offensive coordinator Brian Ferentz met the media during the bye week with the Hawkeyes owning a 3-0 record. Hawk Central

IOWA CITY, Ia. — And on the fourth Saturday, they’ll rest.

With three pocketed wins and their next game not until Sept. 28 against Middle Tennessee State, Iowa football players are getting a much-needed Saturday off.

A regular game-week routine resumes Sunday. But Saturday will mark the end of a quiet yet important week inside the Hansen Football Performance Center. The first of two scheduled bye weeks allowed coaches to make big-picture assessments of where the team is at, and where it's going in order to stay in the Big Ten Conference championship hunt. 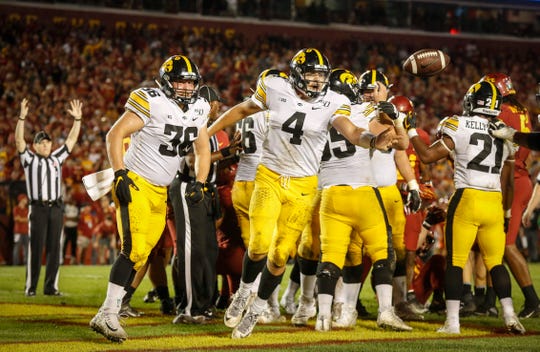 On Wednesday, the 18th-ranked Hawkeyes’ three coordinators — offense, defense and special teams — met the Iowa media. The message following an emotional, 18-17 win at Iowa State, the program’s 14th successful trophy game in the last 17, was one of satisfaction of having the best record they could have through three games: 3-0.

But they also know there’s a long way to go and a lot of improvement to be made. Here are three topics — one from each coordinator — that warranted (and got) further discussion.

OFFENSE: About that end-of-half clock management …

Iowa offensive coordinator Brian Ferentz correctly admitted Wednesday that in the last two games, he somewhat botched the ends of three different halves. But while listening to Ferentz, the end goal in each case was a valid one — not giving the ball back to the other team.

Against Rutgers, Iowa found itself with a first-and-goal at the 1-yard line with only a few seconds left and settled for a Keith Duncan field goal, despite having two timeouts remaining. Probably tried to get too cute, Ferentz said.

“That falls on my shoulders,” Ferentz said. “... and probably cost an us opportunity to score six points.”

Against Iowa State, Iowa had first-and-10 at Iowa State’s 24 but allowed the second-quarter clock to wind to 21 seconds before calling the first of three timeouts. Nate Stanley ended up throwing back-to-back underneath passes (for a total of three yards) before Iowa kicked a field goal. Upon hearing Ferentz’s explanation — they had end-zone shots called, but they were well-covered — that one was less egregious.

“Certainly, you wish you could come away with six points,” Ferentz said. “But just that's not going to be the reality at the end of every half.”

And then Ferentz said it was a bad play call to throw the ball toward the sideline with under 2 minutes to go in the game in Ames, knowing Iowa State was out of timeouts. Nate Wieting stepped out of bounds short of the first-down marker, potentially saving the Cyclones about 40 seconds of game clock. Although that gaffe ultimately didn’t hurt the Hawkeyes, that’s one the Hawkeyes would like to do over.

Ferentz's goal by calling the pass was to get a first down to clinch the game. Right concept, misguided approach to throw a pass that close to a boundary.

"It's not so much about trying not to lose the game. Although, the greatest football coach I've ever been around (presumably Bill Belichick), his whole mantra was, 'You can't win it until you don't lose,'" Ferentz said. "So everything you do, you're trying not to lose the football game — but that's how you win. You just try to make smart decisions, which I don't think we did."

Fixing those details could be the difference between having a special season or not. Better to learn those lessons with a victory than a dagger of a defeat.

Iowa defensive coordinator Phil Parker says he's trying to work on the 4-2-5 as much as possible despite so many secondary injuries. Hawk Central

DEFENSE: The challenges of developing a needed 4-2-5

Phil Parker is tough to please; that’s one of the things that makes him so good as a defensive coordinator. On Wednesday, he ruminated about poor tackling and poor communication through three Saturdays, even though his Hawkeyes are tied for 10th nationally in allowing 10.3 points per game.

“Just not a lot of information being retained in certain areas we need,” Parker said.

Iowa was hit for long touchdowns over the top of young defensive backs D.J. Johnson and Jack Koerner (each making his second career start) against Iowa State. Iowa’s banged-up secondary has been one of many reasons that Parker has stuck with a 4-3 alignment, instead of trusting the 4-2-5 which became Iowa’s base for most of the final nine games last season.

But Parker assured us that the 4-2-5 is not dead yet. The problem is getting meaningful reps with defensive backs Matt Hankins (hamstring), Julius Brents (knee), Kaevon Merriweather (foot) and Riley Moss (leg) recovering from injuries. He’s dabbled with true freshman Dane Belton at the cash position in the 4-2-5 during the bye week, along with giving other young players (such as linebackers Dillon Doyle and Seth Benson) a chance to get more reps than usual.

Bottom line: Parker needs to develop the 4-2-5. But when push comes to shove, his 4-3 — with Nick Niemann at outside linebacker — gives him the most overall comfort.

“If (the 4-2-5) helps us, we’ll use it. But it’ll be a gradual opportunity. You can only do it so many times a game,” Parker said. “With the linebackers we have, they’ve done a good job. You always want your best players on the field."

Special-teams coordinator LeVar Woods deserved a game ball after the Cy-Hawk win. His kicking game (with Keith Duncan going 4-for-4 on field goals in wet conditions) and punting game (with Michael Sleep-Dalton flipping the field consistently, not to mention delivering the game-clinching turnover) were the primary differences in a one-point rivalry win.

Woods, though, wants to clean up penalties. Iowa special teams have been flagged five times in three games.

“That’s too many for a team like us, that we want to make sure we’re playing turnover- and penalty-free,” Woods said.

He also pointed to the return game needing improvement. On that note, the conversation steered toward the early adventures of freshman Nico Ragaini while returning punts.

Week 1? Ragaini faced a traditional punter from Miami of Ohio. (A good chance to get his feet wet.)

Week 2? A rugby-style punter against Rutgers that kept him guessing. (It did not go well.)

Week 3? An Iowa State punter that could do both. (It was Ragaini's best game.)

“He had two games right away that were real good tests for him,” Woods said. “… My point is, I think you’re only going to see him get better, making a decision fielding balls and getting more confident returning the ball.”

Ragaini delivered a big 15-yard punt return to set up Iowa’s lone touchdown against the Cyclones. Although Woods understands it’s a work in progress, he likes Ragaini’s ability to operate in traffic and catch the football — and endorses his being the punt-return guy going forward.