Leistikow's Big Ten picks: 5 things I'd like to see from Hawkeyes vs. Middle Tennessee

Leistikow's Big Ten picks: 5 things I'd like to see from Hawkeyes vs. Middle Tennessee

IOWA CITY, Ia. — After Nate Stanley makes his 30th consecutive start as an Iowa quarterback Saturday, only Chuck Long (47 starts), Matt Sherman (32) and Matt Rodgers (31) will be ahead of him in Hawkeye history.

That serves as a reminder that Hawkeye football and Stanley have been synonymous for quite some time. It’s also a reminder that someone new will soon be taking the quarterback reins from Stanley, a senior in the homestretch of his terrific career.

That brings us to 14th-ranked Iowa’s 11 a.m. contest against 1-2 Middle Tennessee State. The Hawkeyes (3-0, 1-0 Big Ten Conference) are favored by 23½ points in this ESPN2-televised matchup, the most lopsided spread they’ll likely have all season. As I outlined earlier this week, an opponent such as MTSU (with a solid, proven mid-major pedigree) cannot be taken lightly.

But there is an opportunity at Kinnick Stadium, if things go well, to get a glimpse of the post-Stanley future. And the backup quarterback situation leads off the five things I’d like to see from the Hawkeyes on Saturday. 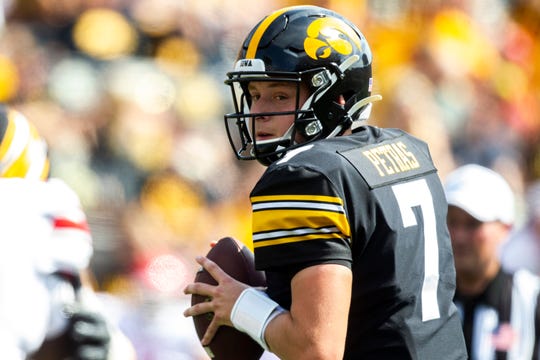 Spencer Petras is 3-for-6 for eight years in mop-up duty this season, but the redshirt freshman backup quarterback could get some time Saturday against Middle Tennessee State if all goes well for the Hawkeyes. (Photo: Joseph Cress/Iowa City Press-Citizen)

No. 1: Extended time for Spencer Petras.

A full fourth quarter would be great (with Stanley remaining healthy, of course). Petras, the redshirt freshman from California, getting a meaningful series or two with the No. 1 offensive line would be a bonus if the Hawkeyes can jump ahead 35-3 (or so) by the third quarter.

The way Stanley spoke about Petras earlier this week offers confidence that the quarterback position is in good hands.

“He has a very good grasp on the offense,” Stanley said. “We watch a lot of tape together. I feel confident he would be able to step in and the offense wouldn’t miss a beat.”

In addition, Stanley noted, “I’ve seen him make all the throws. He’s got a strong arm.”

What also stands out about Petras (6-foot-5, 230 pounds) is an affable personality that makes him an approachable, enjoyable teammate. Ferentz in the summer called Petras one of the funniest guys on the team, wearing his Golden State Warriors jersey around the building. He sounds like a potential fan favorite.

But to be clear, offensive coordinator Brian Ferentz on our radio show Wednesday said Petras and Peyton Mansell remained neck-and-neck for the backup job. Seeing both Saturday would be a plus, considering the opportunities ahead are slim to none as long as Stanley stays upright.

“Feel really confident in both of those guys,” Brian Ferentz said. “That’s probably the best compliment I could give them. If they did have to go in and play (due to a Stanley injury), they’d both be able to execute the offense and do the things we want to do."

The Hawkeyes’ three sacks are tied for last in the Big Ten, hardly the pace that was expected after the team racked up 35 (the most since 2002) a season ago. Middle Tennessee State’s offensive line has allowed nine sacks this season. It seems like a major opportunity for A.J. Epenesa and sackless Chauncey Golston to wreak havoc.

If they do, it’ll offer more of an opportunity for backup defensive ends Zach VanValkenburg and John Waggoner to get meaningful snaps. The Hawkeyes are going to need both of them this season.

While we’d all agree the Hawkeyes’ ground game looks better than a year ago, the explosive plays from running backs haven’t been there. Only two of Iowa’s 117 carries have topped 20 yards (31 by Toren Young, 22 by Mekhi Sargent), and the 4.4 yards-per-carry average is below the preseason team target of 4.5. As a program, Iowa hasn’t had a running play top 40 yards in — close your eyes — their last 650 rushing attempts, dating to a garbage-time, 57-yard run by Ivory Kelly-Martin at Nebraska in 2017.

It’s long overdue to change that stat. Middle Tennessee State is allowing 222 rushing yards per game and 5.0 per carry.

No. 4: Dillon Doyle getting some early time at linebacker.

That’s nothing against Kristian Welch or Djimon Colbert, Iowa’s two leading tacklers. It’s an acknowledgment that Kirk Ferentz on his radio show this week referenced that there was hardly a difference between starters and backups a linebacker.

Let’s see Doyle, the redshirt freshman and former Iowa City West product, get a long, early leash at middle linebacker. I’ve heard nothing but terrific things about the young man … and the last time Iowa had a linebacker wearing No. 43, it worked out pretty well.

No. 5: No further significant injuries.

That could be said any week, of course, but it’s especially true with the toughest part of Iowa’s schedule coming up — at Michigan, vs. Penn State, vs. Purdue, at Northwestern and at Wisconsin are the next five matchups.

Even so, the offensive and defensive lines should be able to control this one from start to finish and cover the big spread.

Heavy favorites covering big numbers is a theme in my Big Ten picks this week. Let's get to it.

Prediction: The Nittany Lions’ first road test of the season comes against a dangerous Terrapins team that leads the Big Ten in total offense. If Penn State can survive this week and next week's home date vs. Purdue, it'll come into Kinnick Stadium on Oct. 12 as a top-10, unbeaten team. Penn State's defense (allowing just 1.9 yards per rush) should be good enough to hold on in College Park, but just barely. Penn State 27, Maryland 24

Prediction: I completely missed the mark on the Badgers, having picked them to finish near the bottom of the Big Ten West. (Oops.) In fact, I had them losing this game to Northwestern before the season. (Oops.) There’s no way Wisconsin loses this one, with an overpowering line, a stingy defense and the best running back in the country. The Wildcats are typically only as good as their starting quarterback, and Hunter Johnson (48.5% completions, 4.5 yards an attempt, one touchdown, four interceptions) is not yet living up to his five-star status. Wisconsin 35, Northwestern 3

Prediction: If you’d have said preseason that Michigan would be favored by about the same total over Rutgers as Wisconsin would be over Northwestern … it would have sounded silly. But this crazy stat helps explain why: Michigan ranks 13th in the Big Ten in rushing defense. (Yikes.) That said, Rutgers ranks 14th. One of these Saturdays, Michigan’s overwhelming talent advantage should pay off. If it doesn’t against lowly Rutgers, the Wolverines are in big trouble. Michigan 38, Rutgers 7

Prediction: The Spartans have been marginal one week, great the next. After a dominating performance at Northwestern, that means it's a letdown week — especially considering a biggie at Ohio State is on deck. Indiana’s defense is allowing just 4.5 yards per play (and that includes a loss to the Buckeyes) and has a history of playing things close against the teams from up north. Michigan State 21, Indiana 17

Prediction: The Boilermakers were "hopeful" to get quarterback Elijah Sindelar (concussion protocol) back for this one. Not knowing his status makes this hard to pick. We do know that running back Shannon Brooks returns for Minnesota after missing all but one game a year ago with a knee injury. The Gophers are allowing 7.9 yards per passing attempt, 13th in the Big Ten. If Sindelar is back, give me the Boilers. Purdue 34, Minnesota 28

Prediction: At long last, I got a Nebraska game right last week — and even pegged the final four-point margin in a nail-biter at Illinois. This week, with ESPN’s “College GameDay” in town, Nebraska gets its first big-stage opportunity under Scott Frost. Although Nebraska played Ohio State incredibly tough last year in Columbus, the Buckeyes are bringing a ridiculously good defense (which has 20 sacks in four games) and running game (which is averaging 260 yards). Those two strengths play well against Nebraska’s biggest weaknesses. Ohio State 42, Nebraska 20