Chad Leistikow revisits five questions from Hawkeye fans, including about the 4-3 defense, blitzing and Jordan Bohannon.

There’s a reason that Iowa coaches decided a year ago to predominantly play a 4-2-5 defense, instead of the old-reliable 4-3: to keep up with the speed and pace in today’s college game.

But as clued-in Hawkeye fans know, the 4-2-5 has barely been used during 14th-ranked Iowa’s 4-0 start in 2019 because of an unusually high spate of injuries to defensive backs. And they also know that Saturday’s opponent, 18th-ranked Michigan, has a glut of four- and five-star talent at wide receiver.

Can Iowa’s 4-3 hold up? Or is it time to panic? That was a popular question among Facebook Live viewers Wednesday.

There’s no doubt that Michigan’s clearest path to victory is through the air. Iowa’s over-the-middle pass coverage, in particular, was deficient in the 18-17 win at Iowa State. Cyclones quarterback Brock Purdy went 13-for-19 for 211 yards and a touchdown on over-the-middle tosses in that game. Purdy's tosses beat Iowa’s linebackers and safeties in pass coverage, and no doubt Shea Patterson and the Wolverines will try to mimic that approach. 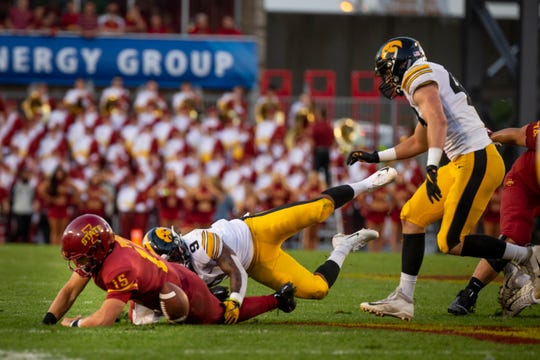 Creating turnovers, like Iowa did with Geno Stone against Iowa State, could be a key counter-point in the Hawkeyes' likely 4-3 approach at Michigan. (Photo: Brian Powers/The Register)

On the flip side, from Iowa’s perspective, the 4-3 could have some teeth at Michigan Stadium. The Wolverines are a surprisingly average rushing team, at 3.5 yards per carry (even in Saturday’s 52-0 rout of Rutgers, their run game was ineffective). And Iowa’s 4-3 will be a good run-game deterrent.

TOPIC: Do you expect more blitzes than usual from Phil Parker?

I do, but maybe not right out of the first-quarter gate. The Hawkeyes used a dozen second-half blitzes at Iowa State to derail that offense just in the nick of time.

Disguised blitzes are the most successful blitzes, and Iowa has experienced options with linebackers Kristian Welch, Djimon Colbert and Niemann and safety Geno Stone (44 combined career starts). Quarterback pressure also can help the secondary by forcing hurried or off-target throws.

The Wolverines have allowed nine sacks this season, so Iowa's unimpressive total of five should go up. Maybe this is the week A.J. Epenesa records his first strip-sack of the season.

The sophomore linebacker is looking forward to the challenge of heading to the Big House. Hawk Central

TOPIC: Can Nate Stanley win this game for Iowa?

Absolutely. The senior quarterback's strong stats (965 yards, eight touchdowns, zero turnovers) are a reflection of his command over Iowa's offense. Stanley's knack for checking into the best running play available is an underrated aspect of his craft.

Stanley needs to keep the chains moving Saturday like he has (Iowa has more than double the first downs of its opponents, 97 to 48). Sure, he could win it with his strong right arm if need be. But the fact that Iowa has faced fewer opponent snaps (51.5 per game) than any FBS team except Navy is a byproduct of Stanley's ability to efficiently and consistently direct the Hawkeye offense.

TOPIC: Are the running backs happy with the rotation? Will all four be Hawkeyes next year?

If you’re Mekhi Sargent, Toren Young and Tyler Goodson, absolutely you should be happy with how Brian Ferentz has managed the rotation. The Hawkeyes are winning games and you haven’t taken a daunting workload (Sargent has 54 carries, Young 33, Goodson 34). They’re high-character, team-oriented guys who see the big picture that fresher legs as the season progresses is a positive thing.

Obviously, junior Ivory Kelly-Martin has been the No. 4 guy, with only six carries after being the Week 1 starter last season. It’s way too early to project where he’s at a year from now, but considering the injury risk at running back, Iowa's going to need all four (Kelly-Martin did provide some clutch moments at Iowa State) before the season is up.

The Hawkeyes were picked eighth out of 14 in preseason Big Ten media polls, but I imagine many of those prognostications figured Iowa's senior point guard would return from hip surgery at some point.

Thinking Bohannon won't play until 2020-21, I picked Iowa to finish 10th. The best way for the Hawkeyes to contend for an NCAA Tournament berth is getting breakout performances from 2-3 guys — maybe Jack Nunge and CJ Fredrick off redshirt years and one of the point guards (Connor McCaffery, Bakari Evelyn or Joe Touissaint). To expect that is a reach.

But that's why they play the games on hardwood, not paper.