Leistikow: 4 statistics that are defining the 2019 Iowa football team

Picking one statistic per assistant coach we interviewed, Chad Leistikow looks at the framework of the 6-2 Hawkeyes as they hit their second off week.

Leistikow: 4 statistics that are defining the 2019 Iowa football team

Iowa assistant coaches Kelvin Bell and Seth Wallace aren't ready to say this is, even though the numbers might suggest otherwise. Hawk Central

IOWA CITY, Ia. — Iowa has used 17 different defensive starters this season, yet the Hawkeyes have been remarkably consistent anyway on that side of the football. The defense has been the catalyst in No. 19-ranked Iowa achieving a 6-2 start as it enters the second idle week of the 2019 season.

"The guys you recruit, what you expect them to do when they get here and the style of play that we have and the scheme that we have, there are very little changes,” Bell said. “You can take guys from six or seven years ago that can come back and tell you what you’re doing, defensively. 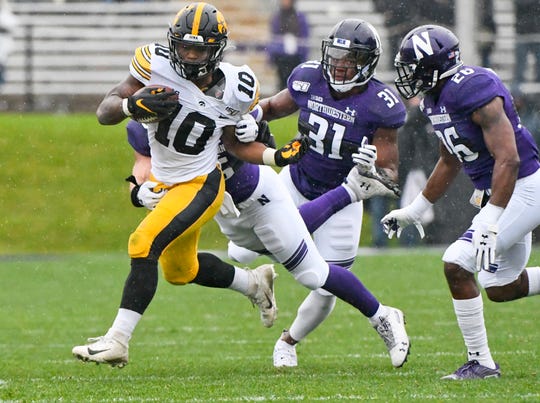 Running back Mekhi Sargent is Iowa's leading rusher, at 443 yards through eight games, in what will continue to be a by-committee approach down the stretch. Sargent rushed for 745 a season ago. (Photo: Matt Marton, Matt Marton-USA TODAY Sports)

“That type of continuity, from a scheme standpoint, helps you plug and play more than making wholesale changes, year in and year out.”

With Tuesday’s format, I thought it would be interesting to delve into four key statistics — one revolving around each coach — that have defined the Hawkeyes through two-thirds of the regular season:

Iowa’s linebackers coach and assistant defensive coordinator dismissed the notion that this is an “elite” defense, even though the numbers might suggest otherwise.

Iowa’s aforementioned scoring defense ranks No. 3 nationally and is on pace to best the 2008 Hawkeyes as the best scoring defense of the 21-year Kirk Ferentz era (13.0 points per game). Iowa’s 265.9 yards per game allowed also would be a Ferentz-era best (the 2009 team, at 276.5, holds the standard).

“I don’t know that there’s anything you can really put any weight in right now,” Wallace said. “Just look at the schedule that’s left for us and I think you’d have to look at it at the end of the year before you say that.”

It’s true that Iowa has played two of the nation’s five worst-scoring offenses in Rutgers (126th) and Northwestern (130th), but it’s also true Iowa’s defense has had a hand in those rankings. Iowa's next two opponents, Wisconsin and Minnesota, each average more than 35 points a game. How Iowa fares in those games, which could determine the Big Ten West champion, will speak volumes.

Iowa defensive assistants Kelvin Bell and Seth Wallace speak to the longevity of Parker and the system that the Hawkeyes use. Hawk Central

Iowa getting a season-high five sacks at Northwestern — with three coming in the late moments of the fourth quarter of a rout — inched the team’s average up to 2.0 per game. That’s 12th in the Big Ten Conference, only ahead of Northwestern (12) and Rutgers (nine), and well below the pace of last year's team, which racked up 35 sacks, the most in the program since 2002.

While Bell's defensive line has been very solid, it hasn't created big plays. Iowa had 20 interceptions a year ago — a byproduct of pass pressure — and has just six this fall.

It helps that Bell is finding more D-line depth as the games go on. Names like John Waggoner, Zach VanValkenburg, Joe Evans and Noah Shannon have worked their way onto the field in key moments the past few weeks. More bodies should keep stars like A.J. Epenesa fresher in November. One of Iowa’s strengths a year ago was steadily rotating eight bodies on the D-line.

“We talk about those guys all the time. They have to earn my trust during the week,” Bell said. “If I don’t trust you to play, I’m not going to put you out there.”

The fact that Iowa’s quarterback leads the conference in passing — despite having barely any production from tight ends — speaks volumes about the progress from Copeland's wide-receiver room.

Copeland, a third-year Hawkeye assistant, arrived in 2017 with a decimated receiving corps. Now, Brandon Smith (who is out at least another game; his right foot was still in a boot Tuesday) and Ihmir Smith-Marsette are in the top 10 in the Big Ten in receiving, and redshirt freshmen Nico Ragaini and Tyrone Tracy Jr. were practically every-down players at Northwestern.

“We do have more confidence in the receiver group right now,” Copeland said, “and in Nate being, obviously, a third-year starter — to go out and challenge us to get the chains moving.

"When I first got here in ’17, wasn’t so confident to always get that done."

"Pleased but not satisfied" with where the Hawkeyes' running game is through the 6-2 start. Foster also discusses Tyler Goodson's fast growth. Hawk Central

But, as Foster pointed out, running backs doing better in blitz pickups would help that per-carry average.

The core three running backs individually have been decent, with Mekhi Sargent at 4.5 yards per carry (on 98 attempts), Toren Young at 5.8 (on 62) and Tyler Goodson at 4.9 (on 64). Foster will continue to rotate all three in November, affirming head coach Kirk Ferentz’s dismissal of the need of a featured running back.

“All three of them are trustworthy ball carriers,” Foster said. “… We’ll go with the game flow (and) with who gets hot. I think it’s been working for us so far. And the guys have been very unselfish to this point.”